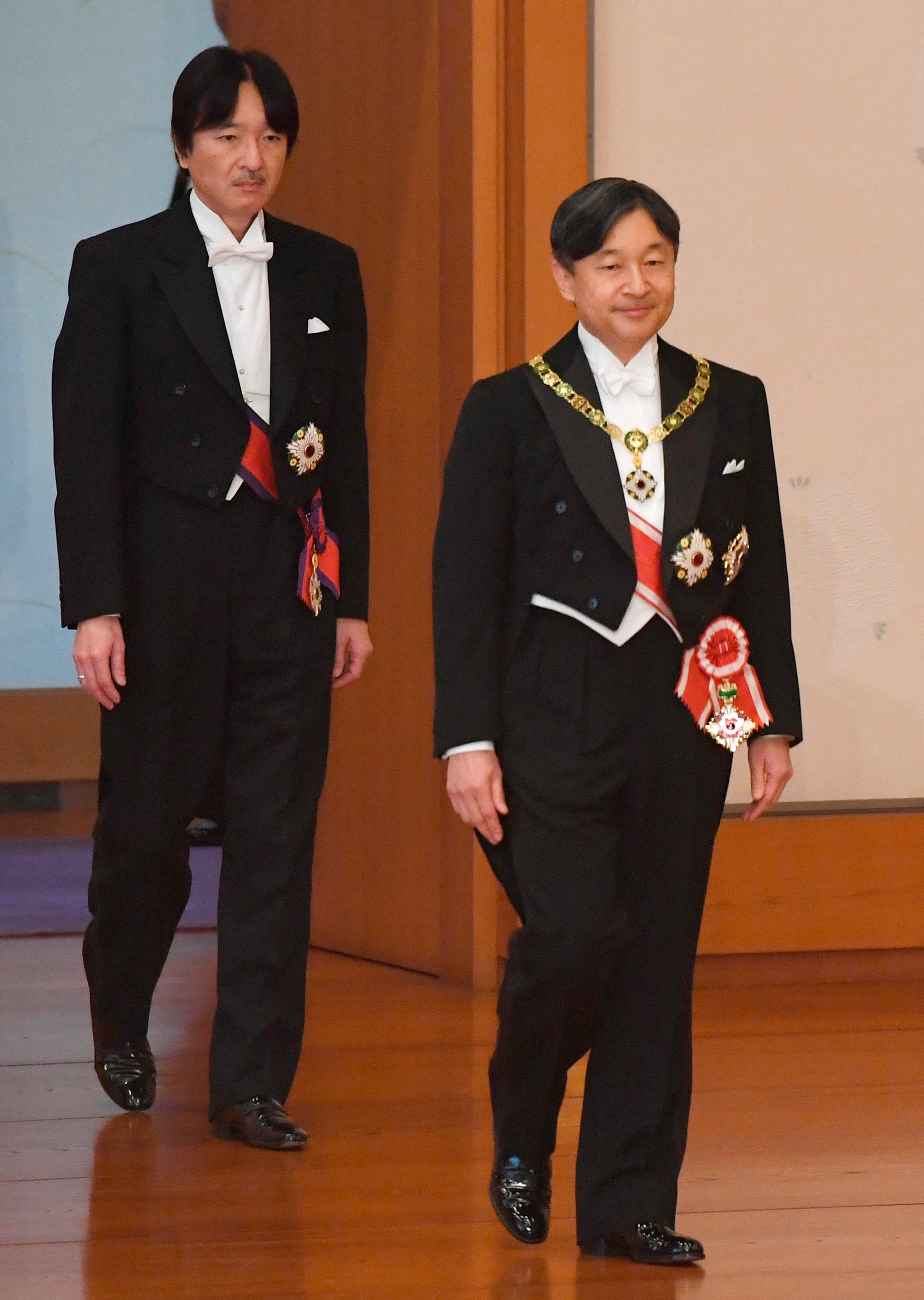 Japan’s new Emperor Naruhito, right, followed by Crown Prince Akishino, walks for the ceremony to receive the Imperial regalia of sword and jewel as proof of succession at Imperial Palace in Tokyo, Wednesday, May 1, 2019. (Japan Pool via AP)

TOKYO — Emperor Naruhito inherited the sacred sword and jewel that signaled his succession and pledged in his first public address Wednesday to follow his father’s example by devoting himself to peace and sharing the people’s joys and sorrows.

Naruhito, the first modern emperor to have studied abroad and the first born after Japan’s defeat in World War II, formally succeeded to the Chrysanthemum Throne at midnight after his father Akihito abdicated Tuesday.

“When I think about the important responsibility I have assumed, I am filled with a sense of solemnity,” Naruhito said in his address.

While noting his father’s devotion to praying for peace, Naruhito said he’ll “reflect deeply” on the path trodden by Akihito and past emperors. He promised to abide by the constitution that stripped emperors of political power, and to fulfill his responsibility as a national symbol while “always turning my thoughts to the people and standing with them.”

“I sincerely pray for the happiness of the people and the further development of the nation as well as the peace of the world,” he said.

Naruhito is considered a new breed of royal, his outlook forged by the tradition-defying choices of his parents. Emperor Emeritus Akihito devoted his three-decade career to making amends for a war fought in his father’s name while bringing the aloof monarchy closer to the people. Naruhito’s mother, Michiko, was born a commoner and was Catholic educated. Together, they reached out to the people, especially those who faced disability, discrimination and natural disasters.

Naruhito was presented with the Imperial sword and jewel, each in a box and wrapped in cloth, at a morning ceremony that marked his first official duty. 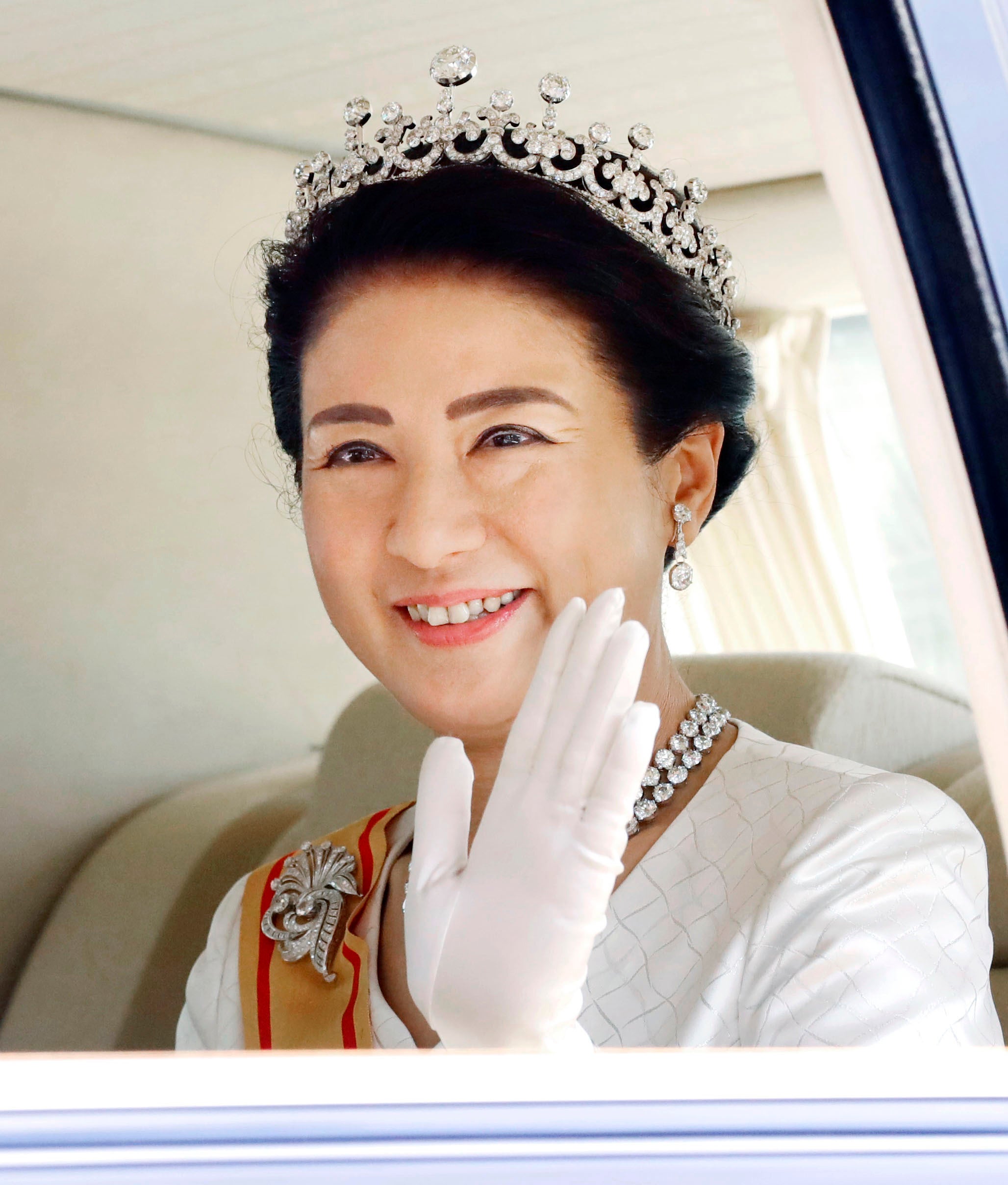 Japan’s new Empress Masako, in a car, waves as she leaves after attending the imperial ritual at the Imperial Palace, Wednesday, May 1, 2019 in Tokyo. Emperor Naruhito inherited Imperial regalia and seals as proof of his succession and pledged in his first public address Wednesday to follow his father’s example in devoting himself to peace and staying close to the people.(Kyodo News via AP)

His wife and daughter, Empress Masako and 17-year-old Princess Aiko, were barred from the ceremony, which only adult male royals — his brother, now Crown Prince Fumihito, and his uncle Prince Hitachi — were allowed to witness. Their guests included a female Cabinet minister, however, as the Imperial House Law has no provision on the gender of commoners in attendance.

The banning of female royals at the ceremony underscored the uncertain future of a paternalistic imperial family that now has just two heirs.

Nevertheless, Japan festively celebrated an imperial succession prompted by retirement rather than death. Many people stood outside the palace Tuesday to reminisce about Akihito’s era; others joined midnight events when the transition occurred, and more came to celebrate the beginning of Naruhito’s reign.

Dozens of couples lined up at government offices to submit marriage documents to mark the first day of Naruhito’s era, known as Reiwa, or “beautiful harmony.”

Natsumi Nishimura, a 27-year-old saleswoman, and Keigo Mori, a 32- year-old government worker, were at a Tokyo office on Wednesday, saying they decided to tie the knot at the start of a new era to mark their new life together.

“Opportunities like this don’t come by often so we thought it would be a day we won’t forget,” Nishimura said.

Prime Minister Shinzo Abe congratulated Naruhito on his ascension, pledging to create a “bright future” during the new era that is peaceful and full of hope.

Naruhito also received congratulations from abroad. President Donald Trump’s message said America and Japan will renew the bonds of friendship in the new era. Chinese President Xi Jinping was quoted by state media as saying China and Japan should work together to promote peace and development and bilateral ties.

From a car window on his way to and from the palace, Naruhito smiled and waved at people cheering on the sidewalk. He and his family will continue living at the crown prince’s Togu Palace until they switch places with his parents after refurbishments.

Naruhito, 59, is the nation’s 126th emperor, according to a palace count that historians say likely included mythical figures until around the 5th century.

The emperor under Japan’s Constitution is a symbol without political power. Wartime militarist governments worshipped the emperor as a living god until Naruhito’s grandfather renounced that status after Japan’s 1945 war defeat.

Akihito during his three-decade reign embraced an identity as peacemaker and often made reconciliatory missions and carefully scripted expressions of regret on the war. His immersion in that role leaves Naruhito largely free of the burden of the wartime legacy, allowing him to carve his own path.

Palace watchers said he might focus on global issues, including disaster prevention, water conservation and climate change, which could appeal to younger Japanese, while also emulating his father’s focus on peace.

That’s what many Japanese hope Naruhito will pursue.

“I hope the new emperor will be like the Heisei Emperor (Akihito), who cherishes peace,” said Takayori Kobayakawa, a 71-year-old retiree who came from Shizuoka, central Japan. “I have high hopes for him.”

Naruhito’s wife Empress Masako is a Harvard-educated former diplomat who may prove an adept partner in his overseas travels and activities. But much will depend on her health, since she has been recovering from what the palace describes as stress-induced depression for about 15 years. He recently said he hopes Masako might slowly expand her role.

Masako has largely limited her public appearances since late 2003, after giving birth to their only daughter, Princess Aiko, and facing pressure to produce a son. Naruhito criticized palace officials in 2004, though subtly, for denying Masako’s personality and career and pushing her into a corner.

“People saw a human side of a man defending his wife and I think people admired him a great deal for that,” said Jeff Kingston, Asian studies director at Temple University’s Japan Campus. Nauhito has also demonstrated that he is an independent thinker and cosmopolitan. “I think that we are going to see an interesting emperor, and I have high hopes for him.” /kga