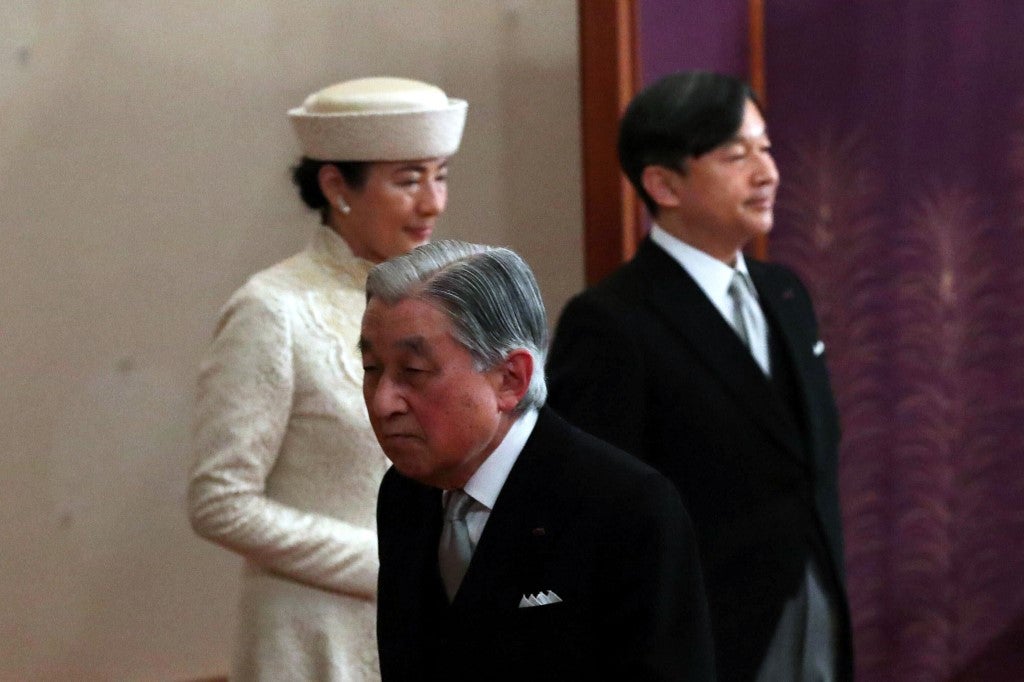 Japan’s Emperor Akihito (center) walks in front of Crown Prince Naruhito (right) and Crown Princess Masako as he leaves at the end of his abdication ceremony at the Matsu-no-Ma stateroom in the Imperial Palace in Tokyo on April 30, 2019. Akihito formally stepped down on April 30, the first abdication for 200 years in the world’s oldest monarchy, as his son Naruhito prepared to take the Chrysanthemum Throne and usher in a new imperial era. AFP

TOKYO, Japan – Japan’s new emperor Naruhito will on Wednesday formally take over the Chrysanthemum Throne following his father’s historic abdication from the world’s oldest monarchy that swept in a new imperial era.

The 59-year-old will be presented with the sacred imperial treasures of a sword and a jewel, as well as the seals of state, at a solemn ceremony in the Room of Pine in the Imperial Palace at exactly 10:30am (0130 GMT).

He officially became emperor at the stroke of midnight but will formalize this in the 10-minute ritual, which is off-limits to female royals — even his wife Masako.

Shortly afterwards, Naruhito will address the nation for the first time as its 126th emperor.

He will also make a public appearance on Saturday when he will again speak to the people of Japan.

But the pomp and ceremony will wait until October 22 when he parades through the streets of the capital to be congratulated by a host of world leaders and royals.

His first visit from a head of state will be from US President Donald Trump, who is scheduled to travel to Japan to meet the new emperor at the end of May.

The Oxford-educated Naruhito faces a delicate balancing act of continuing his father’s legacy of bringing the monarchy closer to the people while upholding the centuries-old traditions of the Chrysanthemum Throne.

Like his popular father Akihito, he has warned of the need to remember World War II “correctly,” without downplaying Japan’s early 20th-century militarism.

And he has spoken of the need to modernize the royalty, vowing especially to protect his wife Masako “at any cost” as she struggles with a stress-induced “adjustment disorder” from the pressure of life inside the palace.

In a statement released on her birthday in December, Masako pledged to do her best despite feeling “insecure” about becoming empress.

In the candid statement, she said she was recovering and could “perform more duties than before”, crediting the “powerful support” of the public.

As Naruhito ascends the throne, he will find a very different Japan than his father took over in 1989.

At the end of the 1980s, Japan ruled the world economically, its technology was the envy of every industrialized nation and its stock market at highs unlikely to be matched again.

At the height of the bubble, Japanese investors were snapping up paintings like Van Gogh’s “Sunflowers” and US landmarks including the Rockefeller Centre in Manhattan as “money was dripping off trees” — in the words of one former banker.

But after a “lost decade” when the bubble burst, Japan is still locked in a battle against deflation and sluggish growth while its population ages rapidly and many rural areas suffer from depopulation to the major cities.

Akihito’s abdication, the first in 200 years, ushered in a new imperial era known as “Reiwa” or “beautiful harmony” that will endure as long as Naruhito is on the throne.

Era names or “gengo” play an important role in Japanese society as many people recall life-defining events by when they fell during a certain era.

The change of era has also given rise to some fears of a Y2K-style software meltdown as computer systems struggle to adapt. /cbb