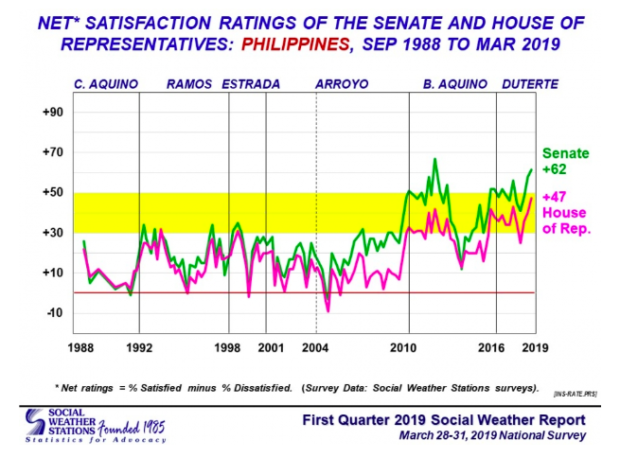 MANILA, Philippines — The Senate received a “very good” satisfaction rating while the House of Representatives was rated “good” in the first quarter of the year, a survey conducted by the Social Weather Stations (SWS) revealed.

Results of the survey released Tuesday showed that 72 percent of Filipinos were satisfied with the performance of the Senate and only 10 percent said they were dissatisfied.

This gave the upper chamber a net satisfaction rating of +62, which the survey considers “very good.”

Meanwhile, the House of Representatives received record-high net satisfaction rating of +47, after 61 percent of poll respondents said they were satisfied with the performance of the lower chamber and only 13 percent said otherwise.

The lower chamber’s net satisfaction rating also increased by 7 points from +40 in December 2018.

The Supreme Court’s performance also improved from “good” to “very good” from the previous survey. It hit a new record high of +50, which is a 13-point increase from +37 in December 2018.

The Cabinet’s performance, meanwhile, stayed “good” after receiving a net satisfaction rating of +44. But it was the Cabinet’s new record-high after beating its previous record of +38 in December 2017.