Surge in US measles cases leads to extraordinary measures

As an outbreak of measles surges across the United States — with 704 cases this year and counting — some local health officials are trying to deal with contagion in unvaccinated communities by turning to extraordinary police powers from the past. 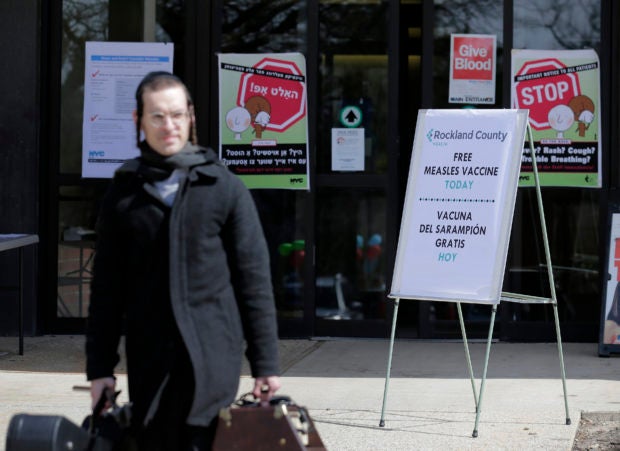 FILE – In this March 27, 2019 file photo, signs about measles and the measles vaccine are displayed at the Rockland County Health Department in Pomona, N.Y. Measles continues to spread in the United States, with more 704 cases reported so far this year spread among 22 states. U.S. health officials on Monday, April 29 updated the national tally, which already has eclipsed the total for any full year since 1994, when 963 cases were reported. (AP Photo/Seth Wenig, File)

“Unfortunately, we are revisiting diseases from another generation,” said Jason Schwartz, an assistant professor of health policy at the Yale School of Public Health.

“And now we are revisiting public health responses from another generation” in instances where vaccination programs have fallen short, he said.

Not long ago, measles was thought to be a problem that was mostly solved.

The once-common disease became increasingly rare after a vaccine became available in the 1960s.

In 2000, health officials declared the disease eliminated in the U.S., meaning that all new cases stemmed from infected travelers and not from homegrown transmission.

A decade ago, the cases numbered fewer than 100 a year. But they have been jumping since then, with the worst happening right now.

On Monday, U.S. health officials said the national tally already has eclipsed the total for any full year since 1994, when 963 cases were reported.

Twenty-two states have reported cases, but the vast majority have been in New York — mainly in New York City and in nearby Rockland County.

Most of the New York cases have been unvaccinated people in Orthodox Jewish communities.

Three-quarters of those who caught the extremely contagious disease are children or teenagers.

No deaths have been reported this year, but 66 patients were hospitalized.

The Centers for Disease Control and Prevention says this year’s count includes 44 people who caught the disease while traveling in another country.

Some of them triggered U.S. outbreaks, mostly among unvaccinated people. That includes the largest outbreaks in New York.

Measles in most people causes fever, a runny nose, cough and a rash all over the body.

A very small fraction of those infected can suffer complications such as pneumonia and a dangerous swelling of the brain. According to the CDC, for every 1,000 children who get measles, one or two will die from it.

The return of measles may be an early warning sign of a resurgences of other vaccine-preventable diseases such as rubella, chickenpox and bacterial meningitis, some experts say.

In recent decades, health officials have relied on doctors to prod families to vaccinate their children against measles and other diseases.

That push has been bolstered by requirements in every state that children be vaccinated to attend public schools.

But as vaccination rates have fallen in some communities and cases exploded, officials recently have taken more dramatic steps.

In New York City this month, officials ordered mandatory vaccinations in four Brooklyn ZIP codes, threatening possible fines of up to $1,000 for noncompliance.

The city also has shut down seven religious schools that failed to exclude unvaccinated children, though five were later allowed to reopen after submitting a corrective plan.

Last week in California, more than 1,000 students and staff at two Los Angeles universities were quarantined on campus or sent home after cases began to appear.

It was a limited order, and half already are out of quarantine, officials said Monday.

Dr. Umair Shah, the head of Houston’s county health department, said “we don’t know” if these kinds of measures will become more common.

Health officials have had such measures available and have been prepared to use them in case of unusual and even exotic outbreaks — like a new flu pandemic or Ebola — “but here we are implementing them for measles,” he said.

It’s been more than 25 years since those kinds of measures were taken against measles, Schwartz said.

The last similar instance occurred during a bad outbreak in Philadelphia in the early 1990s, when the city recorded more than 900 cases, most of them members of two fundamentalist church groups that did not accept vaccination or other kinds of modern medical care. /gsg