‘Unfortunate Makati incident can be an eye-opener for voters’ 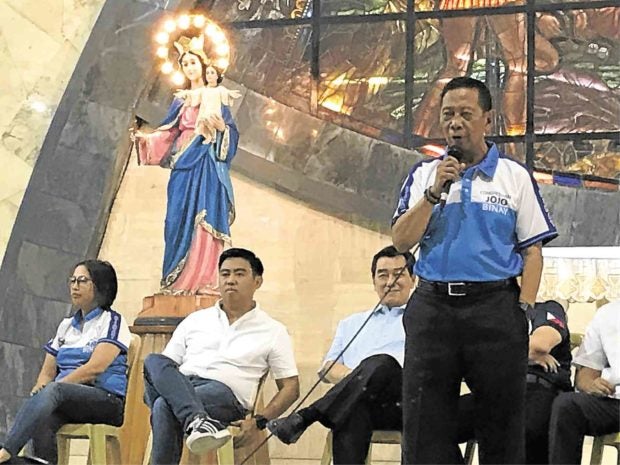 PACIFIER The Binay patriarch, former Vice President Jejomar Binay, tells reporters after the forum that he will try to iron things out between Abby and Junjun. —DEXTER CABALZA

MANILA, Philippines — The heated argument that transpired between Makati mayoral candidates Junjun Binay and his sister, incumbent Mayor Abby Binay, inside a church  could teach voters a lesson or two, according to the Parish Pastoral Council for Responsible Voting (PPCRV).

“The unfortunate Makati incident can be an eye-opener for voters, as well as candidates,” said Henrietta de Villa, cofounder and former chair of PPCRV, which organized the preelection forum held on Saturday at San Ildefonso Parish in Barangay Bangkal, Makati City.

“It can also serve as a learning experience for PPCRV organizers to tighten the program and have moderators who are prepared to control unexpected outbursts,” she told reporters on Monday.

According to De Villa, holding a candidates’ forum with the signing of a peace covenant has always been part of PPCRV’s voters education program.

“It’s not a debate… but an event where candidates get to answer prepared questions on current national and local issues,” she said.

In a radio interview, PPCRV vice chair Johnny Cardenas said that the Makati mayoral candidates were asked beforehand not to resort to tirades or scathing remarks out of respect for the church.

“Prior to the forum, candidates are briefed that they should avoid uttering foul remarks because our intention is for the faithful to get to know them better, know about their platforms and how they intend to fulfill their campaign promises,” he explained.

According to Cardenas, the Binay siblings should have focused on their platforms instead of getting into an argument.

During the election forum, Abby took issue with Junjun’s accusation that her husband, Makati 2nd district Rep. Luis Campos, was a drug addict. Without naming names, she called on the other candidates to stop attacking her.

Junjun, however, denied that he was referring to Campos and said that, despite his attempts to pacify Abby, she threatened to sue him for libel.

A heated argument broke out between the two who were pacified only when their father, former Vice President Jejomar Binay, stepped in and separated them.