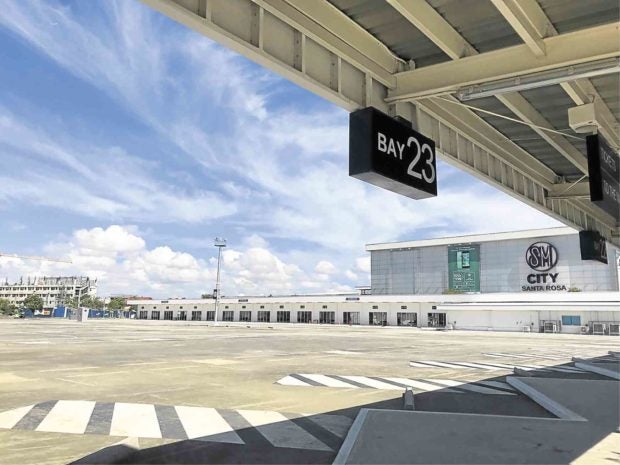 SLOW DAY The Santa Rosa Integrated Terminal in Laguna province is quiet as only a handful of buses stop here to drop off or pick up passengers while the MMDA is implementing the dry run of the ban on provincial buses on Edsa. —MARICAR CINCO

SANTA ROSA CITY, Philippines — The newly constructed Santa Rosa Integrated Terminal (SRIT) here has remained virtually empty since the dry run of the provincial bus ban on Edsa last week, with only a few buses stopping over the transport hub for southern Luzon.

But Mayor Danilo Fernandez said he was not worried about the situation as the local government did not want to rush commuters and bus drivers into getting used to the new route here.

The dry run of the bus ban started last week with the Metropolitan Manila Development Authority (MMDA) set to finally close provincial bus terminals on Edsa in May.

By then, about 5,000 buses from the provinces of Laguna, Quezon and Batangas and from Bicol region could travel only up to SRIT, where passengers would have to transfer onto city buses or take passenger vans to Metro Manila.

A Bulan, Sorsogon-bound passenger, who wanted to be identified only as Janice, was the lone passenger in the waiting area of SRIT when the Inquirer visited the terminal on Saturday.

“They said the bus already left Pasay (City in Metro Manila) at 7 a.m. Maybe it got stuck in traffic,” she said.

Janice, 36, did not mind waiting for an hour, though, saying it was more convenient for her than having to travel from this city to Pasay and therefore spending more for the fare.

When the bus arrived at 9:20 a.m., terminal employees assisted Janice into boarding the vehicle with her luggage in tow.

Another woman, who was trying to catch a ride to Cubao, Quezon City, said she preferred taking the van instead.

There is no restriction so far with vans using Edsa.

The Inquirer did not see any city bus at SRIT. Instead, van operators said they anticipated more commuters, preferring them over buses once the new Edsa policy was fully implemented.

“Only a few buses so far are stopping over [SRIT] and just for the dry run,” a bus operator said on Monday.

The operator, who asked not to be named to avoid drawing the ire of the MMDA, said buses avoided stopping over at SRIT during rush hour because their passengers would get angry, seeing the dry run as another cause of delay in their trip.

“We want to help [the national government] in decongesting Edsa. But we told them, we do it little by little. Paunti-unti lang ang pasok ng mga bus (We have to regulate the entry of buses),” Fernandez said on Monday.

In anticipation of the large volume of public utility vehicles entering Santa Rosa City, Fernandez said the city was working on widening roads along the bus routes connecting SRIT to the South Luzon Expressway (SLEx).

Nearby Biñan City, which has jurisdiction over Mamplasan exit (the closest SLEx exit to reach SRIT), is also proposing that buses enter only during certain hours of the day.

But the 1.5-hectare SRIT, built and managed by a shopping mall chain, is only an “interim” terminal in the south. It has several seats for passengers, toilets and a fully air-conditioned waiting area.

Fernandez said that should things turn out well, the city government and the Department of Transportation would push through with building a larger terminal, on a 10-ha land, beside SRIT.

He said the bigger terminal, eyed to become the largest in the Philippines, would be “interlinked” to the Philippine National Railways system, giving commuters another option to take the train instead.

Another plan, he said, is to construct a flyover near the Mamplasan exit in order to prevent traffic buildup in Laguna.