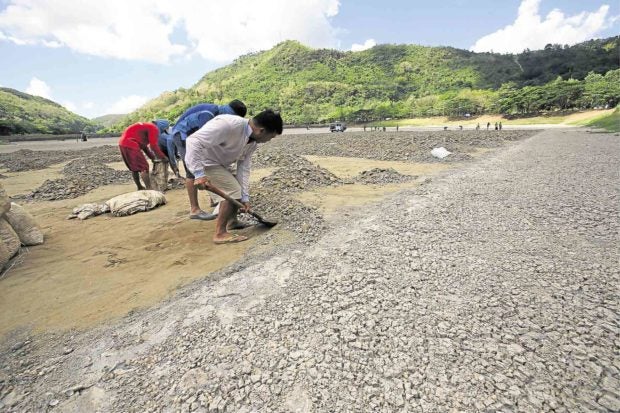 DROUGHT IMPACT Workers of the Metropolitan Cebu Water District scrape off dry mud at Jaclupan Dam in Talisay City as water level in the reservoir drops due to extreme heat and lack of rainfall. -JUNJIE MENDOZA

CEBU CITY — Residents in some areas in the cities of Talisay and Cebu City have only a two-hour window for their water supply daily after one of two major dams, where raw water is sourced, started drying up due to the drought.

Among those affected were 24,000 households from 40 villages in Cebu City and some hilly and remote areas in Talisay City, about 12 kilometers south of here.

“We appeal for understanding … We didn’t want this to happen. We can only do so much,” said Charmaine Rodriguez Kara, community relations and external affairs department manager of the Metropolitan Cebu Water District (MCWD).

Kara said that as of April 23, Jaclupan Dam at Barangay Jaclupan, Talisay, could supply only 9,000 cubic meters daily compared to its usual production of 33,000 cu. m per day.

She said there was also a possibility that some residents, especially those living in “elevated areas or interior locations,” would not get their supply for the day.

Kara said the MCWD had installed booster pumps to bring water from a new dam in Carmen town to Cebu City.

“We are also in talks with our bulk [water] supplier in [Barangay] Mambaling (Cebu City) to increase the supply,” Kara added.

She urged MCWD consumers to recycle and save water to keep up with the supply problem.

“We have deep wells or can do water rations, but these are not enough to accommodate the needs of the people. And so, it would be better to recycle water. For example, water used in washing dishes can also be utilized in flushing toilets and washing vehicles,” she said.

The water shortage, she said, is expected to last until the end of May or early June.

A 30-year historical data of the Philippine Atmospheric, Geophysical and Astronomical Services Administration (Pagasa) shows that Cebu has an average rainfall of 55.6 millimeters for April.

But this year’s rainfall volume for April registered only 23.1 mm.

“This trend will likely continue until August this year although there will be thunderstorms in June,” said Netherlen Saletrero, weather specialist of Pagasa based on Mactan Island.

She advised the public to conserve water to address the scarcity of water in some areas.

“We should be mindful in using our water because we would not know what will happen with our supply,” she said.