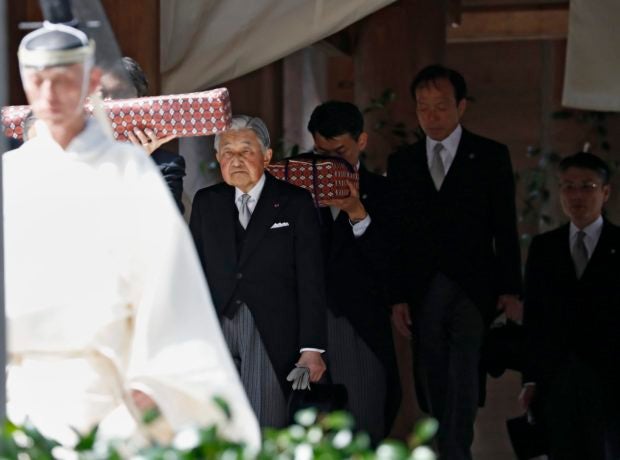 Japan’s Emperor Akihito (second from left) is led by a Shinto priest (left) as he leaves the main sanctuary of the inner shrine of Ise Jingu Shrine ahead of his April 30 abdication, in Ise in the central Japanese prefecture of Mie on April 18, 2019. – Akihito will step aside and make way for his son Crown Prince Naruhito on April 30. (Pool photo by ISSEI KATO via AFP

MANILA, Philippines — Malacañang is looking forward to a “golden age” in Philippine-Japan relations with the enthronement of incoming Emperor Naruhito.

“We hope to build the ‘golden age’ for Philippines-Japan strategic partnership during the reign of the new Emperor,” presidential spokesperson Salvador Panelo said in a statement.

Panelo echoed President Rodrigo Duterte’s statement that “Japan is our friend, closer even than a brother.”

The 83-year-old Emperor Akihito will officially retire on April 30, the first Japanese emperor to abdicate in 200 years.

“The Palace feels melancholic about the abdication of Japanese Emperor Akihito, who is considered a good friend of the Philippines,” Panelo said.

“We can only respect it and wish him well with whatever awaits him after he leaves the throne,” he added.

The Palace official said President Duterte was “humbled and pleased” during his visit to Japan in 2017 when he met Emperor Akihito and his wife Empress Michiko.

Emperor Akihito and Empress Michiko visited the Philippines in 2016 to commemorate the 60th anniversary of the normalization of Philippine-Japan diplomatic relations.

“We remain confident that the assumption of Crown Prince Naruhito would augur well for Philippines-Japan relations,” Panelo said.

“Japan’s US$9-billion investment and aid package for the Philippines, spread over five years, is the largest amount the Japanese government has committed for a single country,” he added.