Two years after terrorists’ siege, Marawi is still down and out 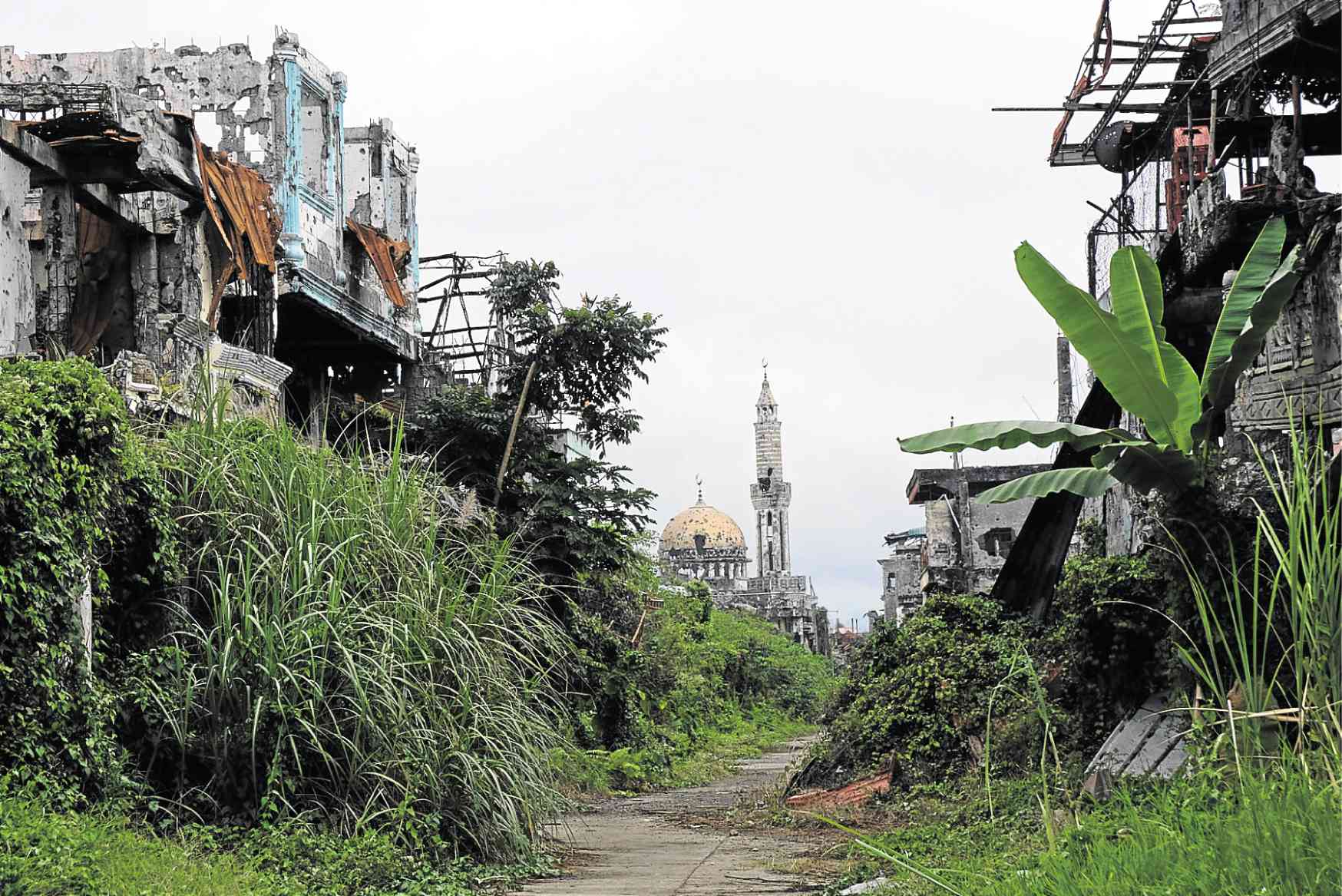 WASTELAND As Marawi’s reconstruction hangs in the air, this part of the city looks forlorn and abandoned, its bombed-out ruins overgrown, two years after Islamic State-inspired terrorists laid siege to it. —BONG SARMIENTO

MARAWI CITY, Philippines — At the foot of a slope at Barangay Bito Buadi Itowa here, the makeshift Marawi Bahay Pag-asa Pilot School stands as a contradiction in terms.

“Bahay Pag-asa” means house of hope, but hope is the last thing the dilapidated tents that serve as the school’s classrooms inspire.

The tents, divided by thin sheets of cloth that provide classes no protection from each other’s noise, are sometimes used as toilets so that feces greet the students the next day.

Just steps away are the rows of dirty white tents occupied by residents displaced by the 2017 battle for control of the Islamic city.

“It is very hot inside our tents, the heat is intolerable,” said Norphia Dipatuan, a mother of six seeking comfort outside a nearby tree-shaded tent.

Local civil society groups and traditional leaders blame the displaced residents’ prolonged agony in the evacuation centers on the government’s slow response and the failed negotiations with Chinese companies for the reconstruction of  Marawi.

The five-month siege of Marawi, launched on May 2017, by Maute gangsters and Abu Sayyaf bandits who had pledged allegiance to the Islamic State jihadi group in Iraq and Syria, uprooted at least 360,000 residents of the city.

But 70,000 people—as of March 2019—from 12,768 families, including the Dipatuans, continue to suffer in squalid evacuation centers, transitional shelters, or stay with relatives in other places.

It took Task Force Bangon Marawi, the group organized to handle the reconstruction, more than a year since the Oct. 17, 2017, liberation of Marawi, to break ground for the gargantuan job of rebuilding the main battle zone.

And almost 18 months after liberation, the area, with 24 villages and spanning 250 hectares, remains a sorry, horrific sight.

Return to the city set

The zone is restricted to an estimated 27,000 residents, including the “renters and sharers” of commercial and residential properties.

Eduardo del Rosario, the task force chair and the government’s housing czar, set the deadline for the clearing of debris and unexploded ordnance for Aug. 30.

After that, residents will allowed back into the area by phases.

Del Rosario’s task force had negotiated with two different consortiums led by Chinese state-owned companies for the reconstruction, applying the Swiss Challenge, a method where an unsolicited proposal for a public project is chosen and offered for matching by other proponents.

Drieza Lininding, chair of the civic organization Moro Consensus Group, blamed the government’s slow response and the negotiations with the Chinese companiess for the delay in the reconstruction work.

“Months after the liberation of Marawi, no groundbreaking happened because they (Del Rosario’s group) were busy talking with the Chinese-led consortium to rehabilitate the city through a joint venture agreement… It consumed a lot of time,” Lininding told the Inquirer.

But even if the two Chinese-led consortiums are now out of the equation, sentiment against China’s involvement in the reconstruction continue to pester.

China had responded to calls for help in rebuilding Marawi, donating heavy equipment worth P155 million that have been deployed in the construction of transitional shelters outside the main battle zone.

Beijing also committed a P1.1-billion grant during the pledging session for the Bangon Marawi Comprehensive Rehabilitation and Reconstruction Program in Davao City in November last year.

In June 2017, China also donated P370 million worth of firearms and ammunition to help Filipino troops fight the terrorists holding Marawi, aside from P15 million in relief assistance to displaced residents of the city.

But Lininding stressed that China had a “notorious reputation” in investing in other countries, referring to Sri Lanka, which was struggling to pay over $8 billion owed to state-owned Chinese companies.

In December 2017, Sri Lanka, unable to pay its debt to China, handed over the strategic Hambantota port to a Chinese company on a 99-year debt-for-equity settlement. The deal was valued at $1.1 billion.

“We are afraid, especially we have Lake Lanao as a resource. We don’t want to see Chinese companies taking control of (the lake) if we can’t repay the cost they will incur in rebuilding our city,” Lininding said.

Lake Lanao is the second largest lake in the Philippines and the largest in Mindanao. It is a major source of hydropower in the south.

China only wants to help

Laughing off the anti-Chinese sentiment in Marawi, Li Lin, head of China’s consulate in Davao City, said  Beijing wanted to help rebuild the city as part of its improving ties with Manila.

“The support from China to participate in postwar Marawi… is a gift from the Chinese government,” he told the Inquirer on April 2.

Despite the opposition from residents, Li noted the possibility of state-owned Chinese and private companies investing in Marawi.

He confirmed that China will donate a bridge in the main battle zone.

According to data from the Department of Finance, P72.20 billion ($1.39 billion) is needed for the reconstruction and rehabilitation of Marawi.

So far, the global community has contributed humanitarian assistance worth P6.9 billion ($130.64 million) for relief operations, the same data showed.