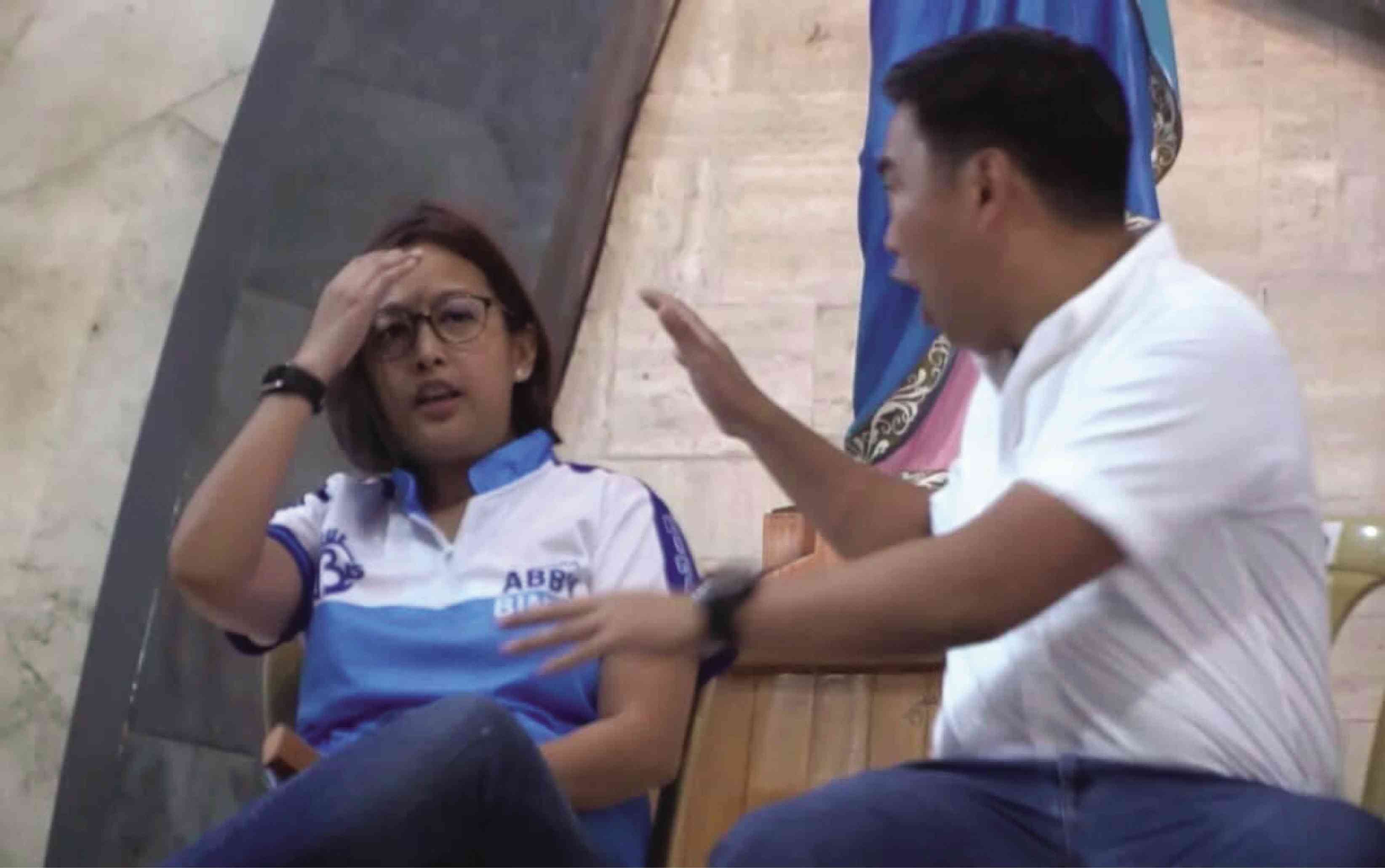 SIBLING RIVALRY Despite being seated together during an election forum held on Saturday, siblings Abby and Junjun Binay, who are both running for Makati mayor, ignored each other until they got into a heated argument. —PHOTOS BY DEXTER CABALZA

MANILA, Philippines — What should have been a formal and civilized debate among candidates for Makati City’s highest post on Saturday night turned into a sideshow when the leading contenders, incumbent Mayor Abby Binay and her brother, former Mayor Junjun Binay, had a very public spat.

Supporters of the Binay family initially hoped that having the siblings in the same event, and even seating them beside each other, would be the start of their reconciliation.

The two, however, gave each other the cold shoulder and had a heated exchange of words near the end of the forum held at San Ildefonso Parish in front of a bewildered audience and their father, former Vice President Jejomar Binay.

The crowd went wild when Abby delivered a scathing closing speech that seemed directed at her brother.

“I appeal to other candidates to stop spreading lies, stop besmirching my reputation. You will not win by attacking me,” she said.

When Abby went back to her seat, Junjun turned to her and the two started arguing vigorously as their supporters shouted either candidate’s name.

Police Col. Rogelio Simon, Makati police chief, and Jejomar Binay tried to break up the spat by standing between the siblings.

At one point, Junjun knelt (nanikluhod) in front of Abby, which her camp described as a “sarcastic” gesture on his part.

The drama ended when their father physically separated them. Abby joined him at the other end of the stage while Junjun sat beside his running mate, Monsour del Rosario.

When it was his turn to speak. Junjun told the crowd: “My sister was glaring at me. She said I was telling lies, ibang klase (she’s something else).”

He added: “O ayan, her true personality came out. She has no respect for anyone. I came here, full of respect for the church, but my sister is glaring at me.”

Both camps blamed the other for starting the word war, with Abby chiding Junjun for saying “hurtful things” to her while he insisted it was she who had “a violent and unreasonable response.”

“He was accusing my husband [Makati Rep. Luis Campos] of being a drug addict, and we are involved in the murder of his aide,” Abby said.

Junjun’s longtime aide, Monaliza Bernardo, was killed last month by unidentified gunmen outside her house in Barangay Olympia.  He had claimed her death was “politically motivated.”

During the forum, Junjun was asked by the organizer, the Parish Pastoral Council for Responsible Voting (PPCRV), what he could do to solve the city’s drug problem.

Without naming names, he said the Makati police and civilian bodyguards of a local official “should not be drinking [with] and escorting the No. 1 drug lord of Makati.”

“For some reason, [Abby] felt that I was alluding to her husband … and consequently, despite my attempts to pacify her, threatened to sue me for libel and repeatedly directed derogatory and disrespectful statements at my person,” Junjun explained in a separate statement.

Both he and Abby later apologized to Makati residents, as well as the church clergy and PPCRV officials present at the forum.

In a statement, Abby said she found it unfortunate that “my brother said hurtful things to me and acted in such a manner inside a church….”

“I pray he finds peace of mind and releases the anger that seems to have clouded his words and deeds,” she added.

Abby, however, said she would never get tired of talking about her performance as mayor and plans for the city.

The other mayoral candidates, on the other hand, used the opportunity to present themselves as alternatives to the warring Binays, whose family members had been at the helm of the city for the past three decades.

Wilfredo Talag, who claimed he was running under PDP-Laban, said that like President Duterte, he was against corruption and illegal drugs.

(Lawyer Alberto Wilfredo Oxales Jr., PDP-Laban national chair for legal affairs and arbitration, however, clarified Talag is not a candidate of their party. “We did not issue a certificate of nomination and acceptance in favor of Mr. Talag as a candidate for mayor in Makati City,” he said in a letter.)

Ricky Yabut, the son of former Makati Mayor Nemesio Yabut, told voters that they should choose him, claiming he could do all the Binays could not because “I am not a thief.”

Lawyer Renato Bondal said it was “unfortunate to see family members fighting because of politics” and told the crowd not to pit the siblings against each other.

Paloma Tulla, who has consistently voted for the Binays in previous elections, expressed hope that the siblings could mend their strained relationship after the polls.

“They belong to the same family and in the end, no matter what happens, they will still be the ones who will be together and console each other,” said the 29-year-old voter from Barangay La Paz.

“I hope that in the next eletion, they will be on one slate,” she added.