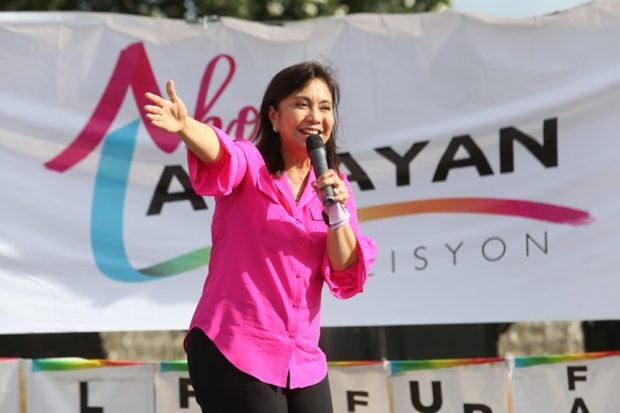 Vice President Leni Robredo speaks before the supporters during the launching of Ahon Laylayan Koalisyon – Cebu at the Plaza Independencia in downtown Cebu City on Sunday, April 28, 2019. With her were the Otso Diretso senatorial candidates. (Photo by JUNJIE MENDOZA, Inquirer Visayas )

CEBU CITY — The senatorial candidates of Otso Diretso, accompanied by Vice President Leni Robredo, visited Cebu on Sunday to court voters, encouraging them to select legislators who will represent the voice of the people.

Former Interior Secretary Mar Roxas expressed hopes that Cebuano would vote straight for Otso Diretso candidates in the May 13 elections.

“If the government truly defends the people, we can overcome poverty,” he said.

Sen. Bam Aquino, for his part, said winning in the elections might be an uphill climb for opposition candidates, but it remained a possibility.

“They said it would take a miracle for us to win. But no. You yourselves can make it happen,” he said.

Robredo and the candidates made their pitch at the launching of Ahon Laylayan Koalisyon in Cebu at the Plaza Independencia in downtown Cebu City.