Trump, US media in open war on annual dinner date 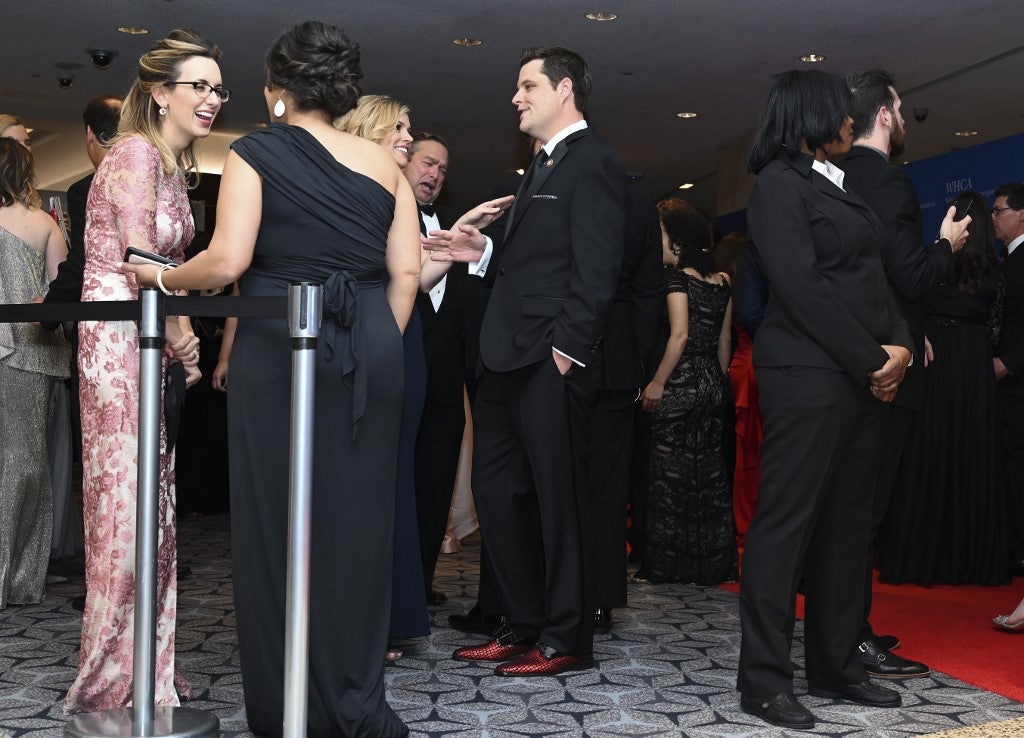 US Representative Matt Gaetz (C) (R-FL) speaks with guests near the red carpet during the White House Correspondents’ Dinner in Washington, DC on April 27, 2019. (Photo by ANDREW CABALLERO-REYNOLDS / AFP)

WASHINGTON — It’s meant to be the annual Washington love-in, a dinner where White House journalists and the president yuck it up in a hotel ballroom. But this Saturday, President Donald Trump stood up his dates.

Members of the White House Correspondents’ Association, or WHCA, were decked out in bow ties and gowns at the downtown Washington Hilton.

Trump, however, was 685 miles (1100 kilometers) away in Green Bay, Wisconsin, for a rally with his baseball cap-wearing supporters.

As usual, he devoted portions of his speech — like most of his speeches — to haranguing the “fake news media” or “enemy of the people.”

“They are fakers,” he said of the media to a typically boisterous crowd. “I’ll tell you, you know what sucks? their ratings suck because people don’t believe them”

Back in Washington, the WHCA’s president Olivier Knox told attendees he did not want to dwell on Trump — but called for a rejection of the president’s rhetoric.

“Fake news and enemies of the people are not punchlines, pet names or presidential. And we should reject politically expedient assaults on the men and women whose hard work makes it possible to hold the powerful to account,” he said.

Although there’s nothing obligatory about attending WHCA dinners, presidents have usually done so at some point during their time in office every year since the inaugural version in 1921.

Ronald Reagan was the last absentee in 1981 and he had a decent excuse: being recently shot in an assassination attempt.

Trump, however, has boycotted what he calls the “boring” and “negative” party for three years in a row — his entire presidency so far.

The gala used to be a glamorous affair where hundreds of journalists, Hollywood celebrities and the president were entertained by a top-drawer comedian or other talent.

Now the celebs have drained away and this year even the comedian was missing. A presidential historian, Ron Chernow, was set to deliver the main speech instead.

It’s the latest shot in what the president sees as his war against a media machine refusing to give him fair coverage.

Trump’s main weapon is Twitter, which he uses daily to reach some 60 million followers. Millions more follow him on other platforms.

The other main way of bypassing potentially critical outlets is his extraordinary relationship with Fox News, the Rupert Murdoch owned network which has been criticized for coming to resemble state television.

Even if many of the news journalists maintain their independence, some of the most prominent anchors and hosts show nothing but loyalty to Trump. They’re rewarded with exclusive access to administration officials and to the president himself.

Meanwhile, other outlets are mostly kept at arm’s length.

The press briefing room in the White House, which used to see nearly daily Q&A sessions under previous presidents, has been all but abandoned.

Trump is unusually accessible, but mostly through often chaotic, informal gatherings, while Saturday marks the 48th day since Sanders held a full briefing.

When they’re not being ignored, White House journalists can expect to hear abuse. Trump’s rallies invariably include segments where he encourages the crowd to boo the reporters covering the event.

For years, WHCA dinners were a chance to let the hair down in a notoriously serious town. Past performers include Bob Hope, Frank Sinatra and Barbra Streisand.

Since the 1980s, comedians have provided entertainment, making gentle and not-so-gentle fun, or “roasting,” the centerpiece of the dinner.

Presidents were expected to give back as good as they got. A standout moment was Obama’s riff in 2011, when one of his comic targets in the VIP-packed audience was none other than Donald Trump.

Last year, though, the jokes fell flat with organizers.

Featured comedian Michelle Wolf tore into Sanders and caused as much offense as laughter. Even the WHCA thought it had gone too far, calling her routine “not in the spirit” of the occasion.