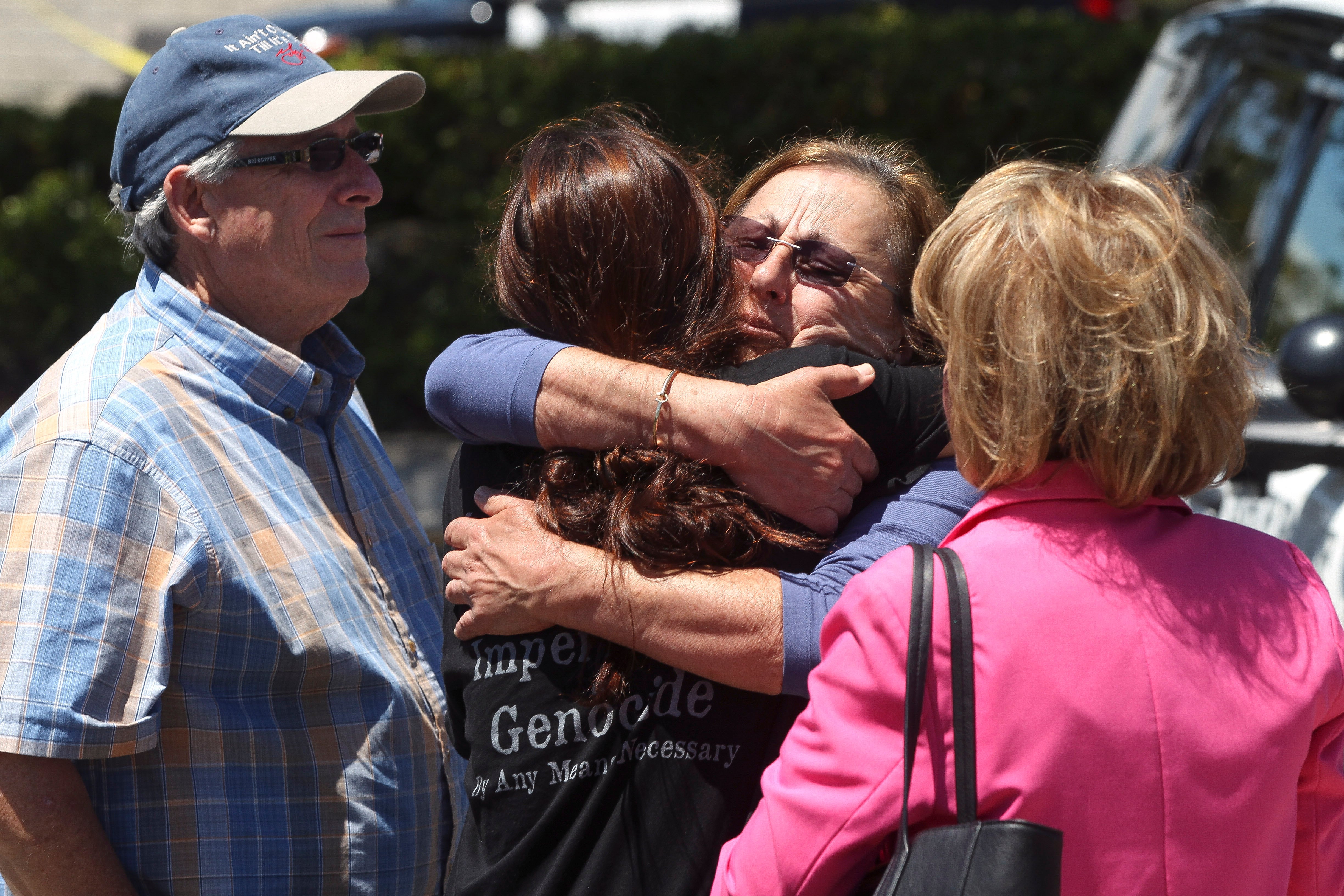 Members of the Chabad synagogue hug as they gather near the Altman Family Chabad Community Center, Saturday, April 27, 2019, in Poway, California. A shooting at the synagogue outside San Diego where worshippers were celebrating the last day of Passover sent multiple people to the hospital Saturday, but the extent of their injuries was not clear, officials said. AP

The man, whose name was not released, fled in a car and called 911 shortly afterward to say he was involved in the shooting at Chabad of Poway, San Diego Police Chief David Nisleit told reporters.

When an officer reached the man on a roadway, “the suspect pulled over, jumped out of his car with his hands up and was immediately taken into custody,” Nisleit said.

The officer found an AR-type rifle in the front passenger seat.

San Diego County Sheriff William Gore said at a news conference that he had no details on motive. Authorities say they were reviewing copies of his social media posts. Synagogue members walk outside of the Chabad of Poway Synagogue Saturday, April 27, 2019, in Poway, Calif. Several people were injured in a shooting at the synagogue. (AP Photo/Denis Poroy)

There was no known threat after the man was detained, but authorities boosted patrols at places of worship as a precaution, Nisleit said.

The shooting came exactly six months since a shooting at a Pittsburgh synagogue killed 11 people in the deadliest attack on Jews in U.S. history.

An off-duty Border Patrol agent inside the synagogue in the city of Poway, just over 20 miles (32 kilometers) north of San Diego, opened fire as the shooter fled but didn’t hit him, Gore said.

Minoo Anvari told CNN that she’s a member of Chabad of Poway and her husband was inside during the shooting. She said he called to tell her the shooter was shouting and cursing and she called the shooting “unbelievable” in a peaceful and tight-knit community.

“We are strong, we are united, they can’t break us,” she said.

Passover began on April 19 and was ending Saturday.

In Pittsburgh, a truck driver who authorities say expressed hatred of Jews has been charged in the Oct. 27 rampage at the Tree of Life synagogue. He’s pleaded not guilty. /cbb