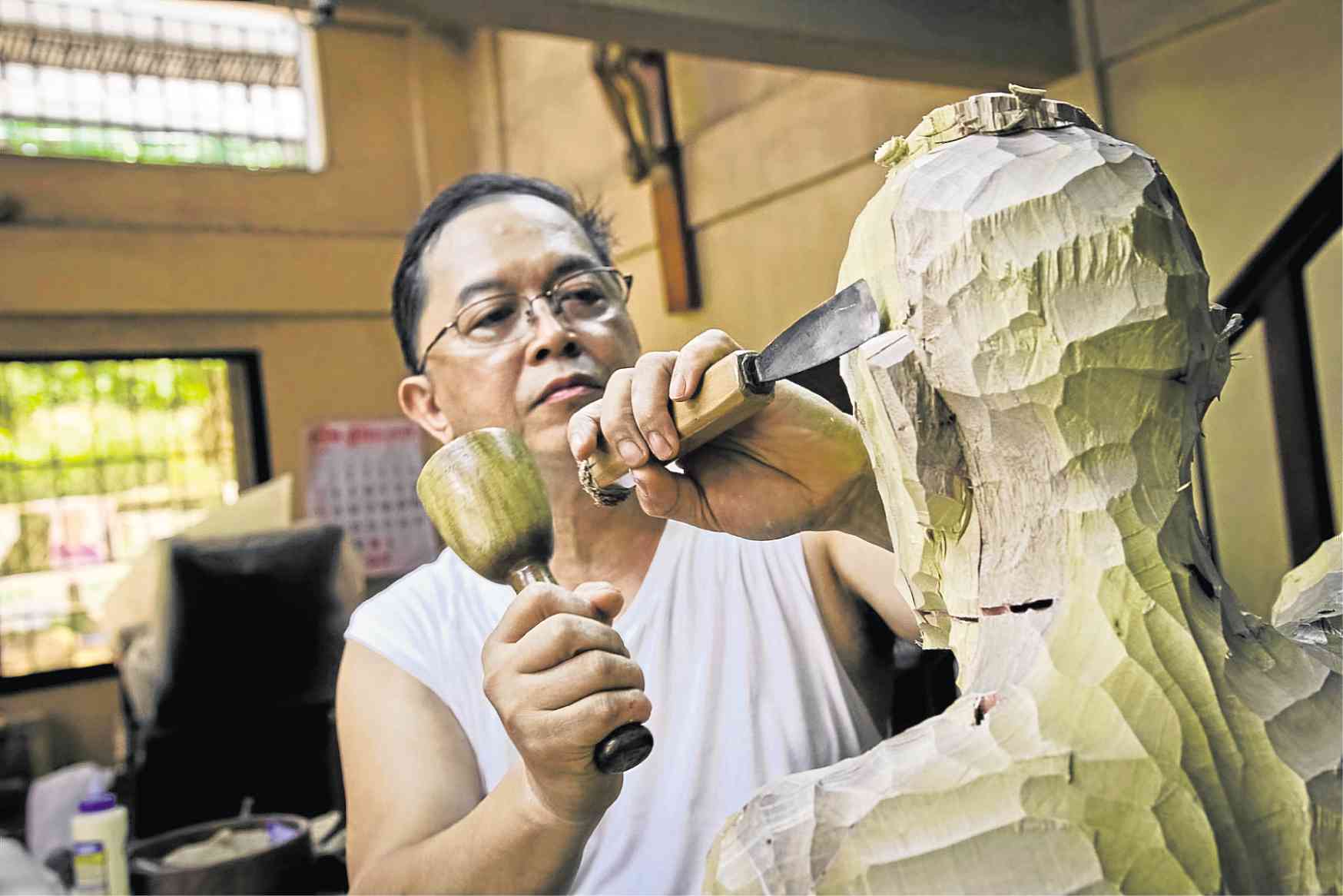 MASTER AT WORK Justino “Paloy” Cagayat Jr., one of the master carvers of Paete town in Laguna province, is among the keepers of the traditional art of wood carving that has been supporting families of artisans in his hometown. —PHOTOS BY CHRIS QUINTANA/CONTRIBUTOR

PAETE, Laguna, Philippines — From the street, the house of master woodcarver Justino “Paloy” Cagayat Jr. is unremarkable, hidden by steel gates and high concrete walls. The confines, however, are no restrictions to creativity, which flows freely in the main room of the two-story structure.

Craftsmen are busy chipping wood to produce artworks along spots leading to Cagayat’s workplace. At the center of what could have been the living room is Cagayat’s station where his sculptures, both finished and forthcoming, are displayed, chisels and mallets of varying shapes and sizes laid out on a table within reach, and supplies, like glue and other adhesives, pencils and a lamp spread on another table.

Wooden statues and crucifixes, big and small, which are found in almost every Catholic church and home in the country, were usually made in Paete, a town that has become famous for its centuries-old wood carving tradition passed on through generations.

Paete, a fourth-class municipality (population: 25,096 as of 2015) in Laguna province, was proclaimed the Carving Capital of the Philippines in 2005. It derived its name from the Tagalog word “paet,” or chisel.

Wood workshops are still a regular sight, especially in the downtown area, and the smaller ones are set up in the artisans’ homes. Shops selling wooden religious icons and other carved items also abound. 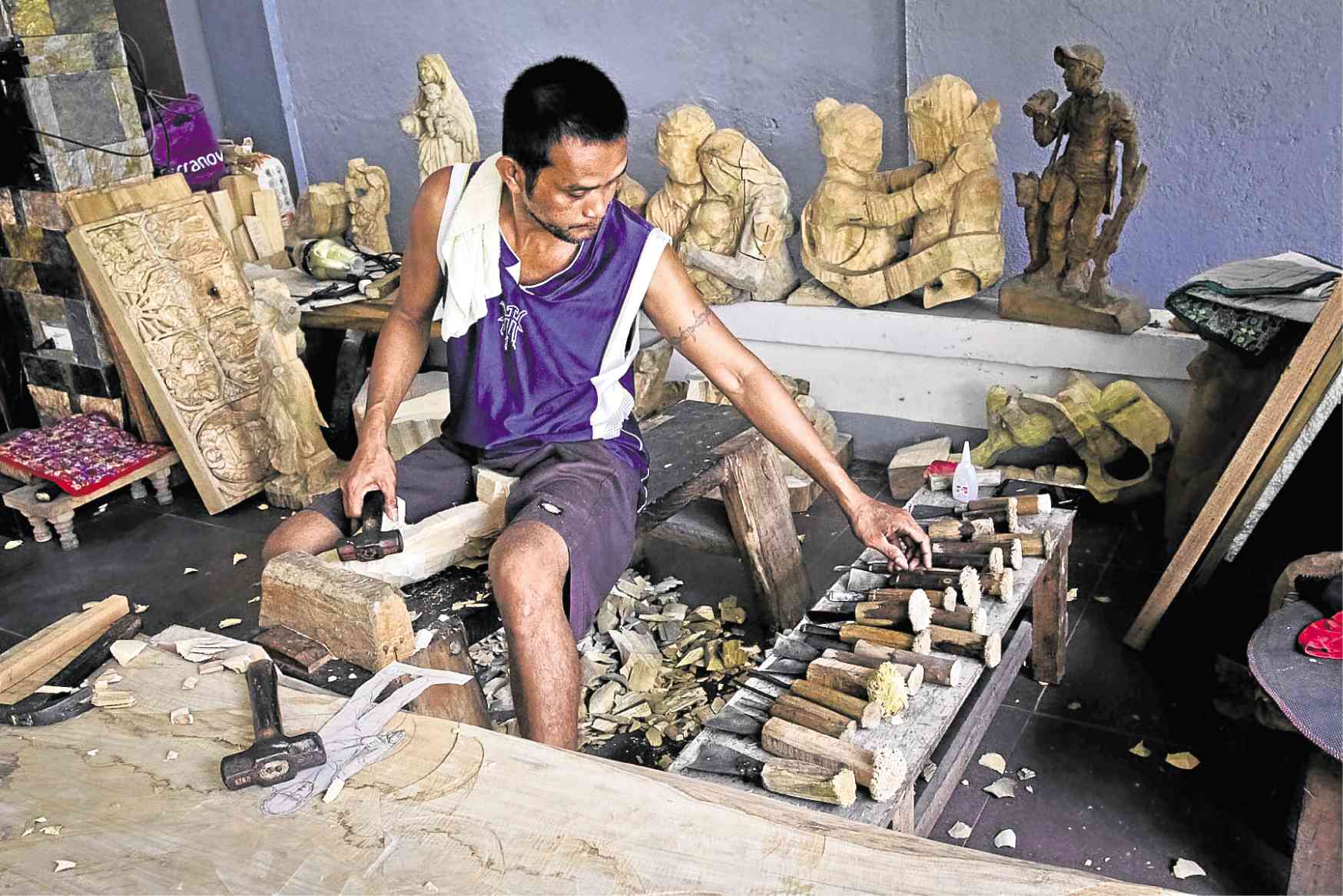 SKILLS The skillful hands of apprentices and self-taught workers in modest workshops in Paete produce intricate pieces of sculpture.

The local government does not keep an official registry of woodcarvers, but its municipal agriculture officer, Antonio dela Rosa, says that between 3,000 and 5,000 were engaged in wood carving during the industry’s heydays from the 1970s to the 1980s.

The number, Dela Rosa says, has significantly gone down to 900, including Cagayat, 58, and Luisito Ac-ac, 67, an apprentice of National Artist for Sculpture Napoleon Abueva and 2009 nominee for the country’s most prestigious recognition in the field.

“The sad thing is the younger generations are not being taught [to carve] anymore. When we were in elementary [school], we had a subject that taught us how to carve,” Cagayat recalls.

His son, Franco, is following in his footsteps but carves mostly model cars. So does a nephew, Nestor, whose family’s workshop is just a few meters away from his uncle’s.

Diversification is also a challenge. Those who originally started as woodcarvers now work abroad in cruise ships and hotels and are into carving ice blocks, fruits and vegetables. 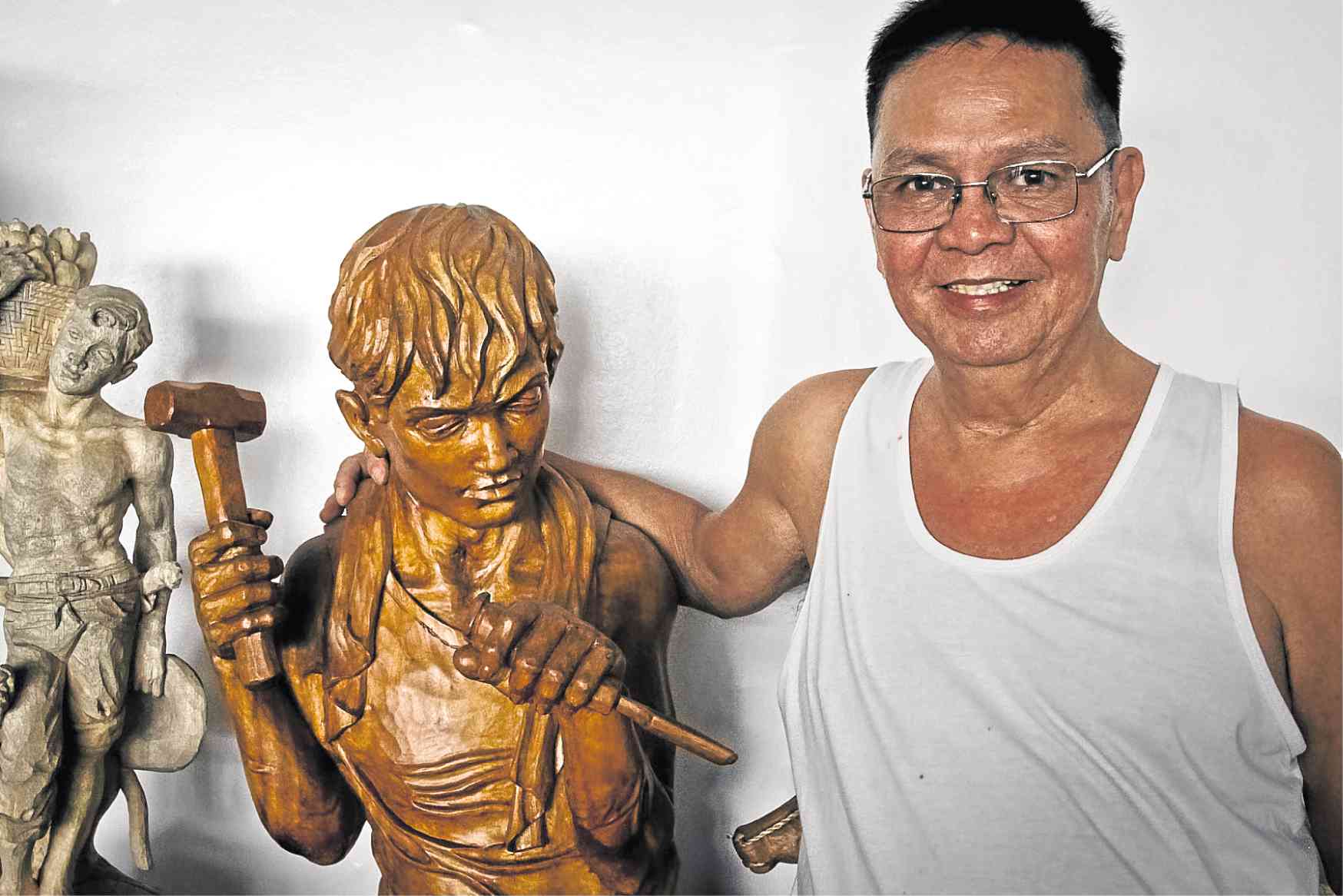 “My other friends and relatives went to ice [carving]. I was left. There are only a few of us left who carve saints,” Cagayat says.

“When it comes to dollars, you can’t compete with that. They want to earn in dollars,” he adds.

Teaching wood carving is no easy feat and apprentices also must possess certain skills, according to Ac-ac.

“I had an apprentice who’s been with me for years, but his work was still the same. The first step is you need to be good at drawing,” said Ac-ac, who was an illustrator first before he went into wood carving.

If the age-old craft is to flourish again, some hurdles need to be overcome.

Wood carving is being introduced into the senior high school curriculum, Cagayat says.

“There are a few students who have been carving with me for a month now. They were divided into the shops here in Paete and are being taught. Maybe, they will be interested,” he says.

“If, in a batch, there will be one or two [who will become interested], that’s good that there will be someone who will learn and continue what we do.” 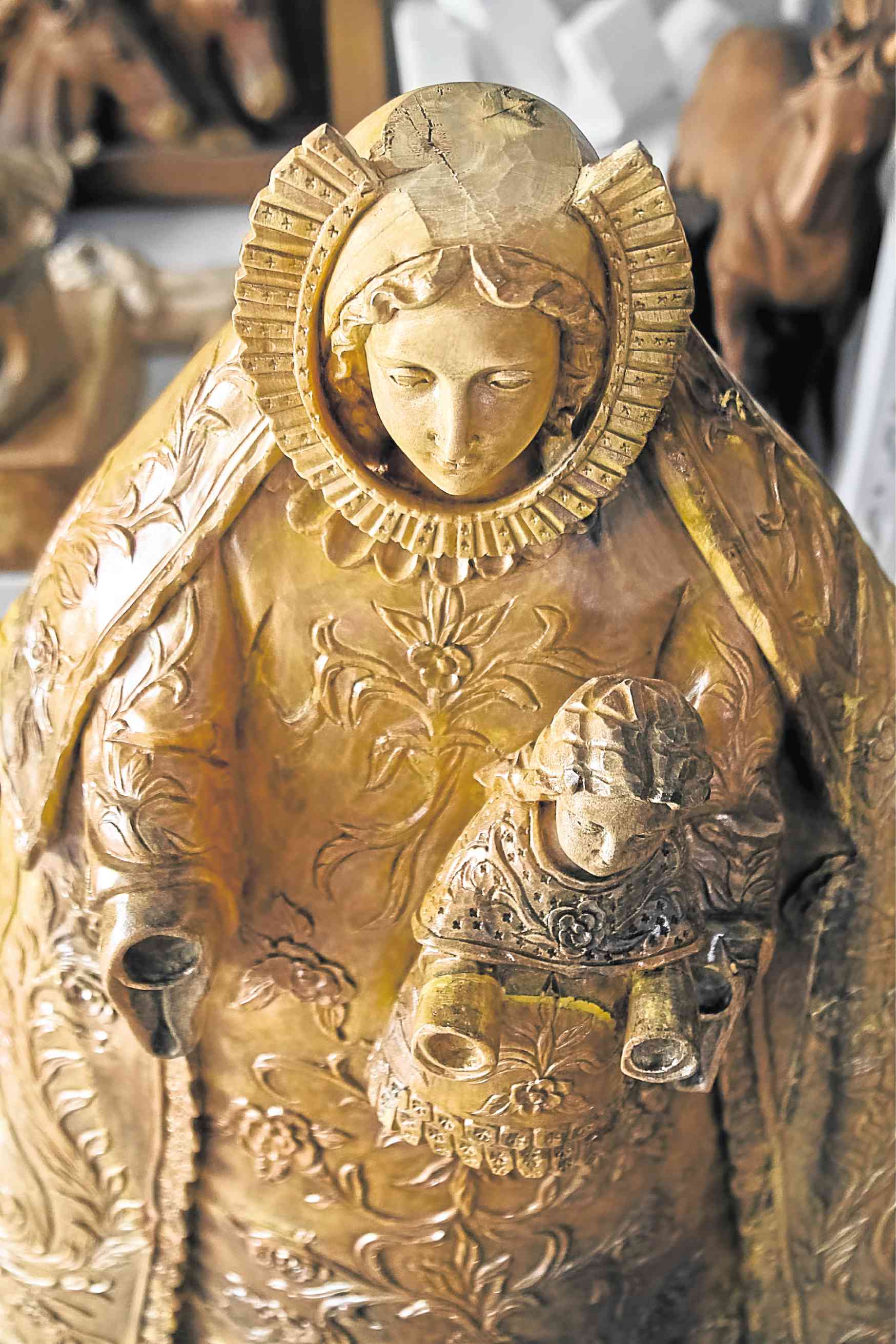 But the biggest challenge for the craftsmen is the scarce supply of wood.

The Cagayats say the log ban implemented in 2011 had an impact on supply. Under Executive Order No. 23, harvesting trees that grow naturally in forests (not planted by humans) is prohibited.

Though Paete was declared the Carving Capital, Cagayat says “we were not given special permit to harvest wood. It should go hand in hand.”

Among woodcarvers, the true star material is the “batikuling” (Litsea leytensis Merr.), a tree found mostly in Quezon province and some parts of Laguna, which has distinct properties.

“Batikuling has a certain smell that repels termites. That’s what’s good about it,” Cagayat said.

“What’s also good about it is that it’s soft and light,” said his nephew, Nestor, 35.

The family of carvers works on other wood sources, such as “santol,” mango, acacia and narra.

Cagayat used to have wood stock good for a year or two, but now, it would last only for a few months. He started planting batikuling five years ago so he would have a steady supply.

In 2013, the municipal government, in collaboration with Southern Luzon State University in Quezon, also started planting the tree species. It now maintains 15 hectares of batikuling trees, which will be ready for harvest in 15 to 20 years.

Paete’s wood carving industry is not exactly dying as some may think. There is still a steady demand for these wooden items because, as Cagayat observes, the number of Catholics is increasing.

Priests are the most common customers. Some foreigners and private individuals at home and abroad buy wooden religious statues for their home altars or for religious processions.

Because of the time spent carving these intricate statues, they fetch hefty prices, and they go even higher the larger they are. For Ac-ac, it takes him about a month to finish a 5-foot (1.52-meter) statue.

The woodcarvers are often busy months before Holy Week and Christmas, as orders start to pour in. June and July are usually lean months.

To keep locals and tourists interested in wood carving, Ac-ac established Museo Ac-ac in 2017 to feature his works.

Read Next
THIS WEEK’S FESTIVALS: April 28 – May 4, 2019
EDITORS' PICK
Water remains our saving grace right now
Been there, done that but what’s the difference between MECQ and GCQ?
Smart 5G goes live
PNP: Checkpoints back in MECQ areas
A gem of a residence in the new normal
BREAKING: 3,226 latest COVID-19 cases bring PH’s total to 106,330
MOST READ
MECQ guidelines in infographics
Lacson takes up cudgels for health workers ‘threatened’ by Duterte
You’re my ‘idol’ in crafting laws, neophyte senator ‘Bato’ tells Drilon
Citing Duterte order, Lorenzana says PH won’t join other navies in South China Sea drills
Don't miss out on the latest news and information.