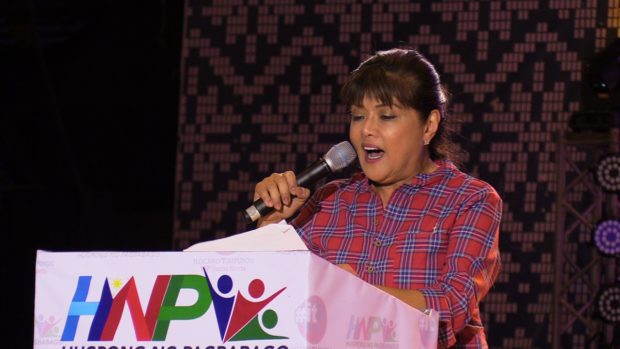 In a statement, Marcos said the IRR for the law excluded farmers from the Program Steering Committee (PSC), which is tasked with implementing projects funded by the Rice Competitiveness Enhancement Fund (RCEF).

Marcos said the exclusion of farmers from the panel was “extremely unfair and unwise” considering that that farmers were the ones in the right position to have a say on the matter.

[The RCEF was set up to help farmers. So they should a voice and representation in the Program Steering Committee of the RCEF to ensure that RCEF-funded projects will give the aid that farmers need.]

“It is extremely unfair and unwise to deny our farmers’ representation in the PSC when they are in the best position to provide information to ensure proper implementation of RCEF funded projects. The IRR should be amended immediately to give our farmers a voice in the PSC, ” Marcos added.

According to Marcos, the livelihood of the farmers will be affected if the problem on the Rice Import Liberalization Law would not be fixed.

Under the signed IRR, only the heads of government agencies — such as the Department of Agriculture, National Food Authority, National Irrigation Administration and National Economic and Development Authority — are included in the list of members of the PSC.

Earlier, the Federation of Free Farmers, the Philippine Council for Agriculture and Fisheries and the Samahang Industriya ng Agrikultura have earlier expressed their strong disappointment over the IRR.

The law, which lifts restrictions on the entry of imported rice into the country, allots an initial budget of P10 billion for the RCEF.

The RCEF is where the tariff collected from all imported rice under the liberalized rice import regime would go.

It would also be used to provide needed assistance to farmers so as to lower the cost of rice production and make the country competitive with other rice-producing countries such as Vietnam and Thailand.