Xi asks for ‘fair and friendly’ treatment for Chinese 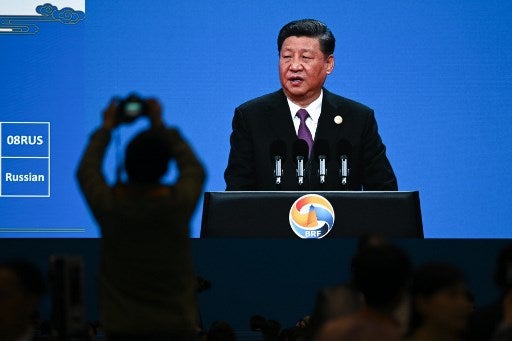 A large video screen shows Chinese President Xi Jinping speaking during the opening ceremony of the Belt and Road Forum at a media center in Beijing on April 26, 2019. AFP

BEIJING, China — China’s President Xi Jinping on Friday called for a “fair and friendly” environment for Chinese companies and citizens overseas, as pushback against its tech giants rises and academics find their visas canceled.

Beijing and Washington have been locked in a bruising trade war — which negotiators have been working to resolve — but there has also been a growing strategic rivalry between the world’s two largest economies.

“China’s measures to expand opening up are independent choices,” Xi told a gathering of 37 world leaders at a summit for his signature Belt and Road Initiative.

“We also hope that all countries in the world will create a good investment environment, treat Chinese enterprises, international students and scholars equally, and provide a fair and friendly environment,” he said.

An increasing number of Western countries have moved to block Huawei and its state-backed competitor ZTE from building next-generation 5G networks over fears Beijing could spy on communications and gain access to critical infrastructure.

The United States has also started to bar some Chinese academics from the country if they are suspected of having links to Chinese intelligence agencies, the New York Times reported.

It added that thirty Chinese scholars have had their visas canceled or put under review in the past year.

In accounts published in the state-run Global Times, several Chinese academics said their 10-year visas to the US were canceled, with officials citing concerns over their links to Chinese intelligence.

“Some Chinese were deliberately targeted when visiting the US and had their baggage searched, but cases of canceling visas are not common,” wrote Jin Canrong, dean of international studies at the elite Renmin University.

Such instances were rare even during the Cold War, he added.

Beijing has apparently hit back in retaliation: China expert Michael Pillsbury, who advises US President Donald Trump on China, said his visa to enter the country for a forum earlier this year was blocked.

Tensions flared between Washington and Beijing last December over the arrest of Huawei executive Meng Wanzhou, who is wanted in the US for violating Iranian sanctions.

She was arrested in Canada on request of the US and is now fighting extradition.  /ee