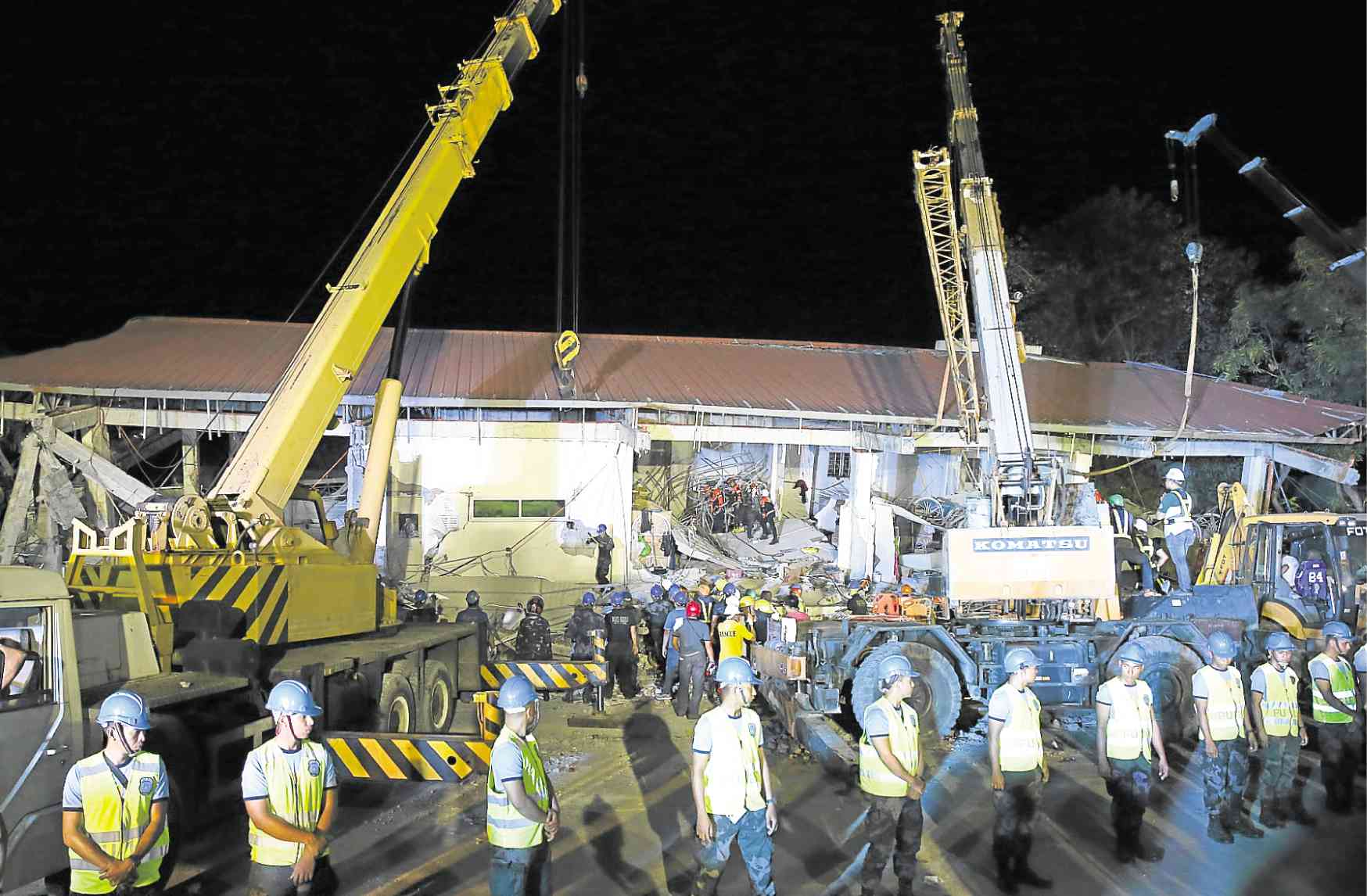 NONSTOP RESCUE WORK Policemen guard on Tuesday the vicinity of Chuzon Supermarket, which collapsed in an earthquake the previous day, as rescuers continue their search for survivors. —AP

The Philippine National Police is considering bringing charges against the owner of a supermarket in Porac, Pampanga province, that crashed down in Monday’s 6.1-magnitude earthquake, trapping dozens of people.

Police Gen. Oscar Albayalde, the PNP chief, told reporters on Thursday that charges may also be brought against local officials who issued permits and clearances for the construction of Chuzon Supermarket as well as the building contractor, who might have used substandard materials.

Investigators are talking to complainants, mostly people injured and families of those who died when the building collapsed as the earthquake shook Pampanga and surrounding provinces on Monday afternoon.

“All of the complainants’ statements are being taken by the CIDG (Criminal Investigation and Detection Group) and we are preparing to file a case as soon as all the statements have been gathered,” Albayalde said.

Chuzon Supermarket owner Samuel Chu appeared at a police station in Porac on Tuesday at the start of an investigation on suspicion the building’s construction may have breached regulations.

“A sworn statement was taken from him and then he was made to submit pertinent documents,” Albayalde said.

The police chief said Chu had liability in the disaster.

“Whether complainants file criminal cases or not, there is civil liability,” Albayalde said.

“What happened there is reckless imprudence. It’s because probably the building was substandard,” he said.

“Of course, there are local officials who are bound to be held liable also over how the supermarket owner obtained a (building) permit and if there were building code violations,” Albayalde said.

The building contractor may also be charged if investigators find that substandard materials were used in the construction of the supermarket, he added.

“Our investigators are waiting for the findings of the DPWH (Department of Public Works and Highways),” Albayalde said.

Why did the building fall?

The DPWH is trying to determine why the four-story building that housed Chuzon Supermarket failed to stand in the earthquake.

Investigators are looking into reports that the building was originally designed to have only two stories.

More than 90 employees of the supermarket and an undetermined number of shoppers were trapped when the building collapsed.

Fourteen people have been confirmed dead in the earthquake—not 17 as reported on Wednesday—12 of them in the supermarket crash.

Marlou Salazar, Central Luzon civil defense chief, said on Thursday that all 92 employees of Chuzon had been accounted for, two of them confirmed to have been killed in the disaster.

She said rescuers were looking for seven missing people believed to be shoppers.

Five bodies had so far been recovered from the rubble, two of them employees of the supermarket—Mary Ann Sales, 25, of Paniqui town in Tarlac, and Florita Matannu, 26, of Burgos, Pangasinan.

The others were shopper Marilyn de la Cruz and her two children, Hailee and Jacob.

The earthquake destroyed 111 houses and damaged 332 others, mostly in Floridablanca town, Pampanga.