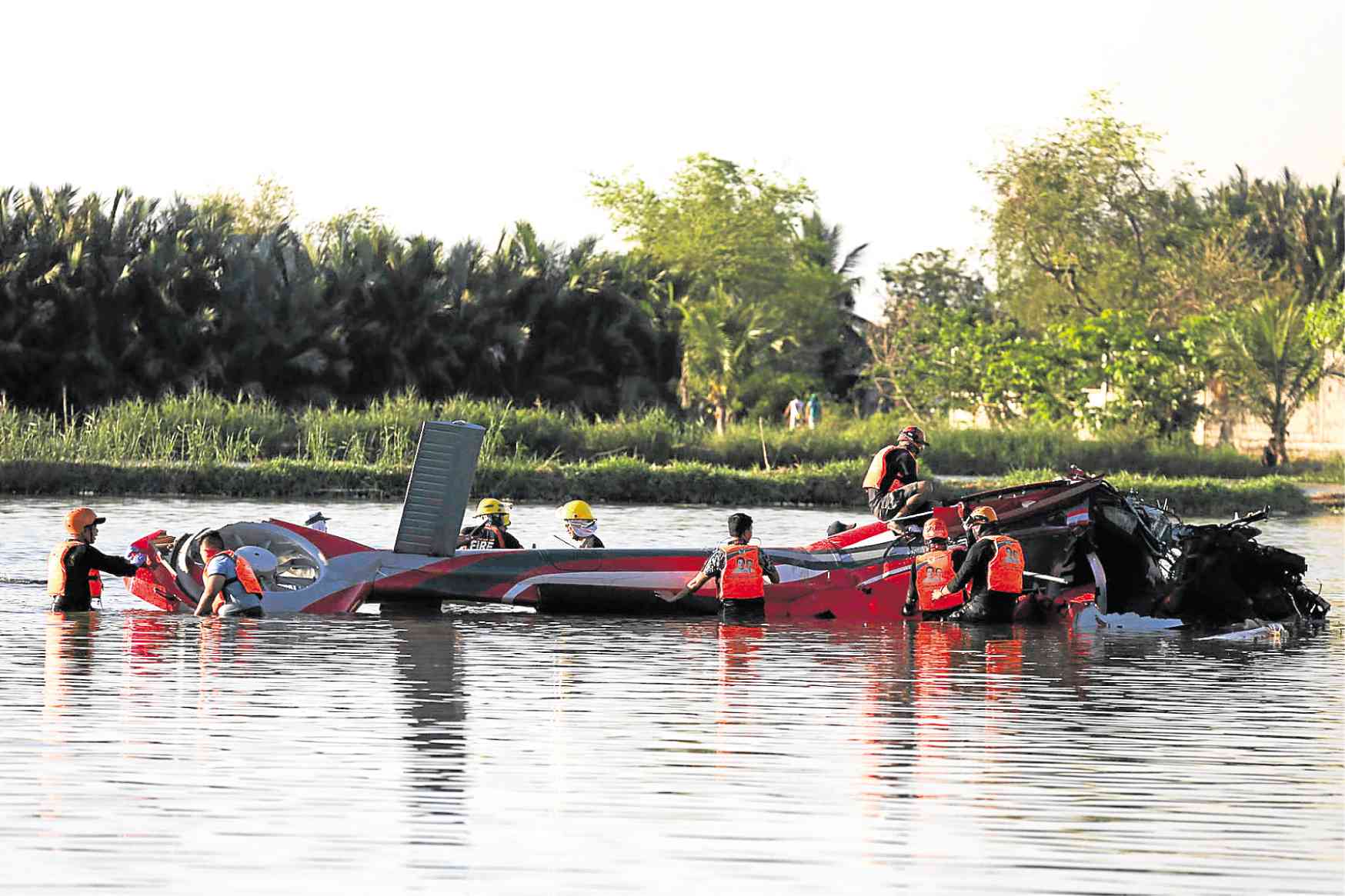 CRASH SITE The wreckage of the helicopter, which crashed on Thursday and killed Liberato Laus, his driver-bodyguard and its pilot, lies on its side half-submerged in the murky water of a fishpond in Barangay Anilao, City of Malolos, Bulacan province. —RICHARD A. REYES

CITY OF MALOLOS — Pampanga billionaire and business visionary Liberato “Levy” Laus, founder and chair of the LausGroup of Companies, died in a helicopter crash on Thursday, police said. He was 68.

Laus and the helicopter pilot, Capt. Ever Coronel, were pronounced dead on arrival at Bulacan Medical Center, 2 kilometers from a fishpond at Barangay Anilao where the red Eurocopter H130 T2 had plunged.

The businessman’s  driver and bodyguard, Wilfran Esteban, died later in the same hospital.

Laus, chair emeritus of the Pampanga Chamber of Commerce and Industry, was flying home to City of San Fernando, Pampanga province, from Manila when the chopper, with body marking RPC 8098, went down around 12:30 p.m.

Col. Emerey Abating, Malolos police chief, said a part of one of the helicopter’s rotor blades broke off before the aircraft crashed.

The helicopter was found lying on its side, half-submerged in the murky water and its nose crushed.

The Civil Aviation Authority of the Philippines will open an investigation.

“His death is a big loss not only to the family but especially to his beloved Pampanga and Central Luzon,” said his friend Marni Castro.

One of the proponents of countryside development, Laus took that advocacy to heart since Corazon Aquino rose to the presidency in 1986 by investing in northern and Central Luzon.

An alumnus of Don Bosco Academy in Bacolor, Pampanga, Laus traveled all the way to Turin, Italy, in 2016 to convince the Salesian fathers to reopen the Bacolor campus, which was buried by Mt. Pinatubo’s lahar in 1995.

A civic leader, Laus was one of the organizers of the Save San Fernando Movement that pressed for the construction of the FVR Megadike lahar catchment amid talk of relocating the Kapampangans to Palawan province.

In 1978, despite a rising career in the banking industry, Laus left his job as a bank manager to put up a small automotive dealership—with meager capital and just three cars on display.

Today, his LausGroup of Companies is a diversified conglomerate of automotive dealerships. It is now considered the largest multibrand dealership network in the Philippines, according to the company’s website.

His CarWorld showroom in San Fernando was once used as a meeting place and stock room for Pinatubo-related works.

Under his leadership, the Pampanga Chamber of Commerce and Industry promoted countryside development, believing that this was one of the best ways to spread development evenly.

In 2006, after serving as a Bases Conversion Development Authority director, Laus was appointed president of the state-owned Clark Development Corp. (CDC). It was during Laus’ stint that Clark became a free port from a special economic zone. He resigned from the post in 2008 to focus on his businesses.

Aside from its car business, the group is into nonlife insurance, financing, media (TV, radio and print), real estate and restaurant operation.

The conglomerate is also the Pampanga franchise holder of the US-based Microtel by Wyndham chain.

Until his death, Laus was a member of the board of directors of North Luzon Expressway Corp.

Over the years, he received many awards and recognition, including the Presidential Medal of Merit in 2005 and Most Outstanding Kapampangan in the field of business with civic consciousness in 1991.

In 2008, he was named Most Distinguished Bedan by the San Beda College Alumni Association, Most Distinguished Alumnus in the field of business by Don Bosco Academy in 1983, and the school’s most Outstanding Alumnus when it marked its 50th Anniversary in 2007.

He was given the Outstanding Achievement Award by the CDC in 2008 and the Distinguished Bosconian Alumnus by Don Bosco Academy in 2016.

When his group helped victims of Supertyphoon “Yolanda” (international name: Haiyan) in Daanbantayan town, Cebu province, Laus was asked why he went the extra length of coming to their aid. He replied: “We are paying it forward.”

Laus is survived by his wife, Theresa, and children, Lisset L. Velasco, Paul, Carissa, Adrian Levy and Diorella. —WITH A REPORT FROM INQUIRER RESEARCH