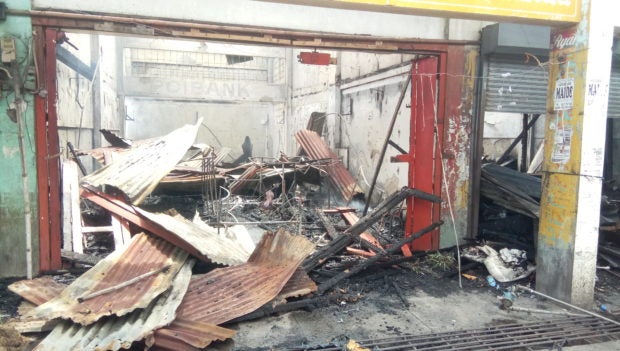 DIGOS CITY — The fire that razed the old public market in this city on Easter Sunday was not intentional, fire authorities here said on Wednesday.

Senior Fire Officer 1 Ruel Barreto, investigator of the Bureau of Fire Protection here, said they found no basis to conclude arson in the market fire, contrary to allegations spreading on social media and in some local radio stations that the market was intentionally burned down.

The fire razed all but four of the 51 stalls in the city’s old market building located along Luna Bataan in Barangay Zone 3 at dawn on Easter Sunday, April 21.

Barreto said the fire started at the Niko Choy Bakeshop situated in the middle of the market building and was caused by a coffee vending machine that was left unplugged.

He said the fire’s damage was estimated at P30.3 million.

Digos City Mayor Joseph Peñas on Wednesday, April 24, directed the concerned city officials to fast track the processing of financial aid to the fire victims, who, according to Barreto, were expected to be more than 47 since some stalls have two owners.

Peñas also urged the public to be cautious because the extreme heat brought on by El Niño could also trigger a fire.