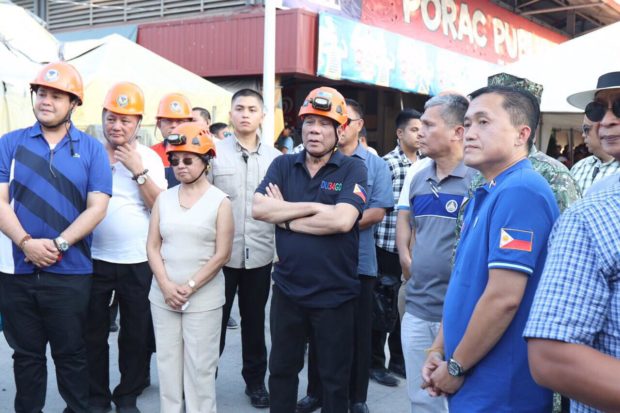 SAN FERNANDO CITY, Pampanga — President Rodrigo Duterte on Tuesday ordered the suspension of business operations of all branches of Chuzon Supermarket in Pampanga after one of its buildings collapsed in Porac town.

“So it would be good at this time to just give them the advice to stop, cease and desist in doing business until such time that the clearance given by government, whether city engineer or whoever is competent to review the planning,” the President added.

The President questioned why the four-story building, which he said was built only four years ago, collapsed.

Interior Secretary Eduardo Año responded to the President, saying: “I asked around and this could be because of the structural design of the supermarket. It is only good for a second floor, but it was actually constructed up to fourth floor.”

Before President asked for a cease-and-desist order, Año said he was supposed to issue “a memorandum circular to LGUs that have Chuzon Supermarket in their jurisdiction to temporarily suspend the business permit until we have pre-assessed the structural integrity of these supermarkets.”

Año said the owner of the supermarket had been summoned by the Criminal Investigation and Detection Group (CIDG) on Tuesday afternoon.

“So before we let the supermarket go into business operation we have first to assess,” he said. “There are about I believe four other Chuzon Supermarket around Pampanga.”