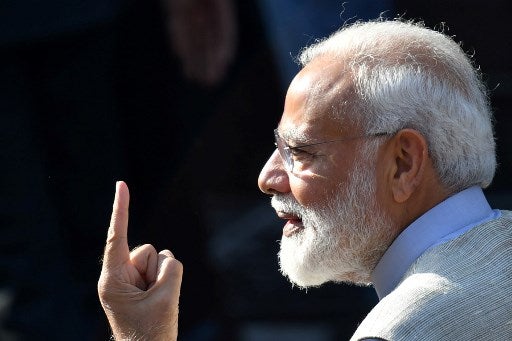 Indian Prime Minister Narendra Modi displays his ink-marked finger after casting his vote during the third phase of general elections at a polling station in Ahmedabad on April 23, 2019.  AFP

AHMEDABAD, India — Prime Minister Narendra Modi cast his vote on India’s “Super Tuesday” when the biggest number of seats are decided in the country’s marathon election.

The nationalist leader compared voting to Hindus cleansing their sins by bathing in the Ganges river after he cast his ballot in his home state of Gujarat.

The 117 seats over 15 states being fought for on Tuesday are the biggest number of any of the seven stages of voting over six weeks.

While Modi’s right wing Bharatiya Janata Party (BJP) is considered the frontrunner in the vote, it faces a tough challenge from the opposition Congress party of Rahul Gandhi.

Modi met his 98-year-old mother and then waved to supporters from an open top car that took him to vote in Ahmedabad, Gujarat’s main city.

The prime minister, who ruled the western state for over a decade before leading his party to national power in 2014, has stressed at rallies the need for the 900 million electorate to turn out.

“By voting, I feel the same sense of purity that one gets by taking bath at the Kumbh festival,” he said, referring to the mass bathing by Hindus in the Ganges.

Modi has made national security and fighting terrorism his main campaign theme to blunt opposition attacks on his handling of the economy.

Many see the election as a referendum on his five-year rule — which has seen impressive economic growth but not the jobs that the BJP promised.

Gujarat sends 26 lawmakers to the Indian parliament and the right-wing BJP won all of those seats in 2014.
Modi voted in the constituency where his close associate Amit Shah, the BJP president and key powerbroker, is contesting his maiden election.

Gandhi is standing in Wayanad in Kerala state, taking a risk as south India is considered a stronghold of regional parties.

The opposition party leader says contesting Wayanad is a sign of his commitment to southern India. His opponents say it shows he fears defeat in his traditional seat in the northern state of Uttar Pradesh.

Under Indian election law, candidates can contest two seats, though they can only keep one if they win both. Gandhi is also on the ballot for Amethi in Uttar Pradesh.

Round three of seven

Turnout was robust in the first two rounds of voting, on April 11 and 18, with around 70 percent of eligible voters taking part.

Heavy security has been put in place for voting, though violence has still been reported, with Maoist rebels carrying out bomb and shooting attacks.

Election results are to be released on May 23 and analysts say Modi is not expected to see a repeat of the BJP’s 2014 performance, when they won 282 seats.

Modi has capitalized on nationalist fervor that followed India’s air strikes on Pakistan in February in a dispute over Kashmir.

India accused its neighbor of harboring a militant group that claimed a deadly suicide bombing in Kashmir.
The fractured opposition, led by Congress, has sought to attack the government over employment, the economy and a debt crisis for Indian farmers. /ee