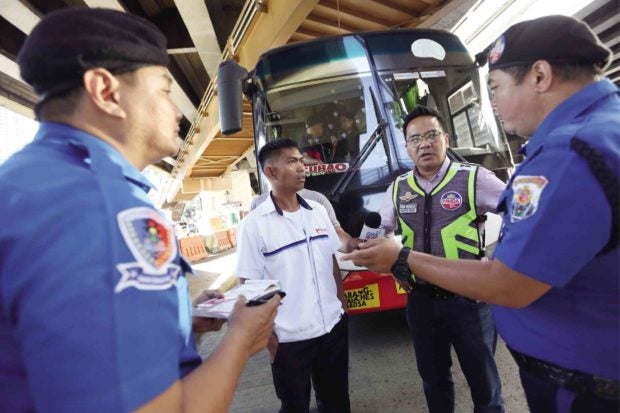 MANILA, Philippines — Only one provincial bus stopped at the recently opened Valenzuela Gateway Complex terminal in Valenzuela City on Monday, the first day of the dry run for a ban on provincial buses on the busy thoroughfare of Edsa.

Officials of the Metropolitan Manila Development Authority (MMDA), however, were unfazed since it was only the start of the dry run before the ban would take effect in June.

“We have no expectations at all since [compliance is] voluntary,” said MMDA spokesperson Celine Pialago.

She added that as of 1 p.m., only one bus of Victory Liner Inc. stopped at the terminal.

“We are asking the bus companies and the commuters to try and visit the interim bus terminal to address concerns that it is not feasible or complete,” Pialago said. “We want to reiterate that we already have a terminal ready to accommodate buses and commuters for the long-term plan of banning provincial buses on Edsa.”

Under MMDA Regulation No. 19-002 approved in March by the Metro Manila Council — the MMDA’s policy-making body composed of the 17 Metro mayors — all business permits of bus companies with terminals on Edsa would be revoked to ease heavy traffic.

Their passengers, however, would need to take either a city bus or other public utility vehicles to get to Metro Manila.

While provincial buses would still be allowed to start and end their trips in their terminals on Edsa during the dry run, they would not be allowed to load or unload their passengers anywhere else on the thoroughfare.

As of 1 p.m. on Monday, the MMDA had flagged down and fined 86 provincial buses P500 each for the violation. A total of 48 others were each fined P1,000 for violating the closed-door policy.

“We encourage everyone to join the dry run so they could rehearse, be ready for any contingency [and allow the MMDA] to correct any mistake and address improvements in the policy,” he said.

“But whether they participate or not, this will not stop us from enforcing the policy. Time will come and, by June, they will be compelled to use those interim terminals,” Nebrija added.

While some bus company personnel said the MMDA’s newest policy would have little effect on their operations, one was concerned about their passengers’ welfare.

“We have passengers who are senior citizens, people with disabilities, and pregnant women. It’s more unfair to them because they have to travel longer to reach their destinations,” said Efren Omas Daniel, a dispatcher of Victory Liner Inc.

In Dagupan City, Raul Ecaldre, Victory Liner’s customer care superintendent, said the terminal-to-terminal scheme was not new to them, adding that their deluxe buses unload passengers only at their Quezon City, Manila and Pasay City terminals.

In Bulacan province, Julius Macario, personnel representative of German Espiritu Liner, said that while they welcomed the MMDA policy, their passengers had complained of spending more time and money to reach their destinations.

Kyle Cayabyab, who travels between Makati City and Baguio for work, said the closure of bus terminals on Edsa would mean additional expenses and a longer travel time.

Meanwhile, Southern Luzon bus operators affected by the Edsa ban expressed hope that the Department of Transportation would approve their petition.

They are seeking the expansion of the coverage of city bus operations to include Calamba City in Laguna province, where an average of “12,000 to 15,000” people commute to Metro Manila daily, a bus operator said.

“What we’ve been saying is that these are not just once-in-a-blue-moon commuters but people who travel to work or do business in Manila every day. It’s very inconvenient for a commuter when you have to get off in Pasay City (bus terminal) and travel back, say, to Magallanes (the commuter’s destination),” said the operator, who requested anonymity in fear of drawing the government’s ire. —WITH REPORTS FROM MARICAR CINCO, TONNETTE OREJAS, GABRIEL CARDINOZA, CARMELA REYES-ESTROPE, VALERIE DAMIAN AND NIKKA G. VALENZUELA