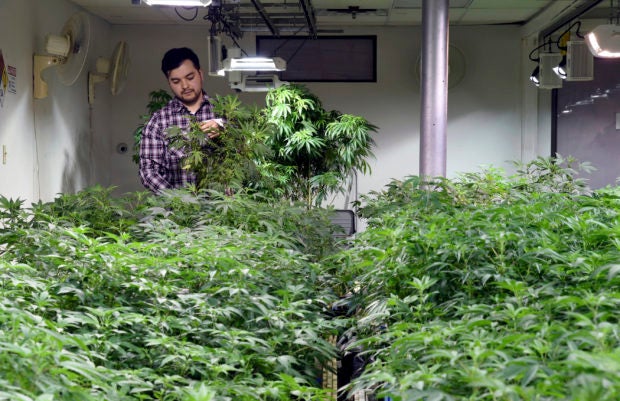 In this April 3, 2019, file photo, Oswaldo Barrientos picks dead leaves from marijuana plants at the grow facility where he works near downtown Denver. Immigration authorities on Friday, April 19, 2019 said that anyone with any involvement with marijuana, regardless of whether it’s legal in the state they live in, can be denied from citizenship because the drug is still outlawed by federal law. (AP Photo/Thomas Peipert, File)

PHOENIX (AP) — Immigration authorities on Friday said that anyone with any involvement with marijuana, regardless of whether it’s legal in the state where they live, can be denied citizenship because the drug is still illegal under federal law.

The announcement comes weeks after officials in Colorado, where recreational marijuana is legal, began warning residents that working for a dispensary or manufacturing operation could jeopardize their citizenship bids — even if those jobs are state-sanctioned.

The updated guidance from the U.S. Citizenship and Immigration Services states that people who use marijuana or are involved with it in any way fail to have “good moral character,” a prerequisite for people who have legal permanent residence to gain American citizenship.

“U.S. Citizenship and Immigration Services is required to adjudicate cases based on federal law,” spokeswoman Jessica Collins said in a statement. “Individuals who commit federal controlled substance violations face potential immigration consequences under the Immigration and Nationality Act (INA), which applies to all foreign nationals regardless of the state or jurisdiction in which they reside.”

In Colorado, immigration attorneys say at least two green-card holders were denied citizenship because they worked or had worked in marijuana-related jobs. There are probably more, they say.

Immigrants who apply for citizenship must first fill out a 20-page form known as the “N-400.” It asks about prior work, family and criminal history, but it doesn’t specifically ask if a person has used or worked with marijuana.

Julia Gelatt, a senior policy analyst for the Migration Policy Institute, said it’s not likely that most people will disclose information about pot use. But she said the new policy could make some people nervous about applying.

“Whether or not it has a real impact is whether adjudicators decide to ask about it,” Gelatt said. /jpv