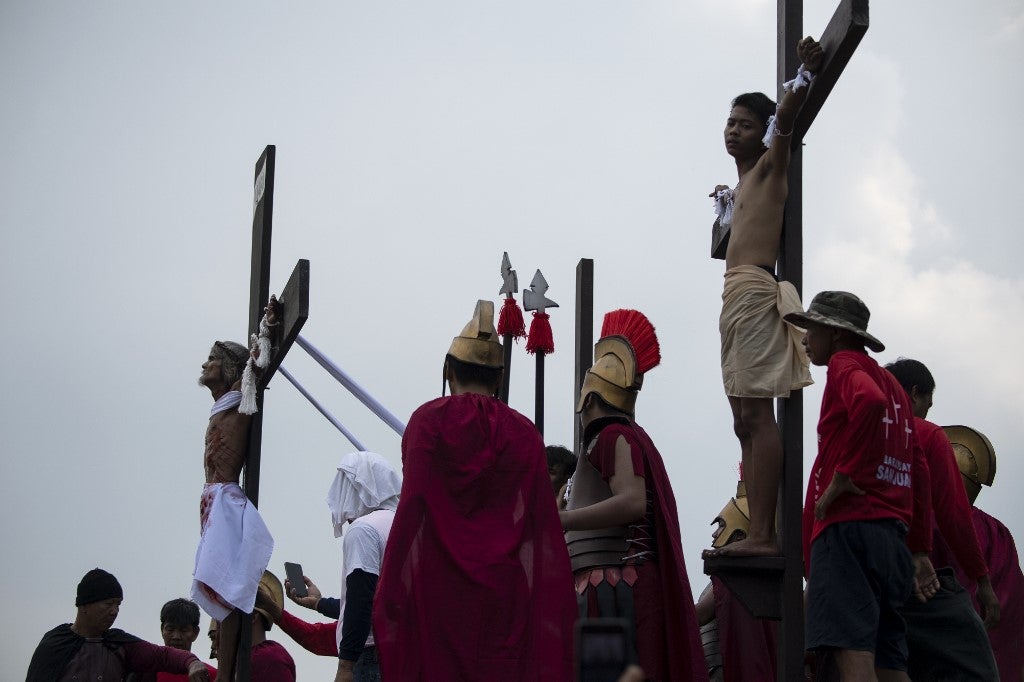 A Philippine Christian devotee is nailed to a cross during a reenactment of the Crucifixion of Christ during Good Friday ahead of Easter in San Juan, Pampanga, on April 19, 2019. – Hundreds of barefoot men beat themselves with flails and at least 10 were to be nailed onto crosses throughout Good Friday in a blood-soaked worship display in the Philippines, Asia’s Catholic outpost. (Photo by Noel CELIS / AFP)

CITY OF SAN FERNANDO — Eight men and a woman took to real-life crucifixion in three villages in this Pampanga capital on Good Friday.

Ruben Enaje, 58, had himself crucified for the 33rd time this year in Barangay San Pedro Cutud.

Mary Jane Sason, 44, had herself nailed in Cutud for the fourth time, although she is a resident of nearby Sta. Lucia.

Edison Francisco, 46, had his 8th crucifixion in Cutud outside his hometown Lubao.

Angelito Las Piñas, 41, held his 12th crucifixion in Cutud, outside his residence in Angeles.

Roland Aquino, 48, another resident of Cutud also had himself crucified on Good Friday.

In nearby Barangay San Juan, Wilfredo Salvador, 62, was the only one who took to the cross.

They got themselves crucified as a form of thanksgiving, to ask for cure and solutions for serious ailments and problems, or to seek forgiveness.

With only nine people registering this time, the number of penitents doing this painful form of penance has steadily gone down since 2015 when they totaled 11, the lowest then on record.