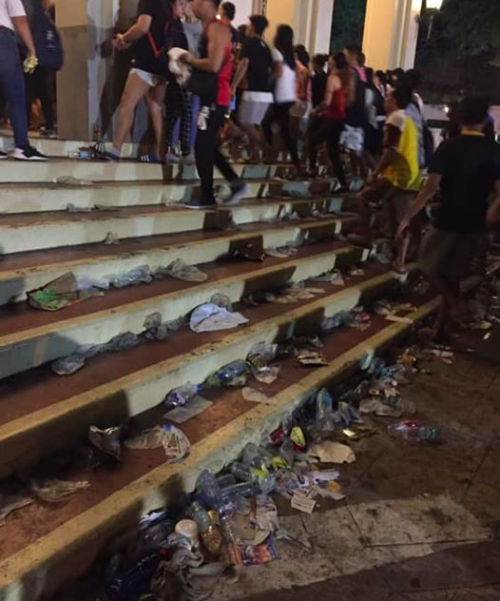 MANILA, Philippines — Aside from joining religious activities, Filipino Catholics appear to have developed another ‘tradition’ during the Holy Week.

Non-government organization EcoWaste Coalition said it had become a yearly habit for pilgrims to throw their trash anywhere.

The group made the statement after they said three different places of worship were filled with trash on Good Friday.

“Despite the repeated announcement aired over the public address system, some devotees who went to popular Lenten pilgrimage sites on Maundy Thursday and Good Friday chose to leave a trail of garbage behind,” EcoWaste Coalition said in a statement.

The group “lamented that littering had become a ‘tradition’ tarnishing the annual journey of the faithful to favorite pilgrimage destinations in the provinces of Bulacan and Rizal.”

Members of the group who were deployed to different places of convergence said that littering was rampant at the Our Lady of Lourdes Grotto Shrine in San Jose del Monte City and the National Shrine of the Divine Mercy in Marilao, both in Bulacan; and at the Our Lady of Peace and Good Voyage Cathedral in Antipolo City, Rizal.

“Among the most littered items reported were paper and plastic materials used by visitors for picnicking, resting and sleeping, plastic bags, food packaging, food leftovers, and lots of plastic bottles,” the group said.

According to Ecowaste National Coordinator Aileen Lucero, the pilgrims do not have any reason to leave their garbage in the places of worship or to waste food.

“It’s apparent that many devotees have yet to appreciate the connection between the expression of our faith and our responsibility to take good care of our shared environment. Environmental apathy, sad to say, is still very prevalent,” she said.

Bread given by good Samaritans were also seen lying on the ground or in the garbage pile.

“What a waste!” Lucero said.

Rivera appealed to devotees to treat the church with respect as it is not a giant garbage bin.

Lucero also relayed that at the Our Lady of Lourdes Grotto Shrine, improvised sleeping materials and campaign posters were found scattered around the church and the Stations of the Cross.

She hopes that faith-inspired events such as the Holy Week pilgrimage will inspire people to have a higher sense of responsibility and observe proper waste disposal.

“In fact, faith-inspired efforts should set a higher benchmark with respect to the responsible use and protection of the earth’s resources,” Lucero said.

“Let us be reminded by what our bishops have said: ‘We are not owners of the earth. We are its stewards, to keep and cherish and nurture its resources not only for ourselves but for future generations,’” she added. /ee