MANILA, Philippines—The recently-signed 2019 national budget underwent scrutiny to ensure that it “conforms strictly” with the law and is free of any unconstitutional “pork” allocations.

“Like we said before, there will be no pork in this budget. This budget has been vetted in a way that it conforms strictly with past Supreme Court decisions and jurisprudence as regards (kung) ano ‘yung bawal,” Nograles said Wednesday in a forum in Malate, Manila. 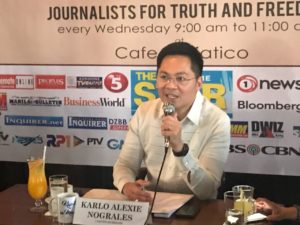 “We’re not just talking of pork (here), we’re also talking of DAP (Disbursement Acceleration Program). So everything here is in conformity with those rulings and other rulings of the Supreme Court pertaining to the budget,” he added.

Duterte signed the long-delayed budget last Monday but vetoed P95.3 billion worth of public works projects, which according to some senators were “pork” inserted by lawmakers after the two chambers ratified the budget bill.

READ: Duterte on budget impasse: ‘I will not sign anything illegal’

Nograles, a former lawmaker, also said that Duterte would not allow a pork-laden budget.

Earlier, Duterte said he would not sign the budget if it turned to be “illegal.”

Senate President Vicente Sotto III claimed that the House made P79 billion worth of realignments in the budget but Andaya, who chairs the House appropriations committee, claimed that it was the Senate that realigned billions in the ratified version of the budget. /je