Rebuilding Notre Dame will be long, fraught and expensive 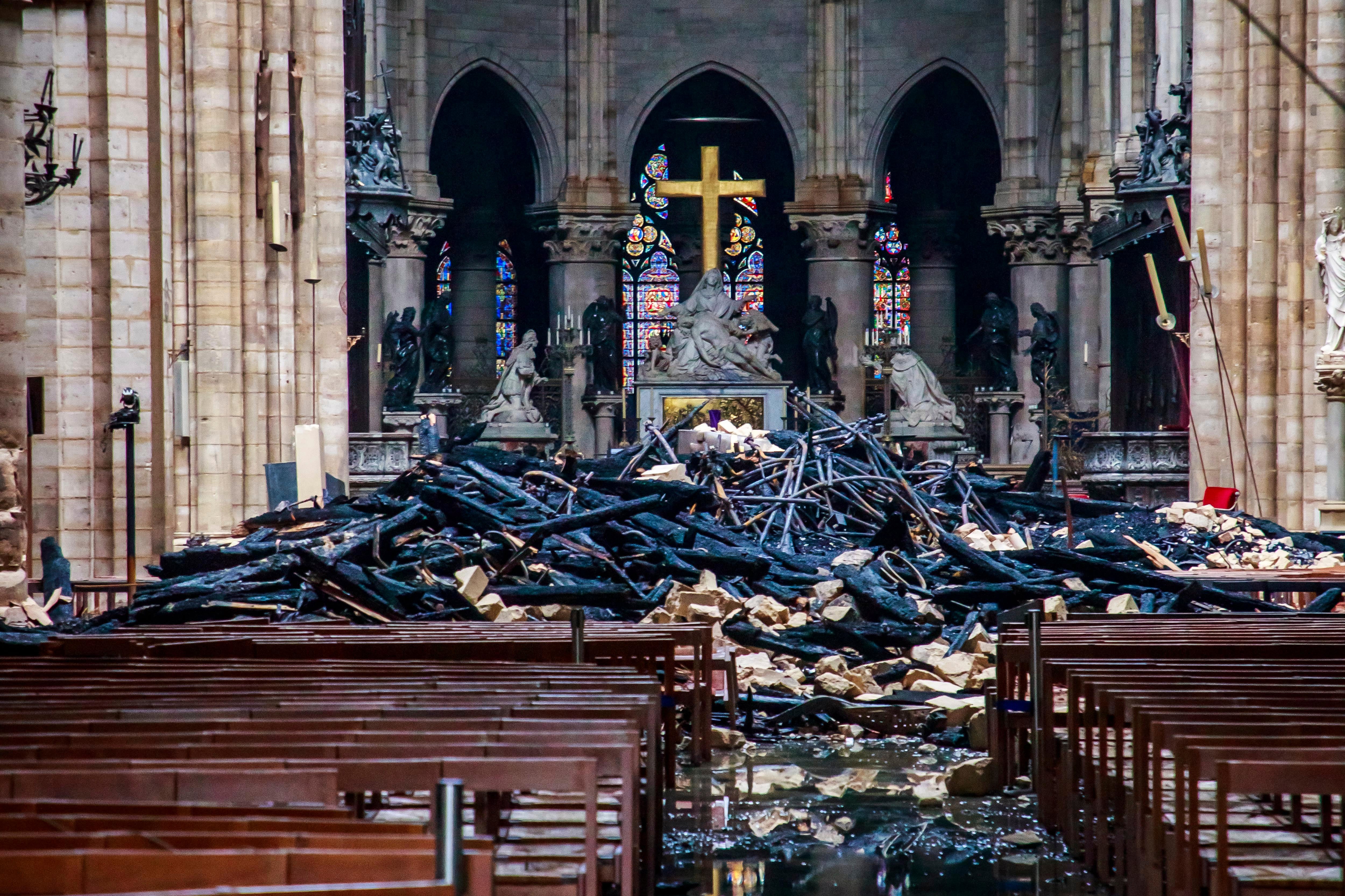 A hole is seen in the dome inside Notre Dame cathedral in Paris, Tuesday, April 16, 2019. Firefighters declared success Tuesday in a more than 12-hour battle to extinguish an inferno engulfing Paris’ iconic Notre Dame cathedral that claimed its spire and roof, but spared its bell towers and the purported Crown of Christ. (Christophe Petit Tesson, Pool via AP)

LONDON  — Notre Dame in Paris is not the first great cathedral to suffer a devastating fire, and it probably won’t be the last.

In a sense, that is good news. A global army of experts and craftspeople can be called on for the long, complex process of restoring the gutted landmark.

The work will face substantial challenges — starting immediately, with the urgent need to protect the inside of the 850-year-old cathedral from the elements, after its timber-beamed roof was consumed by flames .

The first priority is to put up a temporary metal or plastic roof to stop rain from getting in. Then, engineers and architects will begin to assess the damage.

Fortunately, Notre Dame is a thoroughly documented building. Over the years, historians and archeologists have made exhaustive plans and images, including minutely detailed, 3-D laser-scanned re-creations of the interior.

Duncan Wilson, chief executive of the conservation organization Historic England, said Tuesday that the cathedral will need to be made secure without disturbing the debris scattered inside, which may provide valuable information — and material — for restorers.

“The second challenge is actually salvaging the material,” he said. “Some of that material may be reusable, and that’s a painstaking exercise. It’s like an archaeological excavation.”

Despite fears at the height of the inferno that the whole cathedral would be lost, the structure appears intact. Its two rectangular towers still jut into the Paris skyline, and the great stone vault stands atop heavy walls supported by massive flying buttresses. An edifice built to last an eternity withstood its greatest test.

Now, careful checks will be needed to determine whether the stones of the vaulted ceiling have been weakened and cracked by the heat. If so, the whole vault may need to be torn down and re-erected.

The cathedral’s exquisite stained-glass rose windows appear intact but are probably suffering “thermal shock” from intense heat followed by cold water, said Jenny Alexander, an expert on medieval art and architecture at the University of Warwick. That means the glass, set in lead, could have sagged or been weakened and will need minute examination.

Once the building has been stabilized and the damage assessed, restoration work can begin. It’s likely to be an international effort.

“Structural engineers, stained-glass experts, stone experts are all going to be packing their bags and heading for Paris in the next few weeks,” Alexander said.

One big decision will be whether to preserve the cathedral just as it was before the fire, or to take a more creative approach.

It’s not always a straightforward choice. Notre Dame’s spire, destroyed in Monday’s blaze, was added to the Gothic cathedral during 19th-century renovations. Should it be rebuilt as it was, or replaced with a new design for the 21st century?

Financial and political considerations, as well as aesthetic ones, are likely to play a part in the decision.

Getting materials may also be a challenge. The cathedral roof was made from oak beams cut from centuries-old trees. Even in the 13th century, they were hard to come by. Nickson said there is probably no country in Europe with big enough trees today.

Alternatives could include a different type of structure made from smaller beams, or even a metal roof — though that would be unpopular with purists.

The restored building will have to reflect modern-day health and safety standards. But Eric Salmon, a former site manager at the Paris cathedral, said it is impossible to eliminate all risk.

“It is like a street accident. It can happen anywhere, anytime,” said Salmon, who now serves as technical director at the Notre Dame cathedral in Strasbourg, France.

The roof of Strasbourg’s Notre Dame was set ablaze during the 1870 Franco-Prussian War. It took up to five years to restore the wooden structure. Nowadays the roof is split into three fire-resistant sections to make sure one blaze can’t destroy it all. Smoke detectors are at regular intervals.

Still, Salmon said that what worked in Strasbourg may not be suitable for Paris. Each cathedral is unique.

“We are not going to modify an historic monument to respect the rules. The rules have to be adapted to the building,” he said.

Experts agree the project will take years, if not decades. Audrey Azoulay, director-general of UNESCO, the United Nations’ cultural organization, said restoring Notre Dame “will last a long time and cost a lot of money.” A government appeal for funds has already raised hundreds of millions of euros (dollars) from French businesses.

But few doubt that Notre Dame will rise again.

“Cathedrals are stone phoenixes — reminders that out of adversity we may be reborn,” said Emma Wells, a buildings archaeologist at the University of York.

“The silver lining, if we can call it that, is this allows for historians and archaeologists to come in and uncover more of its history than we ever knew before. It is a palimpsest of layers of history, and we can come in and understand the craft of our medieval forebears.”  /muf

Read Next
Japan prof faces jail for telling students to make ‘ecstasy’
EDITORS' PICK
New strategies urged to improve public transport
Cherry Mobile teams up with Cloud Panda PH, launches online store
Someone from the Philippines can become $356 Million richer this Tuesday
Chaos as thousands return to work in Metro Manila
Leveling up your ‘lutong bahay’ with the kitchen companion you never knew you needed
Senate OKs on 3rd reading bill allowing school opening after August
MOST READ
‘If I had not been SolGen, I will make you eat your words,’ Calida tells Coco Martin
Chaos as thousands return to work in Metro Manila
51 percent of German firms holding back investments in PH, but not because of COVID-19
Senate OKs bill authorizing president to postpone opening of classes beyond August
Don't miss out on the latest news and information.