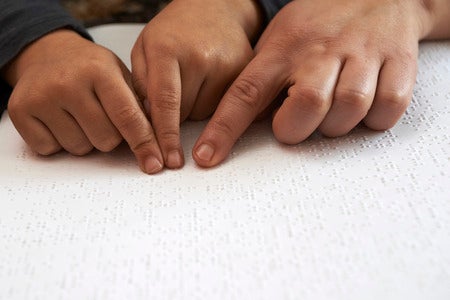 A blind child being taught how to read Braille, a tactile writing system for the visually-impaired. INQUIRER.net stock photo

A blind man from Jiangsu, China was rejected for a teaching job at the Nanjing School for the Blind, and now he is challenging the school’s rejection.

Zheng Rongquan is a recent graduate of Wenzhou University and was born with impaired vision, as per the China National Radio via South China Morning Post on April 16. He applied to the school in Nanjing last 2018, but was initially told his vision was not at the level required for a pre-employment physical examination.

Zheng went to the China Disabled Persons’ Federation for assistance, eventually letting the school allow him to take the test and get an interview. As per the report, he received top marks, but was still not offered with the teaching job.

The incident has prompted many netizens to give their sentiments regarding the issue on Chinese microblogging site Weibo. One was found saying that blind men are not suitable for any profession, while another said Chinese society is ignorant about the visually impaired and the talent and skills they offer.

Zheng also took to messaging app WeChat where he wrote a blog regarding his condition, saying he has enough vision to see students walk in and out of the classroom.

“Since I entered regular college, I’ve been trying to use my actions to help able-bodied people understand the visually impaired,” he said on Sunday, April 14.

Meanwhile, a staff member from the school said they are currently in the process of dealing with the issue and will release the results once they are ready.

“Recruitment is a complicated process and it does not concern only Zheng,” an unidentified staff member said in the report. The staff also declined to give further comment as to whether or not government officials are involved in the deliberation. Cody Cepeda/JB

Blind old man from Davao husks coconuts for a living