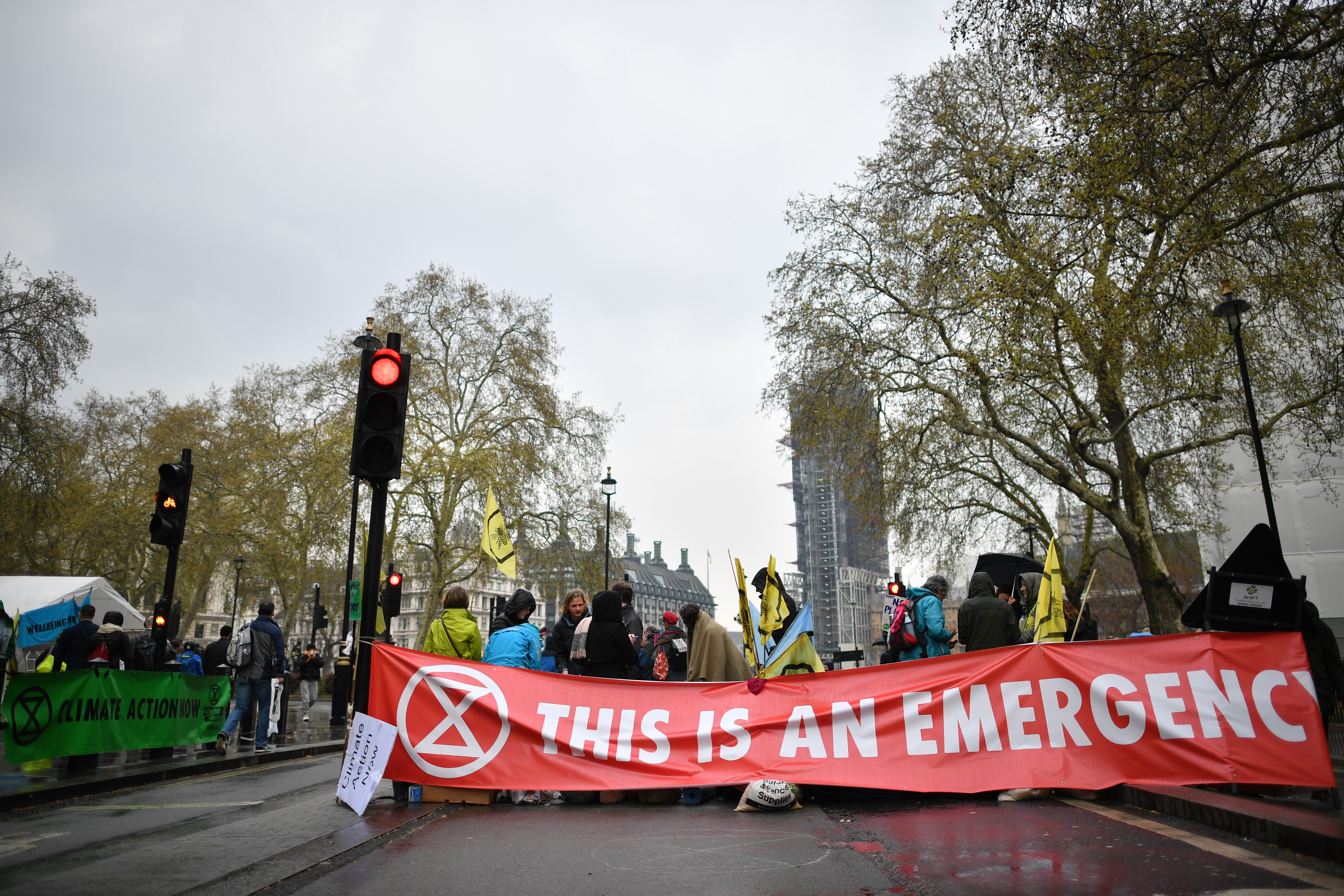 Protesters stand behind their banner blocking a road near Parliament Square in central London on the second day of an environmental protest by the Extinction Rebellion group on April 16, 2019. – Environmental protesters from the Extinction Rebellion campaign group started a program of demonstrations designed to block five of London’s busiest and iconic locations to draw attention to what they see as the “Ecological and Climate Emergency” of climate change. (Photo by Ben STANSALL / AFP)

LONDON — Nearly 300 people have been arrested in ongoing climate change protests in London that brought parts of the British capital to a standstill, police said Tuesday.

Demonstrators began blocking off a bridge and major central road junctions on Monday at the start of a civil disobedience campaign that also saw action in other parts of Europe.

The protests were organized by the campaign group Extinction Rebellion, which was established last year in Britain by academics and has become one of the world’s fastest-growing environmental movements.

London’s Metropolitan Police said that by Tuesday evening, 290 arrests had been made.

“We expect demonstrations to continue throughout the coming weeks,” the police statement said.

The arrest figure includes three men and two women who were detained at the UK offices of energy giant Royal Dutch Shell on suspicion of criminal damage.

Campaigners daubed graffiti and smashed a window at the Shell Centre building.

The majority arrested were seized for breaching public order laws and obstructing a highway.

The protest saw more than a thousand people block off central London’s Waterloo Bridge and lay trees in pots along its length. Later, people set up camps in Hyde Park in preparation for further demonstrations throughout the week.

The police have ordered the protesters to confine themselves to a zone within Marble Arch, a space at the junction of Hyde Park, the Oxford Street main shopping thoroughfare and the Park Lane street of plush hotels.

London mayor Sadiq Khan said he was “extremely concerned” about protesters’ plans to disrupt the underground on Wednesday.

“Targeting public transport in this way would only damage the cause of all of us who want to tackle climate change,” he said in a statement.

Extinction Rebellion spokesman James Fox said the group had attempted to maintain a blockade overnight at four sites in central London before the police came to impose the new restriction.

Protesters attached themselves to vehicles and to each other using bicycle locks, said the spokesman.

“We have no intention of leaving until the government listens to us,” he said.

“Many of us are willing to sacrifice our liberty for the cause.”  /muf