Lacson urges gov’t to exclude Sison from talks with Reds 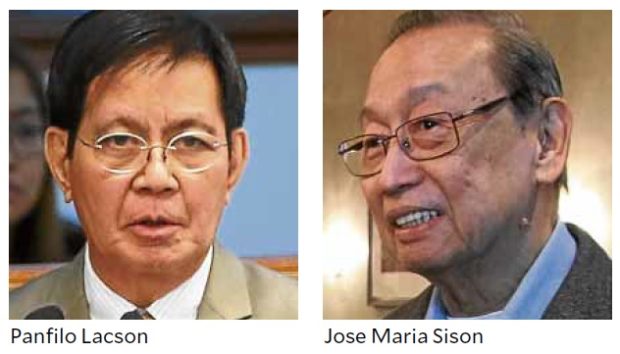 MANILA, Philippines — The government should focus on holding peace talks with rebels who do not listen to Communist Party of the Philippines (CPP) founder Jose Maria Sison as this could be more productive, Sen. Panfilo Lacson said on Tuesday.

Lacson said the government would have a better chance of ending the 50-year insurgency problem by holding localized peace talks and negotiating with rebels who resented Sison’s leadership.

“Such a move is long in coming. I have always believed that this is the better way to deal with the five-decade insurgency problem,” he said.

But it would be useless to deal with the Netherlands-based Sison because he does not have control anymore over the CPP’s armed wing, the New People’s Army (NPA), Lacson said.

“Experience has shown that while Sison asks for a ceasefire and [the] government accommodates his request, [rebels] continue conducting ambushes and raids. This shows Sison no longer has control over the NPA’s armed regulars,” he said.

This is why localized peace negotiations with other communist rebels could be productive, Lacson said.

The government’s new tack in dealing with the insurgents finally moved forward after President Rodrigo Duterte approved on Monday a national plan to integrate the government’s delivery of goods and services to areas affected by the communist insurgency with its peace and security operations.

The President endorsed the new strategy when he presided over the first meeting of the National Task Force to End Local Communist Armed Conflict in Malacañang.

The President created the task force to implement localized peace talks with the insurgents after he terminated negotiations with the communist-led National Democratic Front of the Philippines in March.

Lacson said he had been battling for localized peace talks and in fact “strongly suggested the same to former Peace Adviser Jesus Dureza and Labor Secretary Silvestre Bello III in a Senate committee hearing.”

According to the senator, governors and mayors could deal with local communist leaders in areas where the NPA is not that influential.

The Armed Forces could deal with areas where the NPA is a threat, he said.

At a press briefing on Tuesday, presidential spokesperson Salvador Panelo said the President “rallied” the government and the private sector during the task force meeting to work together to deal with violent conflicts, and build a culture of peace and development across the country.

“The President approved a national plan that would integrate and harmonize the various efforts of the [entire] government and of all sectors of society in delivering goods and services, as well as providing for peace and security, especially in conflict-affected communities,” Panelo said.

The President will direct each member of his Cabinet “to oversee the peace and development efforts in all regions of the country” in order “to effectively manage the whole-of-nation movement.”