Prosecutor: No evidence of arson at Notre Dame 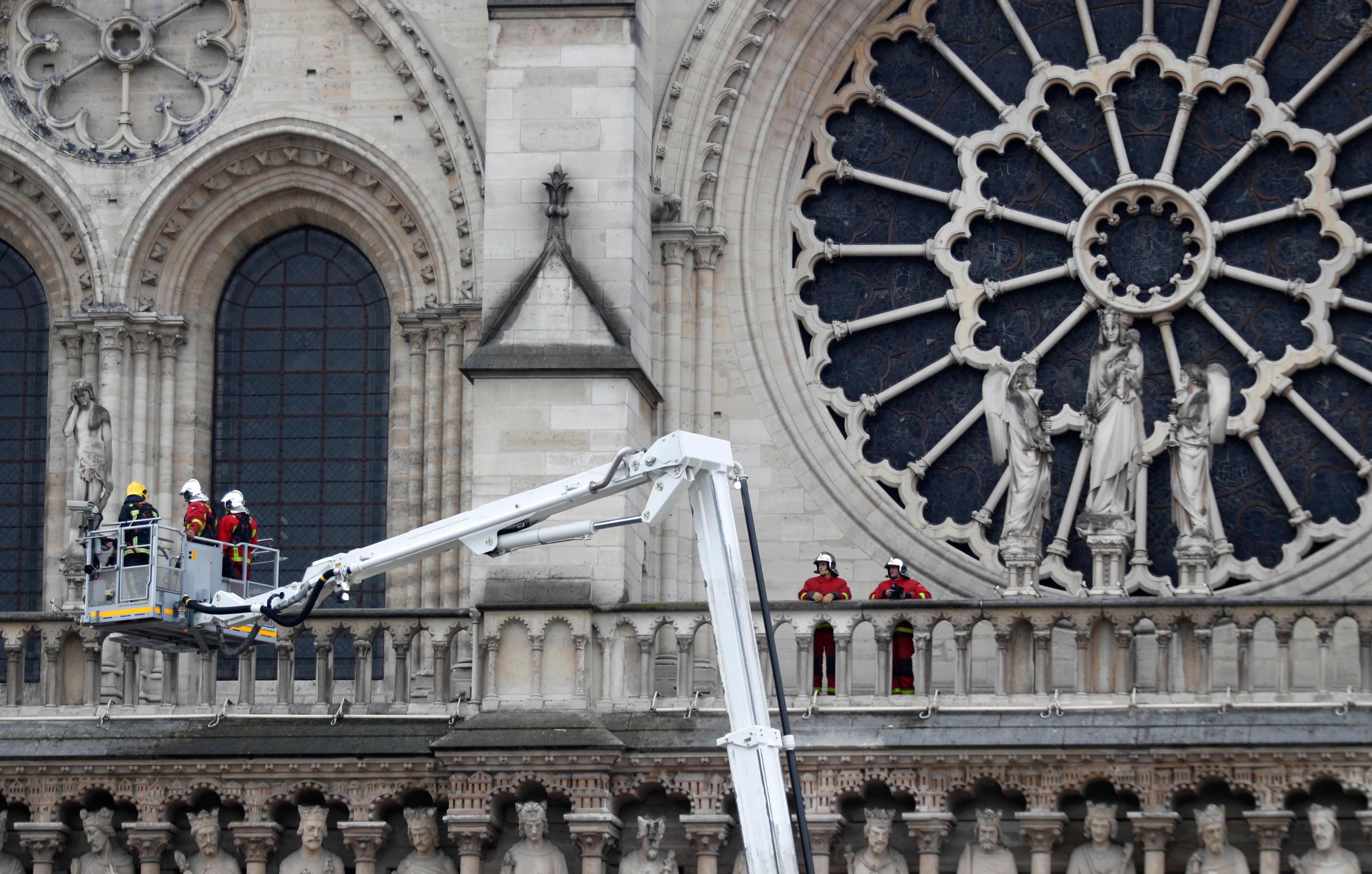 Firefighters work at the facade of Notre Dame cathedral Tuesday April 16, 2019 in Paris. Experts assessed the blackened shell of Paris’ iconic Notre Dame Tuesday morning to establish next steps to save what remains after a devastating fire destroyed much of the cathedral that had survived almost 900 years of history. (AP Photo/Thibault Camus)

PARIS (AP) — The Paris prosecutor said there’s no evidence of arson in the Notre Dame fire and that they’re working on the assumption that the blaze was an accident.

Speaking Tuesday, after the blaze was put out, Remy Heitz said five investigators are working on the probe. He said they will be interviewing workers from five companies that had been hired to work on renovations to the cathedral’s roof, which was being repaired before the fire and where the flames first broke out.

Heitz said the investigation will be “long and complex.”

Meanwhile, an aide said Poland’s president, Andrzej Duda, has offered assistance and Polish specialists for the task of rebuilding the Notre Dame Cathedral that was damaged by the 15-hour long fire.

Krzysztof Szczerski said Tuesday that Duda has written to French President Emmanuel Macron to express Poland’s grief and solidarity at the loss of heritage and cultural identity.

He said that in a gesture of “European solidarity” Duda offered Poland’s experience and world-class experts in the reconstruction of historic buildings. Warsaw and many other places were rebuilt from World War II rubble.

He also said a Polish chapel at the cathedral was affected by the fire but was not damaged.

A precious copy of Poland’s most revered icon as well as relics of Polish-born pope St. John Paul II have been rescued from the blaze.

Germany’s foreign minister, meanwhile, said his country is prepared to help with the rebuilding of Notre Dame.

Heiko Maas wrote on Twitter that Macron has called for help from outside France and “Germany stands ready to do that in close friendship.”

Maas added that “we are united in sorrow. Notre Dame is part of the cultural heritage of mankind and a symbol for Europe.” 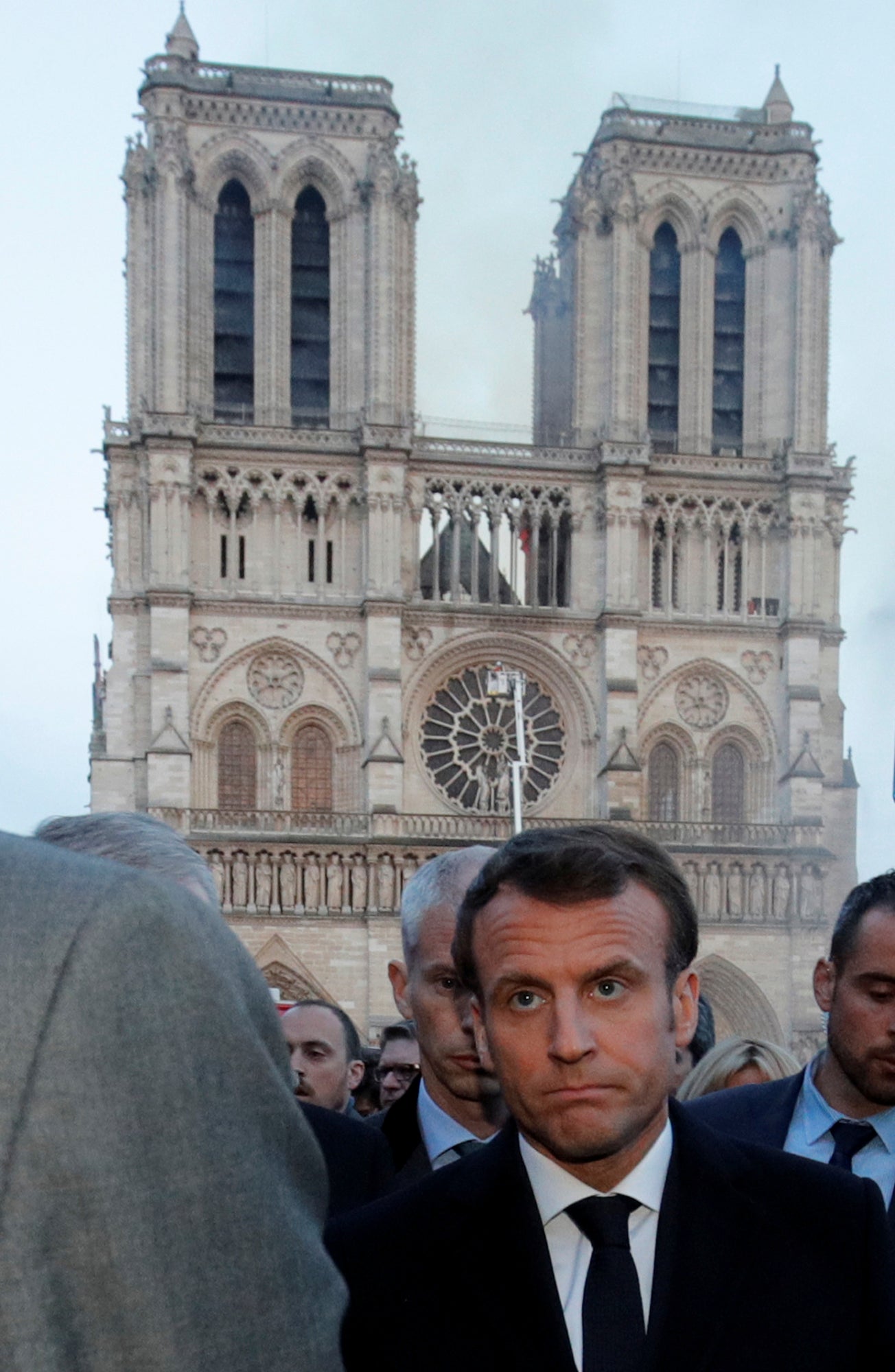 French President Emmanuel Macron walks by Notre Dame Cathedral during his visit to the site in Paris, Monday, April 15, 2019. A catastrophic fire engulfed the upper reaches of Paris’ soaring Notre Dame Cathedral as it was undergoing renovations Monday, threatening one of the greatest architectural treasures of the Western world as tourists and Parisians looked on aghast from the streets below.(Philippe Wojazer/Pool via AP)

Egypt’s top Muslim cleric has also expressed sadness over the fire at Notre Dame, which he even described as a “historic architectural masterpiece.”

Sheikh Ahmed al-Tayeb, the grand imam of Al-Azhar, the Sunni Muslim world’s seat of learning, wrote on Facebook: “Our hearts are with our brothers in France.”

Copts head Pope Tawadroz II said in a statement that the fire was a “huge loss for entire humanity” and affected “one of the most important monuments in the world.”

Pope Francis, for his part, has prayed for French Catholics and the Parisian population “under the shock of the terrible fire” that ravaged the Notre Dame cathedral.

Vatican spokesman Alessandro Gisotti said on Twitter on Tuesday that the Pope “is close to France” and that he is offering prayers “for all those who are trying to cope with this dramatic situation.”

The Vatican on Monday expressed “shock and sadness” at the fire that caused extensive damage to Notre Dame – “a symbol of Christianity in France and in the world.”

The impressive organ dates to the 1730s and was constructed by Francois Thierry. It boasts an estimated 8,000 pipes.

Gregoire also described “enormous relief” at the salvaging of pieces such as the purported Crown of Christ. 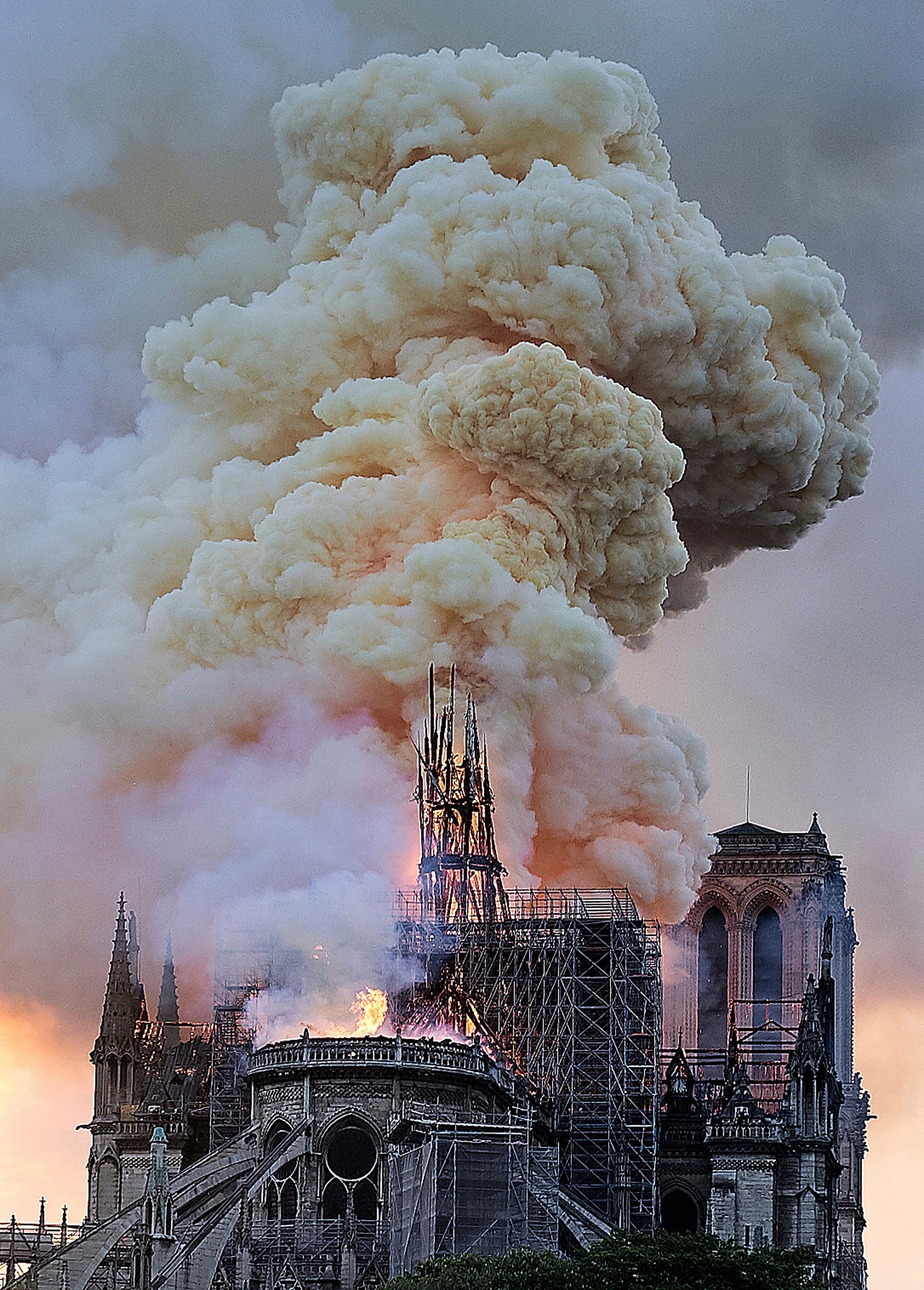 Flames and smoke rise as the spire on Notre Dame cathedral collapses in Paris, Monday, April 15, 2019. Massive plumes of yellow brown smoke is filling the air above Notre Dame Cathedral and ash is falling on tourists and others around the island that marks the center of Paris. (AP Photo/Diana Ayanna)

As this developed, funding for the reconstruction of Notre Dame is piling up at a spectacular rate, with two of France’s richest families together quickly pledging 300 million euros.

Businessman Francois-Henri Pinault and his billionaire father Francois Pinault said they were immediately giving 100 million euros from their company, Artemis, to help finance repairs to the cathedral.

A statement from Francois-Henri Pinault said: “This tragedy impacts all French people” and “everyone wants to restore life as quickly as possible to this jewel of our heritage.”

That donation was then trumped by French tycoon Bernard Arnault and his luxury goods group LVMH, which pledged 200 million euros.

LVMH called the cathedral a “symbol of France, its heritage and its unity.”

European Union chief Donald Tusk is calling on the bloc’s member countries to help France rebuild the fire-ravaged Notre Dame, saying the site in Paris is a symbol of what binds Europe together.

Tusk, who chairs summits of EU national leaders, told lawmakers Tuesday that the blaze reminds Europeans of “how much we can lose.”

Tusk said: “At stake here is something more than just material help. The burning of the Notre Dame cathedral has again made us aware that we are bound by something more important and more profound than treaties.”

Bertrand de Feydeau, vice president of preservation group Fondation du Patrimoine, told France Info radio that the wooden roof that went up in flames was built with beams more than 800 years ago from primal forests.

He said the cathedral’s roof cannot be rebuilt exactly as it was before the fire because “we don’t, at the moment, have trees on our territory of the size that were cut in the 13th century.”

He said the restoration work will have to use new technologies to rebuild the roof.

Experts were also assessing the blackened shell of the Notre Dame cathedral to establish next steps to save what remains of it.

Junior Interior Minister Laurent Nunez announced that architects and other experts would meet at the cathedral early Tuesday “to determine if the structure is stable and if the firefighters can go inside to continue their work.”

Even as officials consider the fire an accident, possibly a result of restoration work taking place at the global architectural treasure, such news has done nothing to ease national mourning. /kga