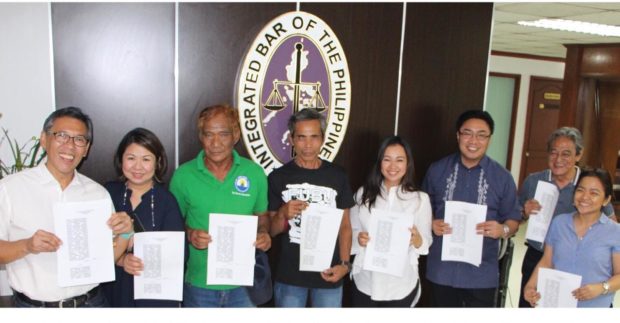 Fisherfolk from Palawan and Zambales represented by the Integrated Bar of the Philippines ask the Supreme Court to compel the government to protect the environment in the West Philippine Sea. PHOTO from IBP.

MANILA, Philippines — Citing the failure of the Duterte Cabinet and the head of government agencies to protect the maritime environment in the West Philippine Sea, fisherfolk from Palawan and Zambales turned to the Supreme Court for help.

In a 34-page petition, the fisherfolk, represented by the Integrated Bar of the Philippines (IBP), on Tuesday filed a petition for the issuance of the Writ of Kalikasan and the Writ of Continuing Mandamus.

The petitioners want the high court to compel the government to enforce environmental laws to protect, rehabilitate, and prevent further damage to the environment in Scarborough or Panatag Shoal, Ayungin Shoal, and the Mischief Reef or the Panganiban Reef.

“Respondents have failed to perform their duties [in enforcing] environmental laws and regulations,” read the petition.

The Department of Justice (DOJ), on the other hand, “is mandated to strengthen the prosecution and conviction of violators of fishery laws,” based on the Fisheries Code.

The petition was filed in time with reports that Chinese ships have been harvesting giant clams in the Scarborough Shoal.

“Chinese fishermen harvested endangered and threatened species and used cyanide and explosives in their fishing… the marine environment and resources in the above-mentioned areas were damaged severely and extensively in spite of adequate Philippine laws to protect them. Clearly, the damage is brought upon by the lack of enforcement of Philippine environmental laws by respondents,” the petitioners said.

Petitioners also mentioned the island-building activities at the Panganiban Reef, which was cited in the Permanent Court of Arbitration ruling.

“Based on compelling evidence, expert reports, and critical assessment of Chinese claims described above, the Tribunal has no doubt that China’s artificial island-building activities on the seven reefs in the Spratly Islands have caused devastating and long-lasting damage to the marine environment,” they added.

The group explained that Ayungin Shoal and Panganiban Reef are part of the exclusive economic zone where the country has jurisdiction, as declared by the 2016 decision of the Permanent Court of Arbitration. The Scarborough Shoal, on the other hand, is part of the EEZ under Republic Act 9522 to the Philippine Baselines Law.

Since the three areas are part of the country’s EEZ, they said these should be covered by environmental laws of the country such as the Philippine Fisheries Code.

Petitioners said they sought relief from the SC because they “have no other plain, speedy and adequate remedy as petitioners are complaining of acts by the government agencies themselves who are supposed to be upholding Philippine environmental laws and protecting the environment and resources in Philippine territory.” /ee