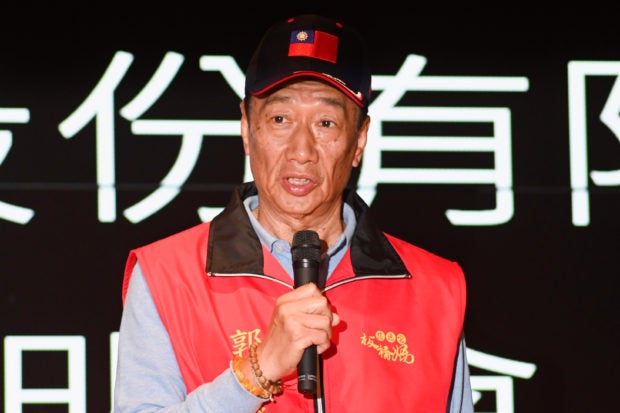 The 69-year-old said Monday that he would soon step back from frontline operations while remaining at the helm of the major Apple supplier.

But when asked by reporters Tuesday if he would run for president, he said: “I will have meetings today and hear (feedback). Hopefully we can talk about this tomorrow or later.”

Gou, a supporter of the Beijing-friendly opposition Kuomintang (KMT) party, said he would follow the party’s nomination procedure “if I were to join the KMT’s primary”.

“If (I were to) stand from the height of the president to ponder over Taiwan’s issues, I feel that peace, security, economy and future … are most important,” he said in comments aired by local tv channels.

Incumbent President Tsai Ing-wen, 62, of the Beijing-sceptic Democratic Progressive Party (DPP) has declared she is seeking re-election in the January 11 elections.

She faces the challenge of pro-independence former Premier William Lai in the party’s primaries, and the DPP is set to announce its presidential candidate later this month.

Also known by its official name Hon Hai Precision Industry, Foxconn is the world’s biggest contract electronics maker and assembles Apple iPhones as well as parts and accessories for other international brands.

Known for his aggressive dealmaking, Gou has been snapping up investments from Japan to India in a bid to diversify from electronics assembly.

Last year, Gou appeared alongside US President Donald Trump at a groundbreaking ceremony for a cutting-edge factory in Wisconsin, backed by $4 billion in controversial tax breaks.

However, Foxconn announced earlier this year that it was re-assessing its $10 billion plan for the factory due to changing global market environment.

Asked Tuesday if he would tell Trump should he decide to run for president, Gou said: “Why would I tell my decision to the US president? He is not (among) my voters. My voters are Taiwanese compatriots. My priority is tell the voters my decision.”

Gou was born in 1950 in Taipei to Chinese immigrant parents who had fled the Communist victory in China’s civil war. He studied shipping management in college while supporting himself with part-time jobs.

Read Next
Police seize 600 kilos of meth in Vietnam
EDITORS' PICK
PH walks back, suspends VFA termination ‘upon the President’s instruction’
Leveling up your ‘lutong bahay’ with the kitchen companion you never knew you needed
PH COVID-19 cases near 19K mark, as recoveries breach 4,000
South Korea clamps down again as virus rebounds
Cherry Mobile teams up with Cloud Panda PH, launches online store
San Juan City to launch pop-up bike lanes
MOST READ
Calida ‘just the lawyer, not the client’ and must ‘never lose his cool’ – Macalintal
7 members of nurse’s family in Laguna catch COVID-19
PH COVID-19 cases near 19K mark, as recoveries breach 4,000
Amid protests, Trump talks of war — and reelection
Don't miss out on the latest news and information.