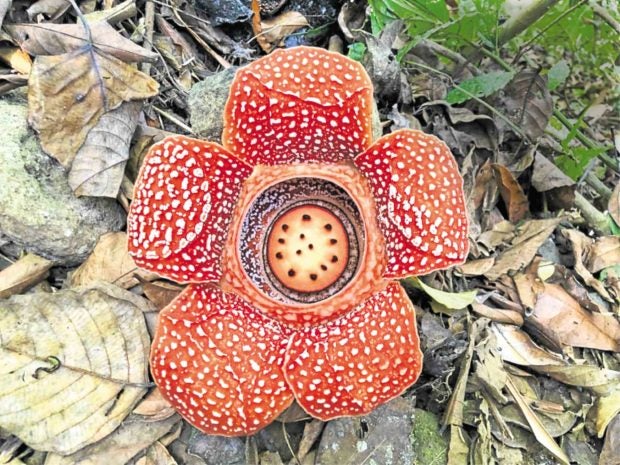 MT. MAKILING SHOW Rafflesia, a rare, putrid-smelling flower that can grow to a size of a saucer but lives only for a couple of days, is in bloom along the trails on Mt. Makiling, adding to the mountain’s mystique and making hiking more rewarding. —PHOTO COURTESY OF GIDEON LASCO

LOS BAÑOS, Laguna, Philippines — As if conquering Mt. Makiling’s peaks is not rewarding enough, hikers return to the trails through the tropical rainforest in Los Baños, Laguna province, to catch the “elusive” Rafflesia in bloom.

Commonly called the “malaboô,” Rafflesia is a parasitic plant that grows within the body of the Tetrastigma vine.

Its flower, the world’s largest, belongs to the Rafflesia arnoldii species as it could grow to as much as 1.5 meters in diameter, and blooms only from February to June.

Each flower lives for only a couple of days, though.

“They say it blooms these months, but we’re not even sure when exactly,” said Gideon Lasco, a medical anthropologist and hiker.

In recent weeks, however, several Rafflesia flowers, particularly those of Rafflesia lagascae (synonymous to Rafflesia panchoana) that is found on Makiling, were sighted by some along the trail.

The flowers were found close to the trail’s jump-off point on the campus of the College of Forestry of the University of the Philippines Los Baños (UPLB).

Lasco said his group saw at least seven during a hike last week.

Roberto Cereno, director of the UPLB Training Center for Tropical Resources and Ecosystems Sustainability, encourages hikers to bring cameras as the Rafflesia is “in its annual grandeur.”

People say it’s luck when they come across the rare flower.

“I have friends hiking on Sunday just to see the Rafflesia,” Lasco said in a phone interview on Monday.

He said he himself grew up in Los Baños but never saw one on Makiling until recently.

Even UPLB scientists are taking advantage of the Rafflesia bloom, calling their hikes to observe the flower a part of their “scientific penitence.”

Ireneo L. Lit Jr. and Aimee Lynn B. Dupo, curators of the UPLB Museum of Natural History, say it’s a penitence because not enough research is being done to know the floral biology of Rafflesias, especially on Mt. Makiling.

R. lagascae is one of the 14 Rafflesia species known in the Philippines, according to Lit.

It is endemic to the Philippines, although its DNA and other data gathered so far showed it is “most widely distributed” in Luzon.

A bloom of Makiling’s Rafflesia can grow to a size of a saucer, Lit said. But the ones which Lasco, for instance, saw in Iloilo and Mindanao, were as big as a plate. 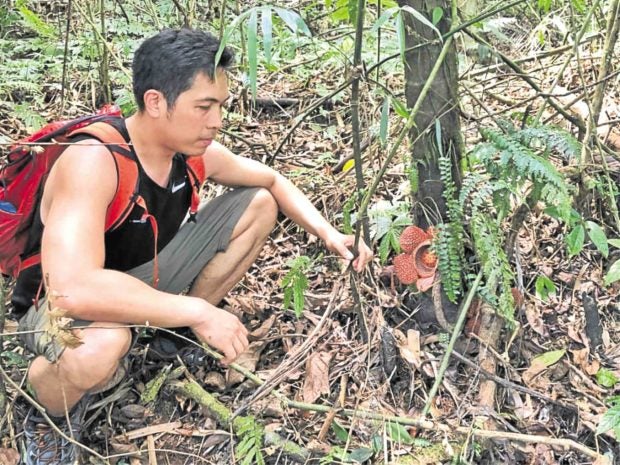 But what is notable among Rafflesia flowers is the presence of flies.

“Scientists, and even hikers, have observed since the early 1990s that flies are present on the blooming malaboô,” Lit says.

People have also observed the flower’s scent as something close to “decaying meat or putrescent fish.”

Scientists say the scent attracts carrion flies, which in turn pollinate the flowers.

An article of Lit’s account of at least seven fly species that commonly “visit” Rafflesia was published in the scientific journal The Philippine Entomologist.

“We do really hope to learn more about the ecology of the malaboô . . . Spread the word that not all things with flies are rotten,” Lit said.

Lasco, who reminded hikers not to touch or pick the Rafflesias, said he hoped the “interest” could trigger an advocacy to preserve natural heritage.

Read Next
Trump ups his attacks with Mueller report due Thursday
EDITORS' PICK
PH logs 665 new COVID-19 cases, lowest since July 2020
Gov’t eyeing COVID-19 vaccine booster for essential workers, indigents by Dec. 10
Villar Group gears up for AllValue Shopping Party on Dec. 3; around P 1-million promos and discounts up for grabs
Omicron poses ‘very high’ global risk, countries must prepare–WHO
A delightful blessing!
Legarda: Ending Violence Against Women, a cause for all
MOST READ
Quiboloy warns of ‘much worse than Omicron virus’ if his ‘persecution’ is not stopped
Bongbong Marcos’ conviction in tax case not a crime involving moral turpitude — lawyer
Omicron poses ‘very high’ global risk, countries must prepare–WHO
Marcoleta defends pol ads on ABS-CBN
Don't miss out on the latest news and information.