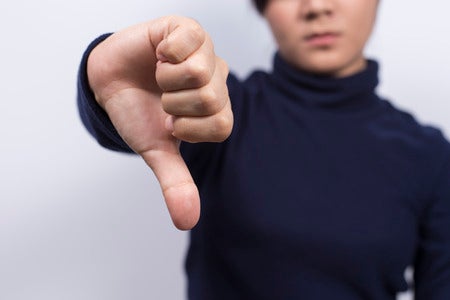 The Ad Standards Council (ASC) has released a statement following GlutaMAX’s controversial ad which encouraged consumers to avoid discrimination due to dark skin by using its skin whitening products.

The ads released this month drew flak for its negative message to women with brown skin and for supposedly promoting “fair skin privilege.” They have since been removed from the brand’s social media accounts.

INQUIRER.net has reached out to GlutaMAX regarding the issue but has yet to receive a response as of writing.

In one of the ads, a website was featured where one can share “unfair” experiences due to having dark skin.

Another ad cited a poll which made the claim that “3 in 5 Filipinos believe that people with fairer skin receive better treatment from others”. In the copy, it said that instead of getting angry, one should use their skin whitening products.

The ASC, whose mandate is to protect consumers from misleading, indecent and unlawful advertisements, said in a statement sent to INQUIRER.net today, April 15, that the GlutaMAX advertisement was not approved by them.

“ASC stands for responsible communications and abides by a strict code of ethics,” the ASC said. “In connection with the recent GlutaMAX skin care digital and outdoor ads, the materials posted and displayed were not approved by ASC.”

The ASC cited Article IV Section 1 item a. of their Code of Ethics on disparagement, which states: “Advertisements shall not directly or indirectly disparage, ridicule, criticize, or attack any natural or juridical person, groups of persons, or any sector of society, especially on the basis of gender, social or economic class, religion, ethnicity, race, or nationality.

The council added that the posting of a disapproved material, such as GlutaMAX’s ad, is in violation of their Manual of Procedures.

A violation of the council’s Code of Ethics and Manual of Procedures warrants a cease-and-desist order (CDO) and is in immediate effect from receipt of the CDO by the advertiser or ad agency. Any revisions on the material must be pre-screened again by the council prior to publication.

ASC penalties include a fine and a ban on the screening of advertising materials for months or up to a year, depending on the number of offenses incurred.

Meanwhile, GlutaMAX has since issued an apology following the backlash via their social media page today, April 15.

“We believe that the best intentions are never an excuse for causing harm,” GlutaMAX said. “And for all those that we’ve offended over the past few days, we offer our sincerest apologies.” NVG

Is your advertising insensitive?