MANILA, Philippines — An alleged notorious member of the Abu Sayyaf Group (ASG) was recently arrested by the police in Quezon City.

Esquivel said Indal, a 32-year-old native of Basilan and with aliases Annual Dasil and Abu Khair, was arrested inside a house at the Salam Compound in Barangay (village) Culiat on Friday at about 4:25 p.m., said Brigadier General Joselito Esquivel Jr., director of the Quezon City Police District (QCPD).

The arrest was a joint operation of the QCPD Criminal Investigation and Detection Unit, PNP Intelligence Group, and the Talipapa Police Station backed up by the Special Weapons and Tactics (SWAT) team.

During the arrest, Indal allegedly took a hand grenade under his pillow, but it was immediately seized from him by the arresting officers.

Esquivel said the police were still investigating why the suspect was in Metro Manila at the time of the arrest but said they did not find any document attesting that he plans to launch a terror attack.

He said Indal seems to be in the metropolis only to hide as a fugitive since he has a standing warrant of arrest in Basilan dated January 28, 2008.

“As of now we are treating him as a fugitive from the law who got arrested because of the warrant of arrest,” Esquivel said.

According to the QCPD chief, Indal was one of the trusted men of ASG Commander Fujuri Indama and a former member of ASG subleader Nur Hassan Jamiri who surrendered in March 2018.

Indal also allegedly participated in the kidnapping of 15 victims at the Golden Harvest Plantation in Barangay Tairan Lantawan in Basilan in June 2001, led by the slain ASG leader Isnilon Hapilon.

Aside from his previous cases, the suspect will face charges for illegal possession of explosives in relation to the Omnibus Election Code and disobedience to a person in authority. /cbb 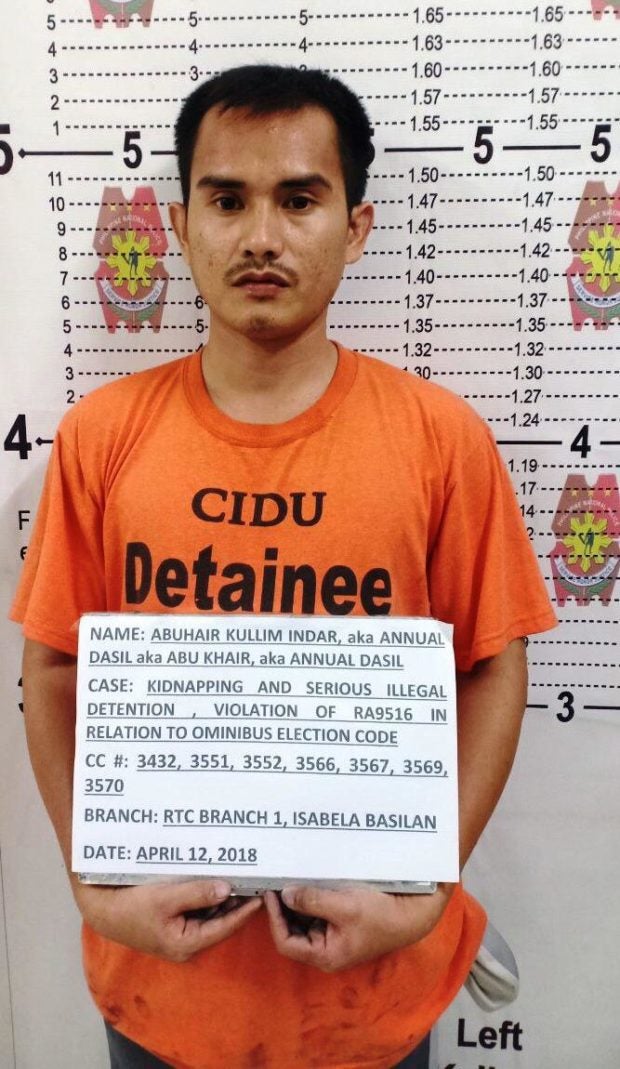