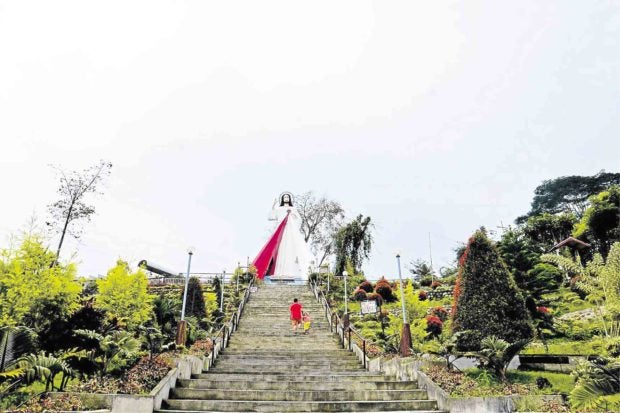 LENTEN DRAWER The Divine Mercy Shrine, home to an imposing 15-meter statue of Jesus Christ in South Cotabato, has been drawing thousands of pilgrims from all over Mindanao every Lenten season. —CONTRIBUTED PHOTO

LAKE SEBU, South Cotabato — An imposing 15-meter statue of Jesus Christ at the Divine Mercy Shrine here may have helped introduce religious tourism to this idyllic town, but it may not approve of visitors peering out in skimpy attire during Holy Week.

“Women wearing sexy short pants, tubes or spaghetti tops will be banned from the shrine since they could disrupt the solemnity of the occasion,” Jesus Equinan, the shrine’s assistant manager, told the Inquirer by telephone.

No entrance fees are collected from guests of this 4-hectare private property that offers a stunning view of the town’s rolling valley which is home to the T’boli tribe.

Equinan said they expect at least 20,000 pilgrims on Maundy Thursday and Good Friday. He urged them to bring their own food and water as their canteen may be unable to accommodate the number of pilgrims.

Traditional Catholic rituals, such as the procession for the Stations of the Cross on Good Friday, will be celebrated at the shrine, he said.

On a regular day, the shrine, which is about 7 kilometers from the main highway, receives an average of 500 visitors, Equinan said. A Mass is held every Sunday at the shrine’s chapel. Various religious images dot the shrine.

The shrine has contributed to the tourism of this town, known as the “summer capital” of South Cotabato, a province famous for the T’nalak cloth woven by the T’boli tribe and the tilapia grown in cages off Lake Sebu.

Near the shrine, guests may try out a restaurant serving the town’s popular tilapia dishes. Canopies, seats and tables near man-made pools and fountains occupy the manicured property, on which people can meditate or settle down and marvel at the lush greenery or the lake downtown.

A businessman and his wife developed the shrine in 2011 before opening it to the public three years later.

The owner, who requested anonymity for security reasons, said they established the shrine “to bring people closer to God.”

“Catholics from different places in Mindanao have been coming here to pray for miracles,” he said.

His wife, a Divine Mercy devotee, wanted a place for spiritual retreat so they developed the property and eventually opened it to people who wanted to commune with God and nature.

Just across the road from the hilltop shrine, the owners also built an accommodation facility designed for group or family retreats.

At night, the lighted statue of Jesus Christ illuminates the horizon as it stands tall at the shrine.

Saint Faustina Kowalska, a Polish nun, popularized the devotion to the Divine Mercy, which puts complete trust in Jesus Christ “as the God of Mercy.”