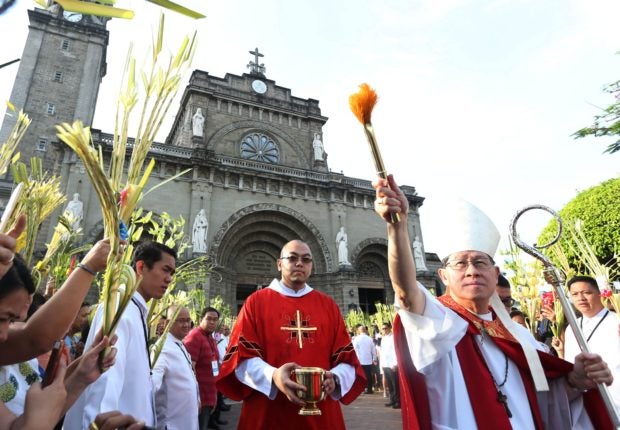 “Let us get to know Jesus more deeply for us to be able to follow him,” Tagle, the archbishop of Manila, said in his homily during Palm Sunday Mass held at Manila Cathedral in Intramuros, Manila.

“Even if we get to rest every Holy Week, I hope Holy Week is not just a vacation, not just a break, not just time for travel, but a time to know and understand deeply the humble Messiah,” he said.

He said it seemed it was easier to follow the famous or the popular because people naturally wanted fame or popularity to rub off on them.

Before the Mass, Tagle led the blessing of palm fronds at Plaza Roma as he made his way into the cathedral in a procession reenacting Jesus’ triumphant entry into Jerusalem.

Palm Sunday signals the start of Holy Week, the holiest period in Christianity.

In the Philippines, fresh young coconut leaves are braided into “palaspas,” which churchgoers wave for the priest to bless on Palm Sunday to commemorate Jesus’ entry into Jerusalem in the four canonical Gospels.

In his homily, Tagle recounted the events surrounding Jesus’ betrayal and arrest before his crucifixion.

Tagle said Jesus called his disciple Judas by his name even after the purse holder of his ministry agreed to hand him over to the chief priests in exchange for 30 pieces of silver, a story based on Zechariah 11:12-13 and found only in Matthew’s Gospel.

He also noted that Jesus’ disciples who accompanied him to the Garden of Gethsemane were asleep at the time he needed them the most.

But when they were awakened by the noise, Jesus instructed them not to resist the Roman-backed Temple police who had come to arrest him.

He said he hoped Filipinos would choose to become followers of modest leaders like Jesus, even if doing so was more difficult.

“We understand why it seems easier to replace Christ with other kings and messiahs. It is impossible for us to follow Christ because unveiling yourself, being humble, respecting those who persecute you, healing those who hurt you—that is not the way of the world. But for God, that is not impossible. It’s not easy, but with the grace of God, may we love and follow him,” Tagle said.

In Legazpi City, Albay province, Bishop Joel Baylon urged the faithful in his diocese to put their blessed palm fronds on their doors or gates to warn vote buyers in May’s midterm elections to stay away.

The palm fronds so displayed “would serve as a true message that our votes are not for sale,” Baylon said in his Palm Sunday message.

The palm fronds, he said, would be a message to politicians: “I am a Catholic. I do not sell my vote.”

Baylon warned those who had a mind to sell their votes: “If you are selling your votes, right here and now, drop your palaspas.”

In Kidapawan City, Cotabato province, Bishop Jose Colin Bagaforo called on candidates in the midterms to declare a “campaign ceasefire” for Holy Week.

Bagaforo also urged politicians to tell their supporters to refrain from using loud speakers to avoid distracting people praying inside churches during the holy days.

The bishop asked the faithful to pray for peaceful and honest elections on May 13 and to choose leaders who would serve the poor and neglected. —WITH REPORTS FROM MAR S. ARGUELLES AND WILLIAMOR A. MAGBANUA