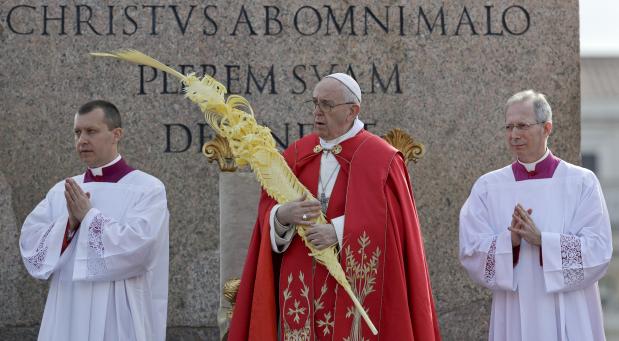 VATICAN CITY — Pope Francis warned against being judgmental and too full of oneself, including authorities in the Catholic Church, in his Palm Sunday homily during Mass in St. Peter’s Square, which was crowded with tens of thousands of pilgrims, tourists, and Romans.

The day ushers in Holy Week, which will include Way of the Cross processions around the world to commemorate the Passion, or suffering, of Jesus on Good Friday and his death by crucifixion.

Palm Sunday services recall the cries and gestures of triumph by onlookers when Jesus entered Jerusalem. But not long after, according to the New Testament, the public’s mood changed, and Jesus was arrested, mocked, scourged and executed.

“Festive acclamations and brutal torture: the silence of Jesus throughout his Passion is profoundly impressive,” Francis said in his homily.

The pope cautioned against the temptation of “triumphalism,” which he said feeds itself by “looking askance at others and constantly judging them inferior, wanting, failures.”

Francis added that “one subtle form of triumphalism is spiritual worldliness, which represents the greatest danger, the most treacherous temptation threatening the church.” He recommended humility as a way to counter such temptations.

The Catholic Church in the last decades has been rocked by revelations of pedophilia and other sex abuse by clergy and often systematic cover-ups of that by its hierarchy. The scandals have engulfed even bishops and cardinals and shaken the trust of the countless rank-and-file faithful in the church.

Sprinkling holy water, Francis blessed palm fronds and olive branches clutched by pilgrims, tourists and Romans before Mass began. He watched from steps at the foot of the obelisk in the center of the square as prelates, holding dried, braided palms, formed a circle around him. Then, cradling a braided palm, he joined a solemn procession to a canopied altar set up outside St. Peter’s Basilica.

Francis also invited people to pray for peace, especially in the Holy Land and the Middle East.

By the end of Mass, sunshine gave way to a soft, light rain and the crowd had swelled to 50,000 people, according to security officials. Francis, after removing his red robes, was driven in his white popemobile so he could wave to the crowd.

Holy Week culminates in joyous celebrations on Easter Sunday as Christians celebrate their belief that Jesus rose from the dead.