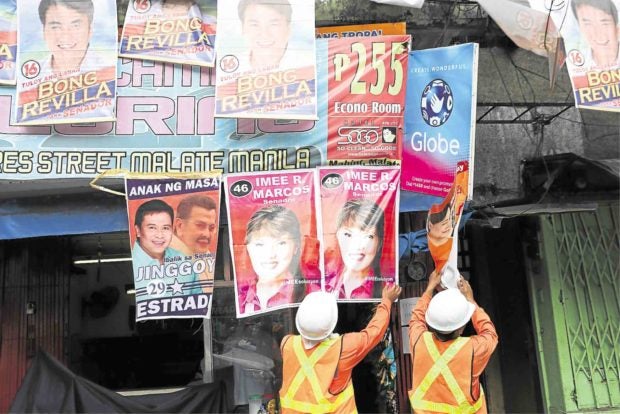 MANILA, Philippines — The Commission on Elections (Comelec) on Sunday advised the public to not remove campaign materials of candidates even if they violate rules set by the commission.

Frances Aguindadao-Arabe, Comelec director on education and information, said that it would be best to report the campaign materials rather than removing them without the permission of the candidate to avoid any possibility of being sued.

“It is not allowed as they may face charges for taking sides and destroying campaign materials of other candidates in the process, Arabe, speaking Filipino, said in an interview over AM radio station DZBB.

Arabe said that the public can post pictures of the campaign materials and tag COMELEC’s social media accounts to report them.

“We opened an email account at TALKtoCOMELEC and you can also tag us on social media and we will get the directive to the election officer and act on the complaint,” she said.

Candidates who were not able to remove their campaign materials within three days after receiving a notification from the Comelec may face disqualification.

According to her, there are currently two pending cases in Pasay City still awaiting the decision of the court for violating rules on campaign materials.