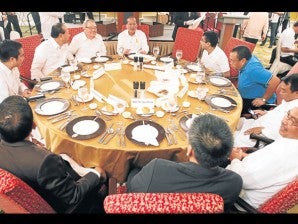 The stunning move against Chief Justice Renato Corona has all the hallmarks of the Japanese sneak attack on Pearl Harbor on Dec. 7, 1941, that opened the Pacific chapter of World War II.

President Benigno Aquino III himself gave the impeachment order in a Japanese restaurant at the Greenhills shopping center in San Juan City in a 10-minute meeting on Sunday with House Speaker Feliciano Belmonte Jr. and Majority Leader Neptali Gonzales II, according to a Philippine Daily Inquirer source.

Mr. Aquino, who was having lunch in the restaurant’s second floor, went down to talk to Belmonte and Gonzales to put the finishing touches on the battle plan to oust Corona that had been in the works since the Supreme Court issued a temporary restraining order (TRO) on November 15 against travel restrictions on former President Gloria Macapagal-Arroyo.

In a phone interview, Gonzales confirmed that he and Belmonte talked with the President before the two lawmakers went to Gonzales’  house at Wack-Wack Village in Mandaluyong City for an impromptu meeting with leaders of other political parties in the coalition.

On Monday, after the planning that was shrouded in secrecy, 188 representatives signed the articles of impeachment against Corona in the House juggernaut that lasted five hours and caught the opposition with their pants down.

House Minority Leader Edcel Lagman denounced the move as “the mother of all blackmails,” lamenting that the “derogation of our democracy is almost complete.”

The source said the House leaders were rushing to impeach Corona before Dec. 20 when the Supreme Court was  expected to issue a ruling that would allow Arroyo to spend the Christmas and the New Year holidays at her family residence at the fashionable La Vista subdivision in Quezon City.

The 64-year-old Arroyo, who is now a Pampanga representative, has been charged with election sabotage in connection with claims by a provincial administrator he heard her order a 12-0 win for administration candidates in Maguindanao in the 2007 senatorial elections. The administrator is facing accusations he attempted to cover up the 2009 massacre of 57 people in Maguindanao province.

Arroyo, who is suffering from a rare bone ailment, is under hospital arrest at Veterans Memorial Medical Center in Quezon City.

After the TRO was issued on November 15, Arroyo, who was wearing a neck brace, was rushed in a wheelchair  to the airport in a dramatic dash covered by TV networks to leave for medical treatment abroad.

The Department of Justice, however, ignored the TRO, an extraordinary measure granted courts to prevent an irreparable harm and protect a person from the awesome powers of the state.

Justice Secretary Leila de Lima said Arroyo was attempting to evade prosecution for a host of criminal offenses, including corruption and plunder.

The move against Corona, according to the source, was prompted by information that the court would void the arrest order against Arroyo early next month.

“The President did not want a repeat of the TRO fiasco and urged his men to preempt this,” the source said.

The House majority had initially planned to file the impeachment case against Corona on Tuesday but it was forced to shift gears after Supreme Court spokesperson Midas Marquez on Sunday morning warned of a House plot to fast-track the ouster of the Chief Justice.

While the Liberal Party with its 85 members and its 10 to 15 allied party-list groups led by An Waray Representative Florencio Noel could have easily met the minimum 95 signatures to impeach Corona, the source said Belmonte and Gonzales wanted to bring the number closer to the 234 who had previously signed a resolution endorsing the President’s anticorruption efforts.

“The majority wanted the impeachment as a show of force to justify their actions. That is why the President and the House leaders have been meeting with leaders of the NPC (Nationalist People’s Coalition), NUP (National Unity Party), NP  (Nacionalista Party), and the party-list groups,” the source said.

The biggest resistance came from former allies of Arroyo who had switched to the majority a year ago to ensure continued access to pork barrel funds such as the oldest representative, Pablo Garcia of Cebu province.

The source said Belmonte and Gonzales were the “real brains” of the impeachment as they handled the wheeling and dealing in the backroom to further bring up the number of signatories to more than 200.

Representative Niel Tupas Jr. said he and Representative Reynaldo Umali had worked on the impeachment complaint since the weekend for Monday’s caucus.

“We did not sleep for three days,” said Tupas, chairman of the House justice committee.

He said a study committee had been formed since September to conduct research for possible impeachment complaints against members of the Supreme Court. Two associate justices are also being targeted for impeachment for alleged bribery, according to one Inquirer source in the administration.

Some lawmakers  reported being rushed into signing up for the impeachment of  Corona but proponents of the ouster move maintained it was all above board.

Bayan Muna Representative Teodoro Casiño said the majority of the 188 members who signed the impeachment case were clueless about the eight articles used as the basis to kick out Corona when they entered the majority caucus at 2:30 p.m. on Monday.

Casiño admitted that they were not allowed to read the 57-page document which they signed as both complainant and endorser which allowed for the document to be approved without having to toil  through committee hearing or plenary voting.

The bulk of the signatures took less than one hour and Corona was formally impeached at 7:40 p.m., or less than five hours after the signatories were officially told for the first time about the charges against the Chief Justice.

Casiño said the lawmakers relied solely on the presentation made by Liberal Party bigwigs who orchestrated the impeachment case under orders of President Aquino, who had launched an unprecedented attack on the Supreme Court in nationally televised speeches and impugned the legitimacy of Corona’s appointment.

Mr. Aquino had again raised the legality of Corona’s assumption at the helm of the high tribunal, in spite of the court’s ruling that the ban on appointments of officials two months before the end of the President’s term did not apply to the judiciary.

Act Teachers Representative Antonio Tinio said the Liberal Party strategy was to hold discreet meetings with leaders of the administration coalition partners  to explain  the case in broad terms and get their commitments.

“The meetings were from morning till night the day before the caucus. Everything was hush-hush and the details were very vague. But we supported the cause,” said Tinio.

He said the lawmakers were not allowed to ask questions when they were told during the caucus that Corona was a stumbling block to reforms and that his removal was the only option.

In protest over the perceived high-handed maneuver of the majority, Tiangco resigned as chairman of the House special committee on Metro Manila development. With a report from Cathy Yamsuan