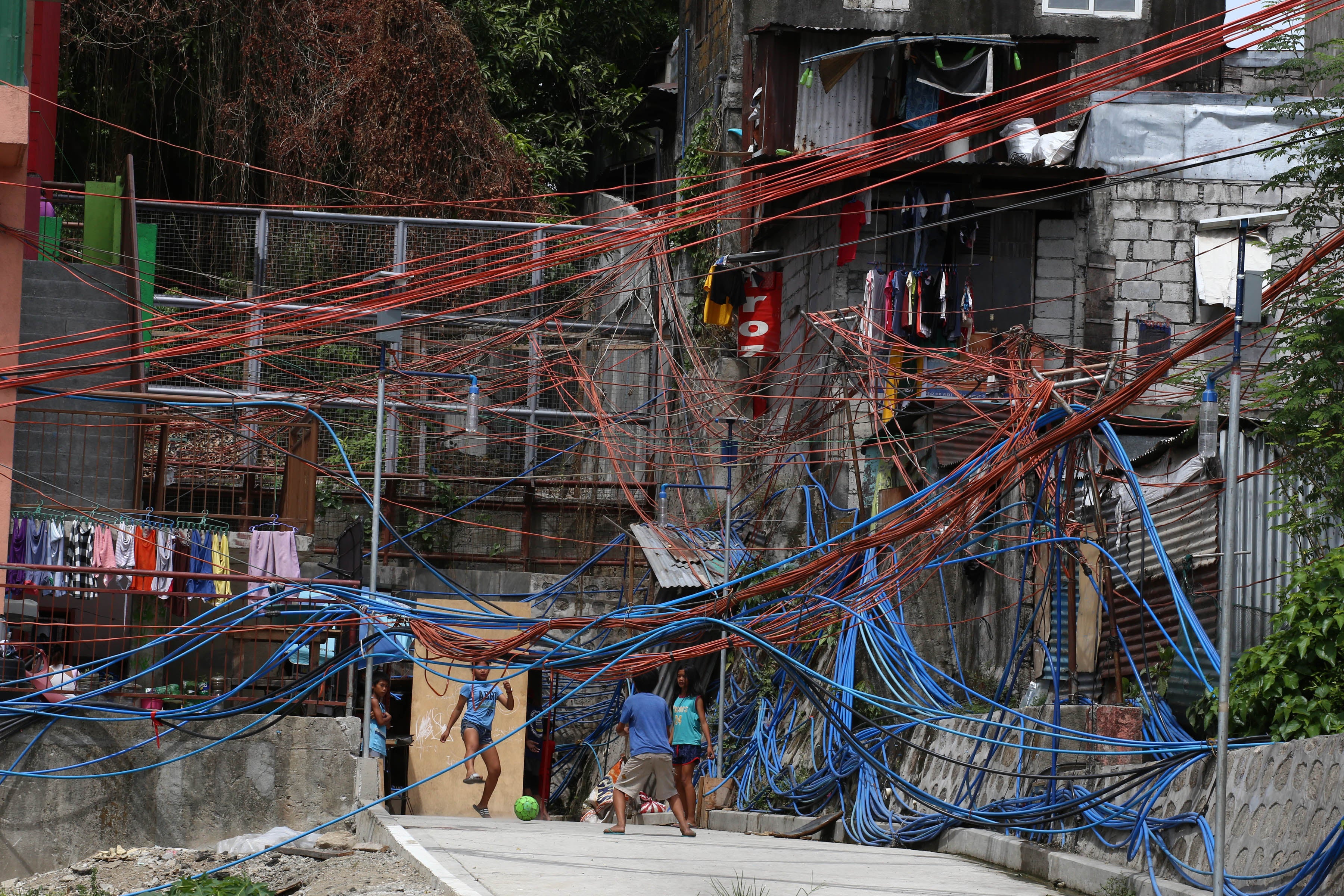 It is not only because of the colorful apartments that now house former informal settler families in the community, though.

Since 2017, “spider webs” of electric power cables and water pipes in the settlement have been an eyesore and safety hazard for the beneficiaries of the PWD-friendly project. And they have been complaining about it.

The Munting Pamayanan Village is Gawad Kalinga’s first community for PWDs in Metro Manila, and the second in the country after the Village of Hope in Palayan City, Nueva Ecija province, which was completed in 2009.

Most of the beneficiaries are vision- and hearing-impaired as well as the handicapped who used to live in ramshackle dwellings at the project site, a former Philippine Army compound used by the 1st Signal Company.

But the project remains unfinished, and now 66 households access the services of Meralco and Manila Water from an adjacent community through the exposed cables and pipes that cross a low concrete fence.

Emily Cupada, one of the beneficiaries of the PWD-friendly settlement, worries about the potential accidents that may happen due to the hazardous setup.

“The houses here are so colorful and beautiful but the water [pipes] and electric cables … are an eyesore,” Cupada said.

She said barangay officials and representatives of the city’s social welfare and development office had told them that they would fix the pipes and cables once the other buildings at the site were completed.

“They told us that we have to wait, because it supposedly takes a long time to process [our request], and it must be approved by City Hall first. They also told us, ‘You managed to wait for decades to have these houses, you could wait some more,” Cupada added.

She lives in Munting Pamayanan with her three children, two of whom are visually impaired. Cupada is thankful that the housing project gave them a new lease on life—a more positive living condition compared to the time when they used to rebuild their shanties with scraps of wood and used metal sheets.

“But we know that the setup of the cables is dangerous, especially to PWDs, and because these are within easy reach of children. People who take a shortcut to their destination enter our community and sometimes step across the water pipes and damage them,” she said.

Residents of Munting Pamayanan also complain about the risk of having their utilities connected to an adjacent community they describe as “rowdy.” They fear that troublemakers could easily jump over the low fence and create a ruckus in their village.

“We are hoping that when [the service providers] remove water pipes and electricity cables from the fence, they would build a high permanent wall to prevent security issues and conflicts with the adjacent community,” Cupada said.

The family of Romy de Luna, head of the village’s PWD association, said they had asked representatives of Meralco and Manila Water to do something about the exposed cables, but the actual works have yet to start.

“We’re still waiting for them to set up an electric post inside our village so we would have our own connection here,” De Luna’s wife Mariza said.

Officials of Barangay Escopa III, which has jurisdiction over Munting Pamayanan, said the acting village chair, Ryan Dapitan, had already spoken with Manila Water and Meralco representatives about the connections.

To be fixed soon

But the community sees the problem as a temporary logistical issue. According to barangay officials, the land where the settlement stands is historically low-lying.

“That’s why it might appear that the cables are dangling. In fact, they were positioned above the informal houses before the area was drastically developed. We were told that fixing the utilities will commence once the new buildings reach 90-percent completion,” barangay custodian Carlo Gonzales told the Inquirer.

But aside from the web of problems related to the community’s utility connections, there is the conditional nature of the beneficiaries’ housing grant, according to Jenny Espina, a resident.

Like Espina, who lives in a unit with her visually impaired husband, families in the community are granted units if they have a differently abled or a PWD relative who live with them.

“The DSWD allowed us to live here for a maximum of 25 years, if the PWD is still living. Once he or she dies, the family has to vacate the units within seven years. But what if the PWD, like my husband, is also the breadwinner of the family and our kids are still small?” Espina said.

She also worries for her neighbors who are already senior citizens, like Babyrose Garcia, 66, who lives with her visually impaired 69-year-old husband.

“Somehow, we also helped build this community by rendering volunteer hours in constructing units and other facilities. We hope our stay here will no longer be conditional,” Espina said.