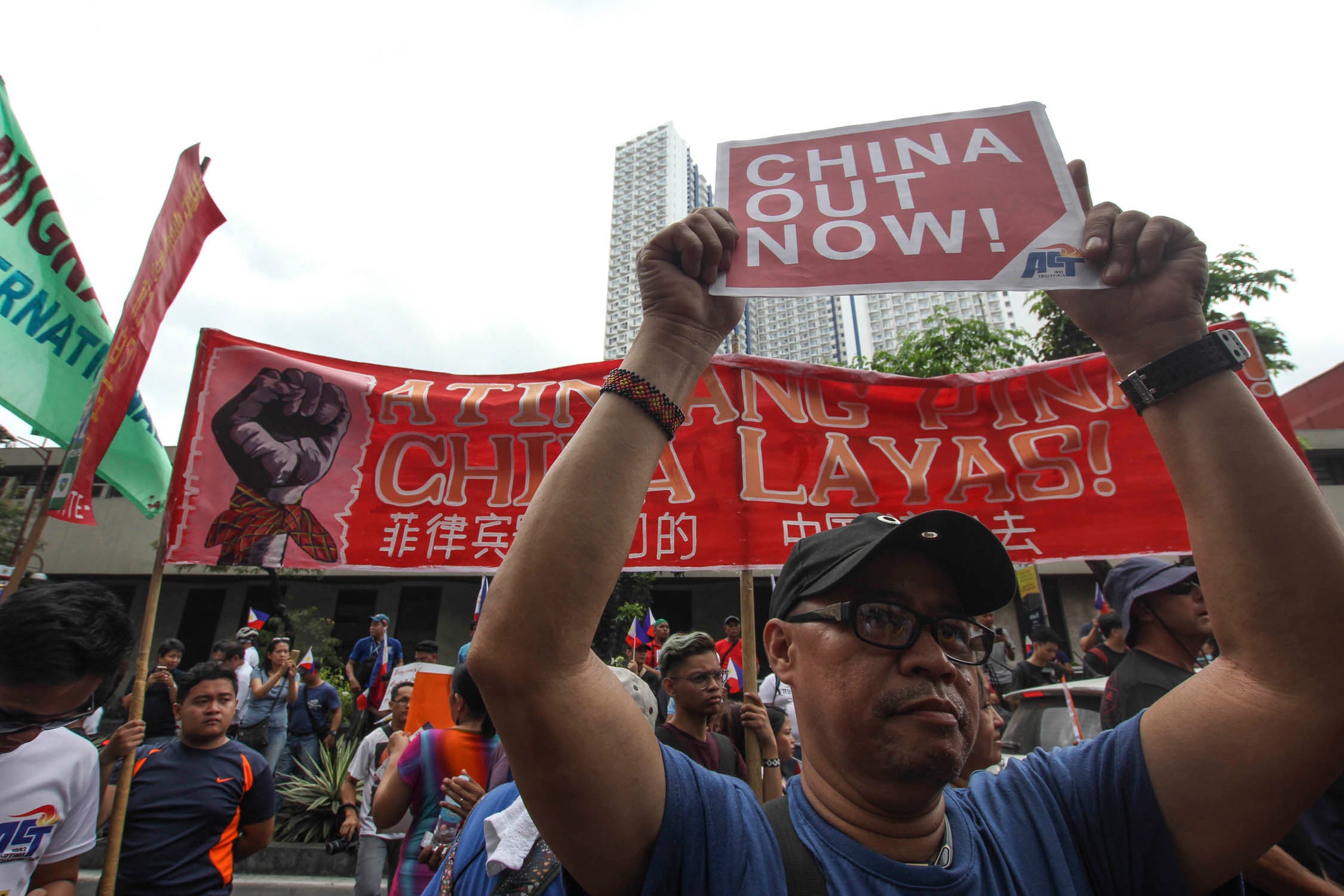 KEEP OUT Protesters against China’s incursions in the West Philippine Sea marked April 9, the national Day of Valor, with a rally outside Beijing’s consulate in Makati City. —EARVIN PERIAS

China dismissed anew Philippine claims to parts of the Spratlys in the South China Sea, saying the entire island chain has been Chinese territory for thousands of years.

China’s position was stated on Thursday by Chinese Foreign Ministry spokesperson Lu Kan in response to recent statements by Philippine officials, including President Duterte, who said last week that he would deploy soldiers on a “suicide mission” if Chinese forces “touched” Pag-asa (Thitu) Island.

Duterte made the statement after the military reported that at least 275 Chinese vessels, believed to be part of China’s maritime militia, were monitored from January to March close to Pag-asa, the biggest of nine islands and shoals occupied by Filipinos in the South China Sea.

The Department of Foreign Affairs (DFA) had called the presence of the Chinese vessels “illegal” and “a clear violation of Philippine sovereignty, sovereign rights and jurisdiction.”

“We have taken note of those remarks made by the Philippine officials,” Lu said at a press conference in Beijing. “The Nansha (Spratly) Islands are within China’s territory, for which we have sufficient historical and legal basis.”

“For thousands of years, Chinese fishermen have been fishing in these waters in the South China Sea. Their rights should not be challenged,” he added.

Presidential spokesperson Salvador Panelo on Wednesday said the Chinese vessels seen near Kota, another Philippine-occupied island in the Spratlys “have no business being there.”

He said it would be “an assault on our sovereignty” if the vessels continued “to be present in our territory.”

Malacañang also said Foreign Secretary Teodoro Locsin Jr. had “fired a salvo of diplomatic notes” to Beijing protesting against the presence of Chinese vessels near Pag-asa.

In response to Lu’s statement, Panelo on Friday said: “It is our principled stand that the peace in the West Philippine Sea should be maintained.”

China “should avoid performing acts that will place at risk the Filipino fishermen fishing in the disputed areas and at the same time cause irritants that will disrupt the current friendly relations of the two countries as well as imperil future bilateral negotiations on matters of mutual concern,” he added.

The Philippines will “remain steadfast in maintaining our claims with respect to our territory and exclusive economic zones” in accordance with the ruling of the international arbitral tribunal which nullified Beijing’s expansive claims over the South China Sea while upholding Manila’s rights to the West Philippine Sea, Panelo said.

Duterte has chosen to set aside the ruling in favor of warmer ties with the Asian economic powerhouse in exchange for aid and investments.

Lu said the disputes should be “resolved through negotiations between China and countries directly concerned including the Philippines.”

“We are committed to upholding peace and stability in the South China Sea in concert with other regional countries,” he said.

Lu said the situation there was “generally stable, and steady progress has been made in the consultations on the COC (code of conduct),” referring to a proposed mechanism to handle disputes in the South China Sea.

He also called on the Philippine government to join China in “properly managing the South China Sea issue” as well as “upholding peace and tranquility on the sea, and bringing more benefits to the two peoples.”

“We hope that the Philippine side will join us in strictly implementing the important consensus reached by the two leaders on properly resolving the South China Sea issue and safeguarding peace and stability in the South China Sea,” Lu said.

Panelo agreed that the maritime dispute could be “best threshed out through peaceful negotiation and consultation between the two countries.” That would also strengthen bilateral ties “toward a solid partnership beneficial to Filipino and Chinese communities,” he added.

“What is disappointing is that despite our friendliness and uninterrupted friendship China continually embarrasses our (government) by swarming all over our exclusive economic zone,” he said.

In a tweet on Wednesday, Locsin also cited the arbitral ruling on Manila’s claims over the West Philippine Sea and the Chinese incursions.

“The stand is that it is ours. And they took it. World’s highest court ruled that. Period,” he said.

“Now the question is how to take it back. I personally have no fear of war,” Locsin added.