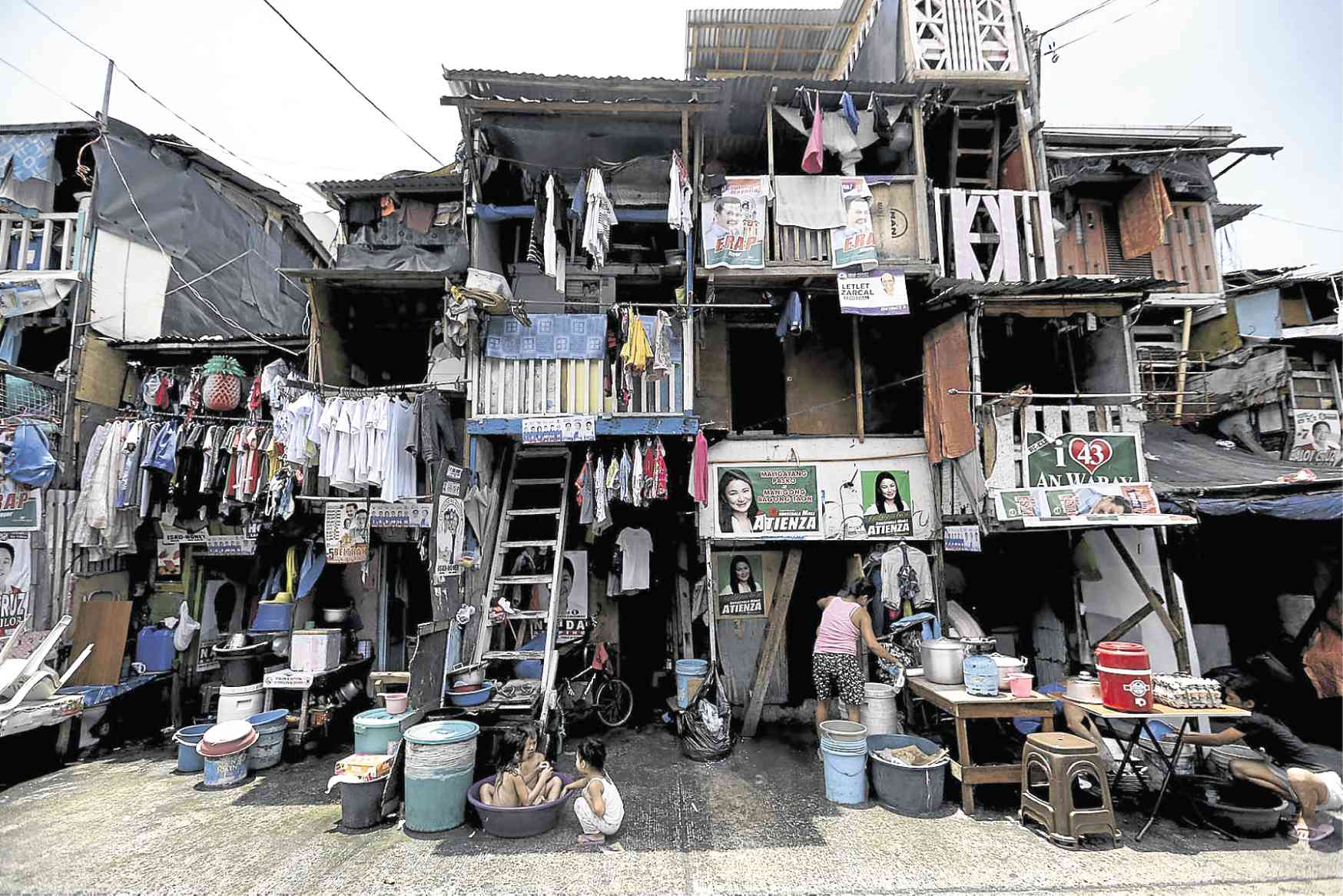 HARD STATS According to the Philippine Statistics Authority, “no less than P10,481 on the average” is needed by a family of five to meet both their monthly basic food and nonfood needs. Residents of this slum area in Binondo, Manila, may find that hard to believe. —RICHARD REYES

A monthly budget of P7,337 that the Philippine Statistics Authority (PSA) said was enough to feed a family of five translates to less than P50 for three meals a day for every family member, lower than the Bureau of Jail Management and Penology’s P60 daily budget for food for every inmate, according to a senatorial candidate.

“If that is the standard of the PSA, life may even be better for prisoners or inmates. At least they don’t have to worry about paying for electricity, water and rent,” Ding Generoso said on Thursday in a statement.

Generoso, former spokesperson of a consultative committee created by President Duterte to draft a proposed federal Constitution, recalled that the Food and Nutrition Research Institute had determined that in 2015, a Filipino would need at least P88 a day to meet calorie and nutrition requirements.

On Wednesday, the PSA said the poverty threshold was set at “no less than P10,481 on average,” the amount needed by a family of five to meet both their monthly basic food and nonfood needs.

This means that each member, on average, is allocated a budget of just P70 a day.

Labor groups on Thursday urged the PSA to reevaluate the poverty threshold, lamenting that the amount did not reflect the current expenses of families.

Sonny Matula, chair of Nagkaisa labor coalition, said the monthly budget that the PSA construed as enough for a family to meet its needs was just a little higher than the P60 subsistence daily allowance of prisoners.

Asked if the amount set by the PSA was enough for a family of five to survive, presidential spokesperson Salvador Panelo said: “It might depend on the lifestyle of the family. If you ask the poor, they might say that they will be content to eat rice with salt.”

The Trade Union Congress of the Philippines (TUCP) said that if the PSA maintained this computation, workers might find it difficult to press the government and the private sector for a just wage.

TUCP president Raymond Mendoza said employers could justify their stand against a significant wage increase by citing the current minimum wage as already above government standard.

At present, the highest daily minimum wage in the country is P537, which is enjoyed by workers in Metro Manila.

Partido Manggagawa (PM) said a family of five, especially those in Metro Manila, would need a budget of at least P39,000 a month. Of this amount, 44 percent is allocated for food.

PM chair Rene Magtubo pointed out that PSA’s computation did not seem to take into account realities consumers were facing.

“Out of the P7,337 food budget of PSA, we guess that P2,000 is allotted for rice. Such a budget can only buy 60 kilos of P32 NFA (National Food Authority) rice—which is hard to find in the market—for one month or two kilos per day to be shared by five people,” Magtubo said.

“The Duterte administration, through the PSA’s too conservative numbers, aims to present diminishing statistics on the income gap, poverty gap and severity of poverty, and thus silence the deafening demand of the people for living salaries and wages,” said ACT Teachers Rep. Antonio Tinio.

Even the P10,510 received by the lowest-paid government employee is not enough to keep families afloat, Tinio said.

Professionals like public school teachers, who currently receive a minimum salary of P20,179, are still forced to take out multiple loans to meet their needs, he said. —REPORTS FROM JEROME ANING, JOVIC YEE, JULIE M. AURELIO AND MELVIN GASCON