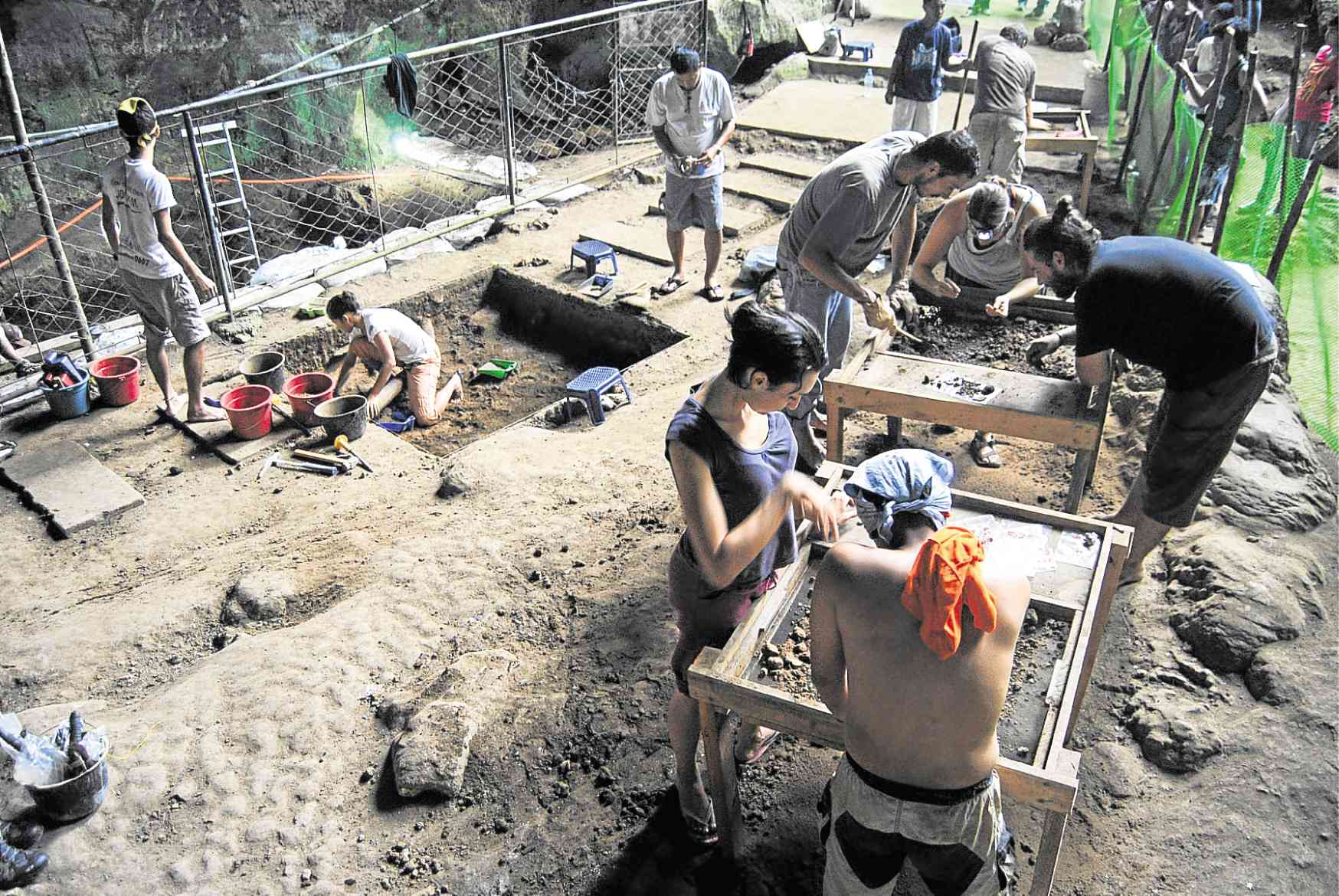 OLDER THAN TABON MAN An international team found fossilized remains of a new member of the human family in Callao Cave in Peñablanca, Cagayan province.—AFP

Thirteen fossil bones and teeth excavated in a cave in the Philippines represent an enigmatic previously unknown human species, probably small in stature and possessing an unexpected mix of archaic and modern traits, scientists said on Wednesday.

The discovery of the remains of at least three individuals from this species, named Homo luzonensis, in Callao Cave in northern Luzon marked the second time in the 21st century that a bygone member of the human family has been found on Southeast Asian islands.

A team of scientists from the University of the Philippines (UP) found the fossilized remains in Peñablanca, Cagayan province, in 2007, 2011 and 2015. They were unable to extract DNA but did determine that one of the individuals lived 67,000 years ago and the other, 50,000 years ago.

The fossils are the earliest known human remains in the Philippines, even preceding the first Homo sapiens dated to 30,000 to 40,000 years ago discovered on Palawan Island, according to Mijares.

In 2003, fossils of another island-dwelling species—Homo floresiensis, dubbed the “hobbit” due to its diminutive size—were unearthed in a cave on the Indonesian island of Flores, some 3,000 kilometers from the Luzon site.

There is no indication the two species interacted or were closely related. 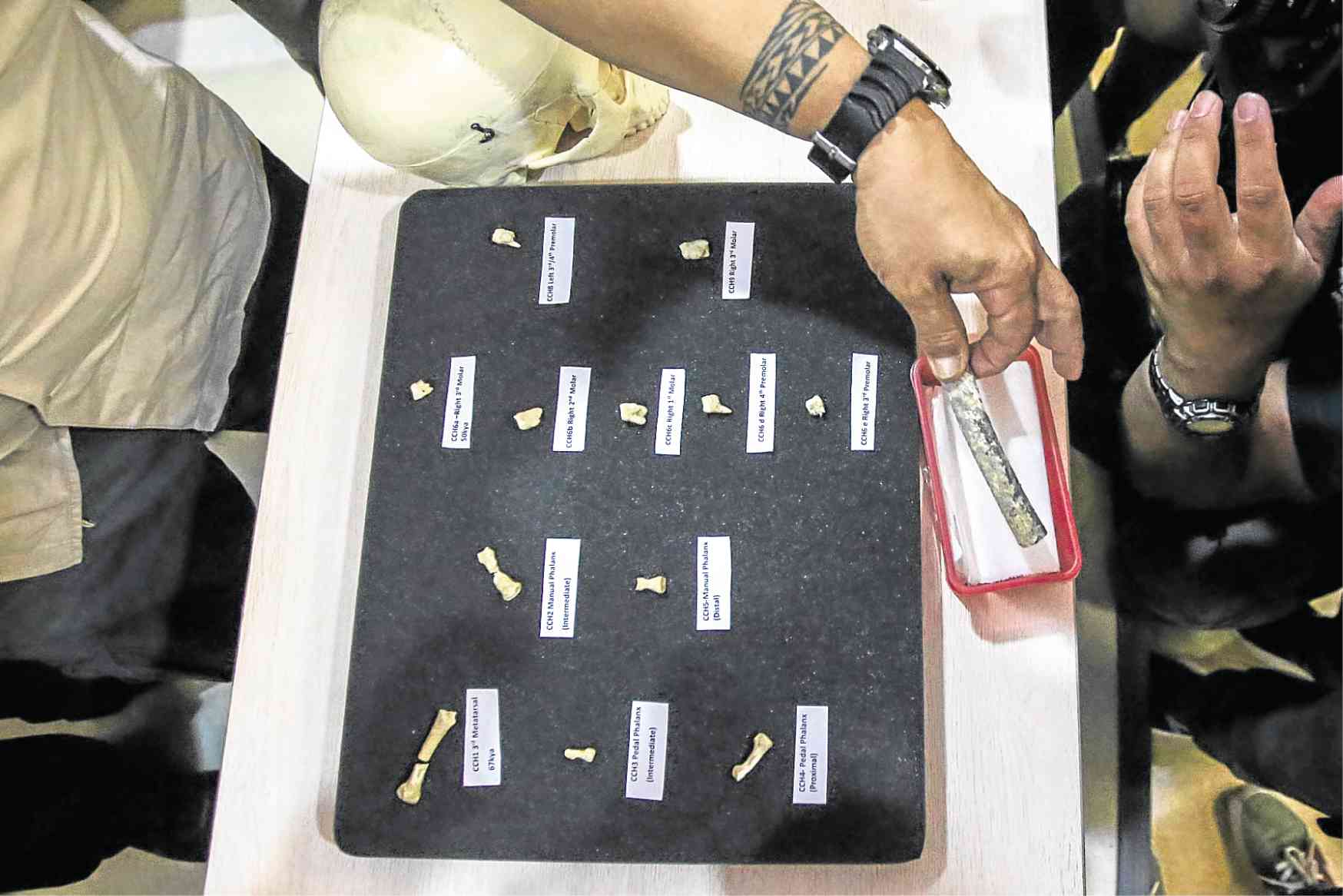 Thirteen fossil bones and teeth of Homo luzonensis were presented to the media on Thursday. —AFP

The scientists said they could not rule out the possibility that the arrival of our species in the region contributed to the demise of H. luzonensis.

The “hobbit” also disappeared about 50,000 years ago at the same time H. sapiens was spreading through the region.

The Luzon and Flores discoveries demonstrate that the story of human evolution is more complicated than previously understood, with Asia offering up surprises, potentially with more to come, the researchers said. 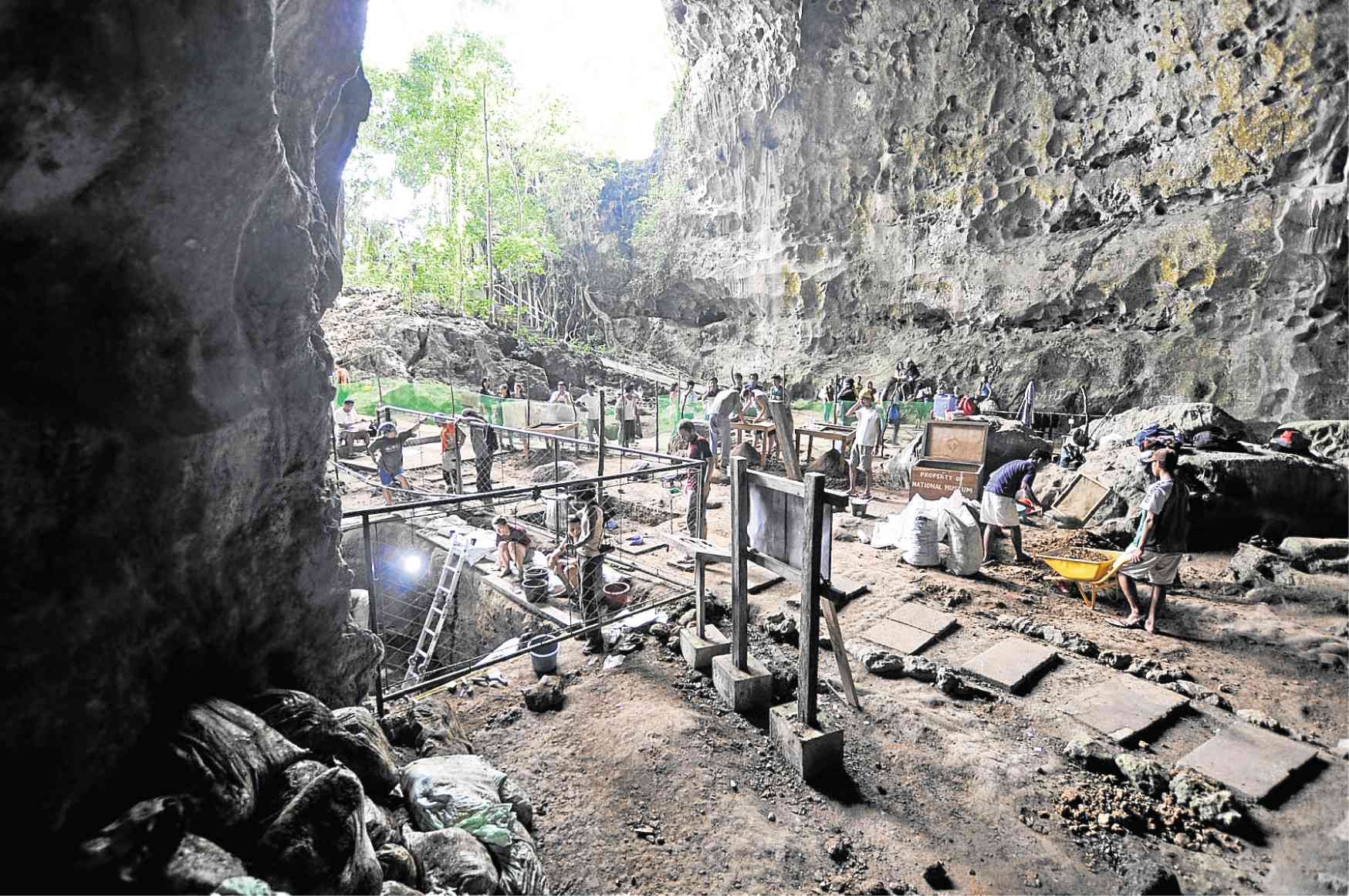 EXCAVATIONS Members of the Callao Archaeological Project go about their work at the seven-chamber Callao Cave.

“(This archaelogical find) highlights a singular mosaic of morphological characteristics that differentiates Homo luzonensis from other species of the genus Homo and underlines the major role played by Island Southeast Asia in the evolutionary history of hominins,” Mijares said.

The fossils, which scientists named “Ubag” derived from a mythical caveman, were dug up from a supposed “sedimentary level” just about 3 meters below the ground surface of Callao’s cave floor.

Before the confirmed discovery of H. luzonensis as a new human species, scientists referred to the fossils found in the cave as the “Callao Man.”

“This singular combination of characters clearly distinguishes it from other representatives of the genus Homo, especially the species known in Southeast Asia, such as Homo sapiens and Homo floresiensis,” Mijares said. 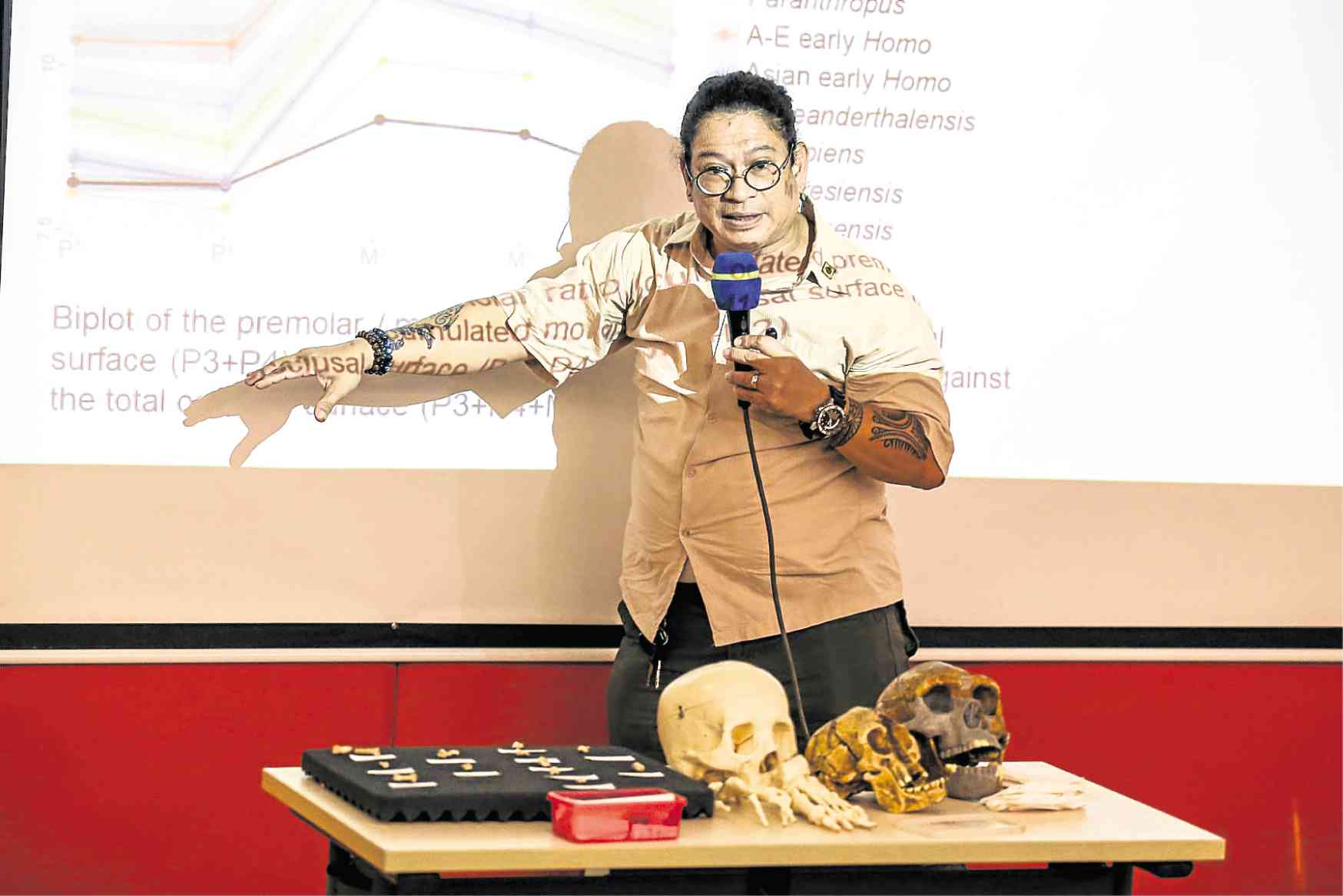 Their leader, Armand Salvador Mijares, presented their findings on Thursday at the College of Science auditorium of the University of the Philippines Diliman. —AFP/JAM STA. ROSA

Scientists noted the H. luzonensis’ curved finger and toe bones, which supposedly suggested that climbing was still an important activity for this species.

“That is part of adaptation, as humans are known to have to ability to adapt to our environment,” he said in an interview.

Funded by grants from the UP and foreign donors, Mijares carried out the archaeological study along with Florent Détroit of the National Museum of Natural History in Paris, Australian zooarchaeologist Philip Piper and geochronologist Rainer Grün.

According to Mijares, the discovery of H. luzonensis highlights the importance of Southeast Asia as an evolutionary region, and sets up the Philippines as a major area for evolutionary research.

It, however, also raised more questions, Mijares said, such as the mystery on the species’ lineage, how and when its people reached Luzon Island.

The team said the H. luzonensis was believed to have arrived on the island either through a “directed, interisland crossing” or by means of “accidental crossing,” such as getting swept off by a big tsunami.

How big were they?

The researchers were circumspect in describing the physical appearance and lifestyle of H. luzonensis, known only from a sparse assemblage of hand and foot bones, and teeth from two adults and one juvenile, with no skull fossils.

Based on tooth size in particular, it appears it might have been much smaller than H. sapiens, but it is unclear whether it was as little as the “hobbit,” which was roughly 1-meter tall.

“We have to stay cautious about it, especially because people will immediately have Homo floresiensis in mind as a ‘model’ for the physical appearance of Homo luzonensis, which was certainly not the case,” said Détroit, a paleoanthropologist.

“We can only speculate but it might be only in the range of a pygmy Homo sapiens,” Mijares said.

The research was published in the journal Nature.

Based on animal bones with butchering marks found at the site, it appears these people ate meat and may have used stone tools, Détroit said.

The fossils from the seven-chamber cave boasted a combination of anatomical features setting it apart from other human species.

There’s no sign that H. luzonensis encountered any other member of the Homo group, Détroit said in an e-mail.

Our species isn’t known to have reached the Philippines until thousands of years after the age of the bones, he said. 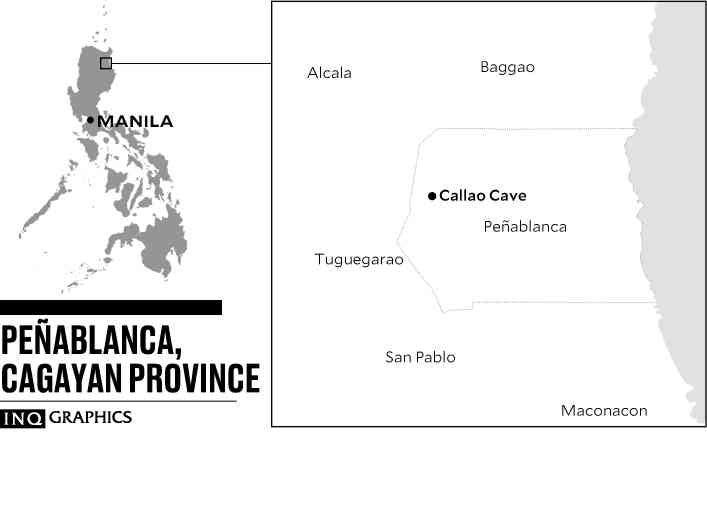 But a human relative was on Luzon more than 700,000 years ago, as indicated by the presence of stone tools and a butchered rhino dating to that time, according to Detroit.

It might have been the newfound species or an ancestor of it, he said.

More diggings and better protection of the popular limestone cave complex where the remains were unearthed are planned. —WITH REPORTS FROM AP