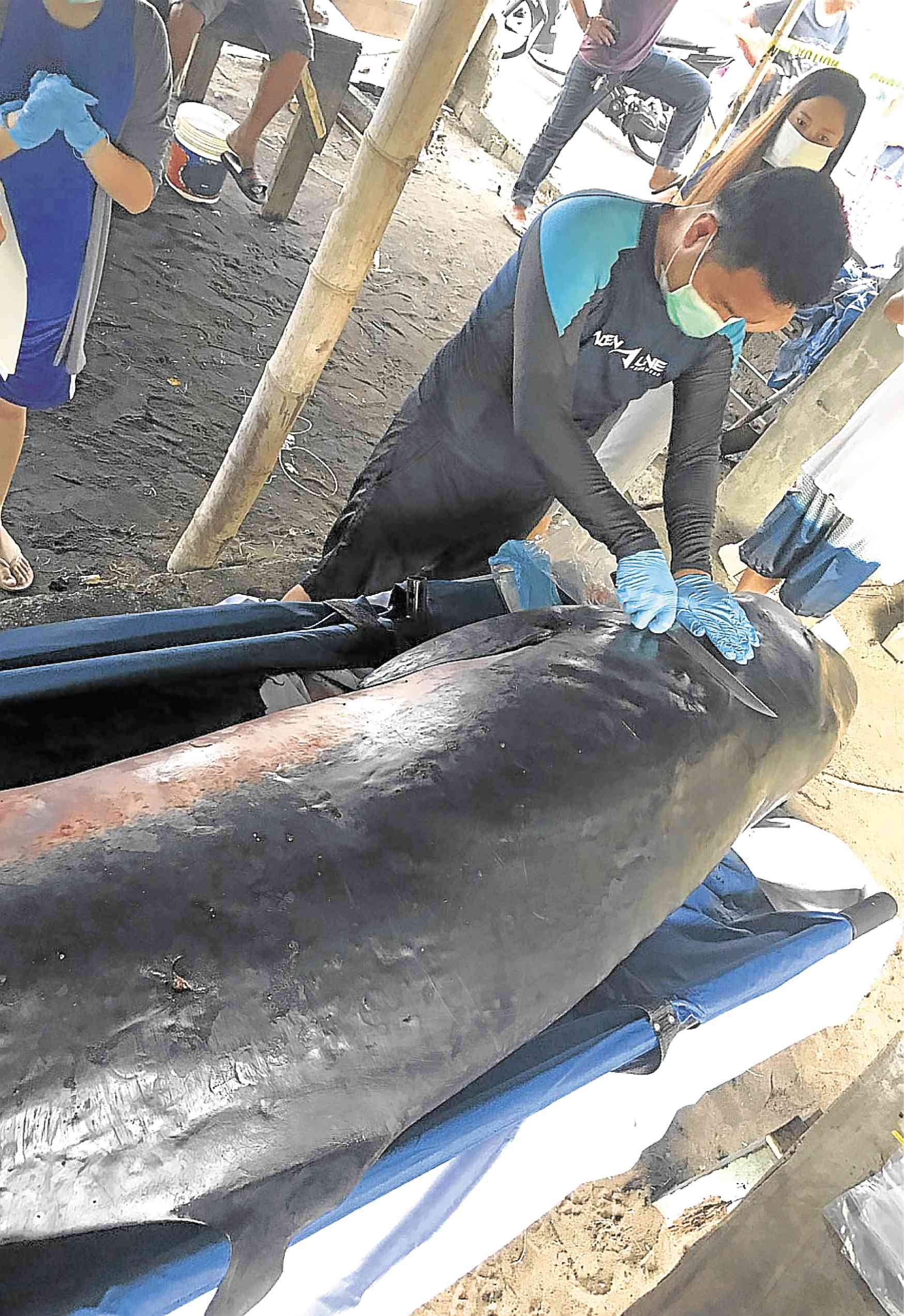 KILLER PLASTICS Plastic wrappers and trash (below) were pulled out of the belly of a pygmy sperm whale that beached in the Batangas town of Calaca on April 10. It died while undergoing treatment on April 11. —PHOTOS COURTESY OF THE BUREAU OF FISHERIES AND AQUATIC RESOURCES

SAN PEDRO CITY — About a half kilogram of garbage, mostly discarded food packs, foil wrappers and hard plastic pieces from a furniture, was found “blocking” the stomach of a pygmy sperm whale (Kogia breviceps) that died 10 hours after it washed ashore in Calaca town in Batangas province.

It was the second marine animal that beached and died shortly this week after a pantropical spotted dolphin (Stenella attenuata) was stranded in Padre Burgos town, Quezon province, on April 9.

The animal kept “rotating 180 degrees” in water that suggested it was in “deep pain” and discomfort, said Marco Espiritu, a Bureau of Fisheries and Aquatic Resources (BFAR) veterinarian in Cavite, Laguna, Batangas, Rizal and Quezon region.

“When we saw it, we already had the feeling it wouldn’t make it. But still, we tried rehabilitating it (by) giving it vitamins,” Espiritu told the Inquirer by telephone on Thursday.

Espiritu conducted the necropsy and said the whale, aside from “plastic impaction,” suffered from severe parasitic infection as he also found roundworms in its body.

Espiritu said the plastic prevented the whale from digesting any more food, rendering it “weak and vulnerable” to shark attacks. 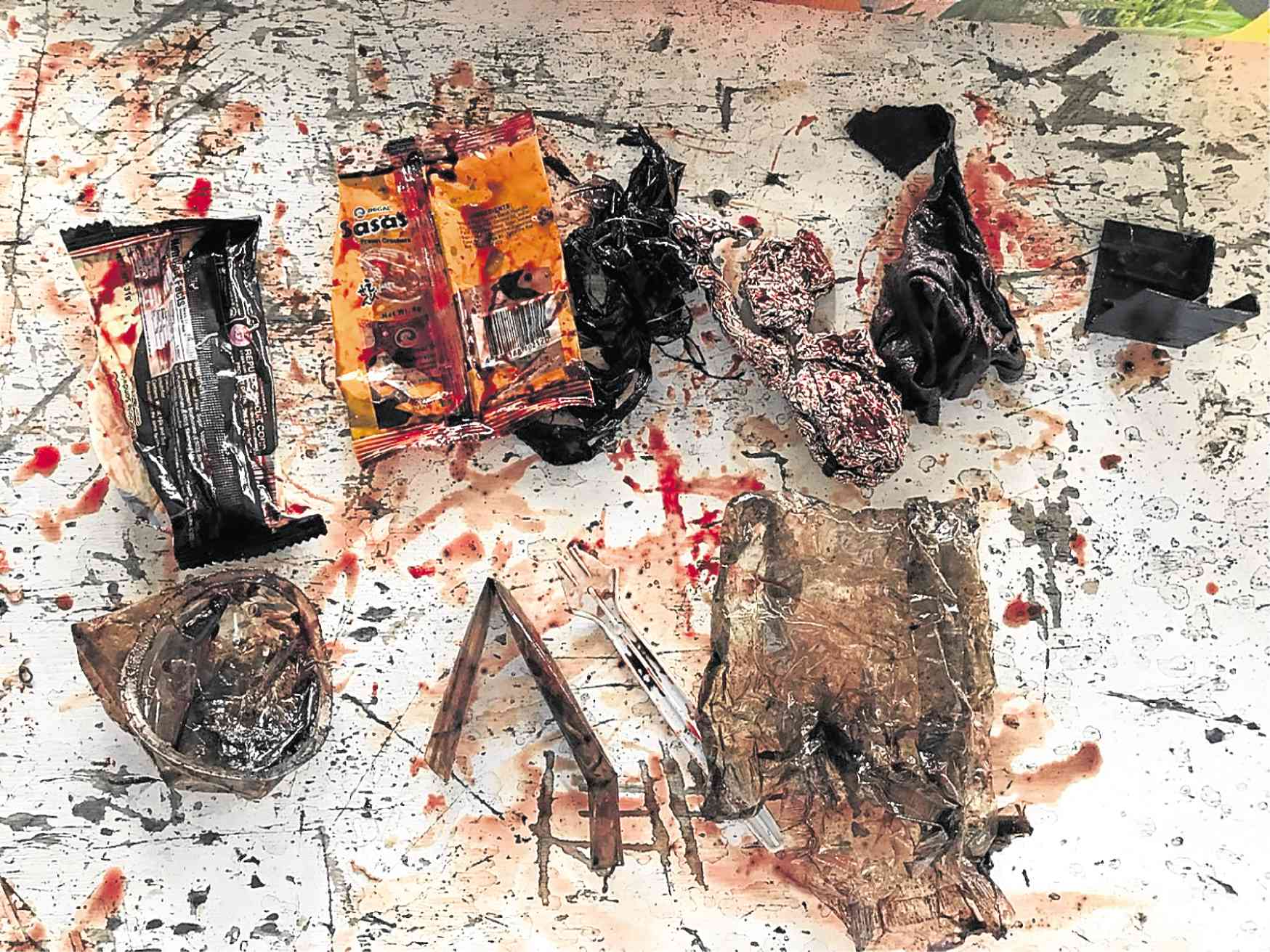 He said the whale may have come from the West Philippine Sea although the species is widely distributed in the Philippines and a “common strander,” just like the spotted dolphin found on the shore at Barangay Marao in Padre Burgos.

“(The dolphin’s) a tricky case because we found its stomach empty, meaning it had not eaten for two to three weeks,” Espiritu said.

The BFAR even tried to refloat the female dolphin, which weighed 60 to 70 kg and was about 1.98-meter-long (6.5-foot-long), before it died. They took specimen samples from both marine animals for further tests.

In March, a male Cuvier’s beaked whale (Ziphius cavirostris) also beached and died in Compostela Valley, with 40 kg of plastic trash found in its stomach.

Espiritu said the stranding of two marine mammals in Southern Luzon in a week may have just been a “coincidence,” although he noted an increase in the number of marine wildlife that had died after ingesting plastic since the year began.

“This says a lot about environmental pollution,” Espiritu said.

Environmental group Greenpeace earlier said at least three whales and a dolphin had died in Davao Gulf, while a number of whales, dolphins and turtles had suffered the same fate in Thailand and Indonesia.