4 killed in Indian election violence as voting kicks off 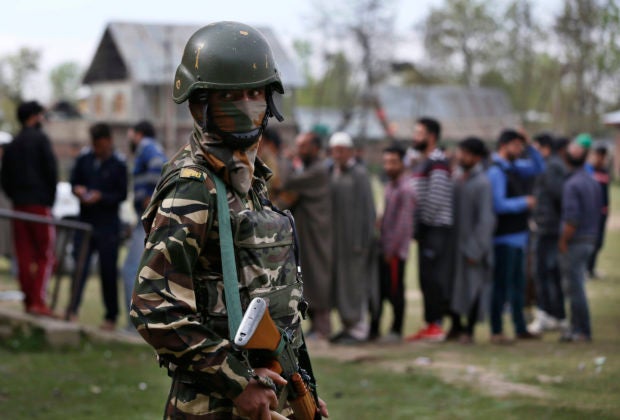 An Indian soldier guards as Kashmiri voters queue up to cast their votes outside a polling station at Shadipora, outskirts of Srinagar, Indian controlled Kashmir, Thursday, April 11, 2019. Voters in 18 Indian states and two Union Territories began casting ballots on Thursday, the first day of a seven-phase election staggered over six weeks in the country of 1.3 billion people. (AP Photo/Mukhtar Khan)

One election official was killed in an alleged attack by suspected insurgents in India’s remote northeast, the Election Commission said.

Violent clashes were also reported elsewhere in Andhra Pradesh  state, where voters are casting ballots for 25 members of India’s lower house of Parliament, the Lok Sabha, and 175 state assembly seats. Another person was killed by government forces during a protest in disputed Kashmir.

Outside of Andhra Pradesh, voting was taking place Thursday in 17 other Indian states and two Union Territories in the first of a seven-phase election staged over six weeks. Turnout was estimated at more than 60% of voters.

At least 15 electronic voting machines were damaged by some angry voters during the voting in several states, Chandra Bhushan, an election commission official, told reporters.

With 900 million of India’s 1.3 people registered to vote, it is the world’s largest democratic exercise. Over the course of the election, 543 Lok Sahba seats will be decided from about a million polling stations across India.

With Modi as their frontman, the BJP won a clear majority in 2014 elections. Under the leadership of political dynasty scion Rahul Gandhi, India’s National Congress party, which ruled the country for more than half a century since the 1947 independence, has struggled to coalesce India’s many opposition parties into a coherent effort that could go head-to-head with the BJP.

Surveys show the ruling party projected to come out first again in this year’s polls, though with a smaller mandate.

Supporters of Modi say the tea seller’s son from Gujarat state has improved the nation’s standing in the world. India’s economy has continued to grow under Modi, jostling with the United Kingdom for the fifth-largest in the world.

“I vote for the progress of my country,” said businessman Manish Kumar after casting his ballot for the BJP in the Ghaziabad district of Uttar Pradesh state.

Tapan Shome, an accountant, said he and his wife voted “to make India a good, prosperous country.” /gsg