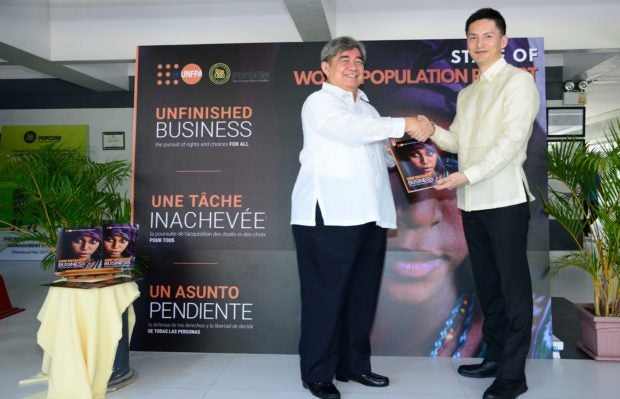 POPCOM Undersecretary Dr. Juan Antonio A. Perez III with UNFPA Philippines Representative Iori Kato at the turnover on Wednesday of the State of World Population 2019 Report.

MANILA, Philippines — The United Nations Population Fund (UNFPA) reported that the Philippines’ population grew by 1.6 percent annually from 2010 to 2019.

According to the report, the annual population growth rate in the country is faster than India (1.2 percent), the United States (0.7 percent) and China (0.5 percent).

UNFPA’s report also showed that the country’s annual population growth rate is among the highest in the Southeast Asian region along with Malaysia, Singapore, and Cambodia, which also reported an annual growth rate of 1.6 percent.

The Democratic Republic of Timor-Leste, had the highest annual population growth rate in the region at 2.2 percent.

The Philippines’ current population of 108.1 million, the report added, is 40 million more than the 1994 population of 68.2 million.

Only 5 percent of the population are aged 65 and above.

Amid the rising population, UNFPA hailed the government’s efforts to implement family planning methods in the country through the revamped National Program on Population and Family Planning (NPPFP) which would accelerate the full implementation of the Responsible Parenthood and Reproductive Health Act.