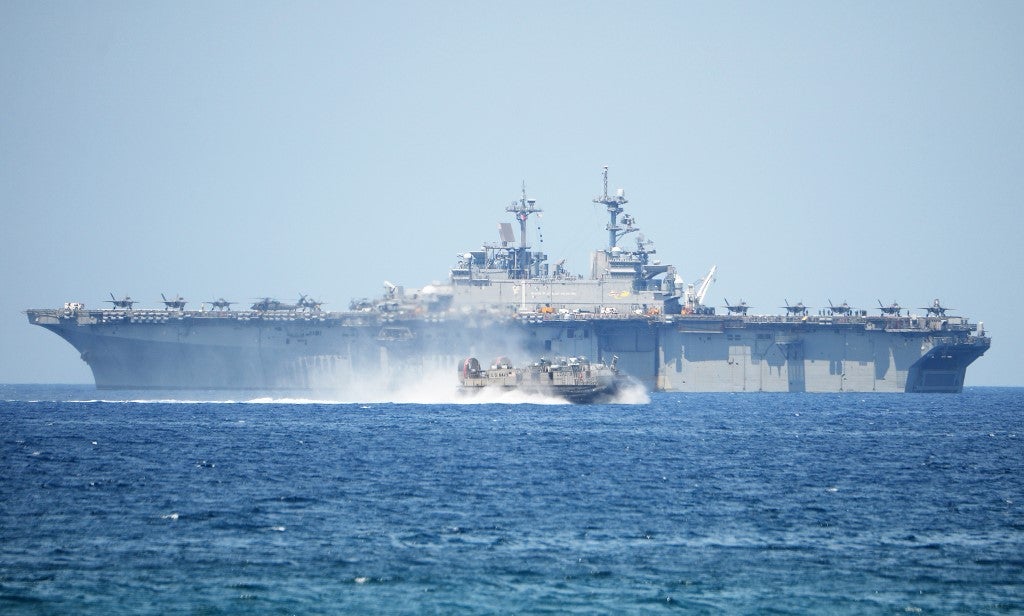 A US Navy hover craft speeds past the USS Wasp, US Navy multipurpose amphibious assault ship, during the amphibious landing exercises as part of the annual joint US-Philippines military exercise on the shores of San Antonio town, facing the South China sea, Zambales province on April 11, 2019. (Photo by TED ALJIBE / AFP)

The vessel was in the area for long-running US-Philippine military drills, which come as Manila pushes back against the recent presence of hundreds of Chinese ships near its Pag-asa (Thitu) island.

“We can’t disclose the official movements of the USS Wasp for security reasons, but they have been operating in the South China Sea region… as part of the exercise,” US spokeswoman Second Lieutenant Tori Sharpe told reporters.

President Rodrigo Duterte had largely set aside the once-tense dispute over China’s expansive claims to the resource-rich waterway, but told Beijing last week to back off over the “swarming” Chinese boats.

The Philippines called the boats’ presence “illegal” and Duterte threatened China with possible military action if it touches the island.

China claims most of the sea, including waters and islands close to the shores of its neighbours. It has built artificial islands and military installations that the US warned could curtail right of passage by non-Chinese vessels.

The Philippines, Brunei, Malaysia, Taiwan and Vietnam have also all staked claims to various islands and reefs in the sea that is thought to have rich petroleum reserves deep beneath its waters.

The Wasp’s participation in the exercises represents “an increase in military capability committed to a free and open Indo-Pacific region,” the US navy said in a press release on its arrival last week.

The two-week Balikatan (Shoulder-to-shoulder) exercises, which opened April 1, include some 4,000 Philippine, 3,500 American, and 50 Australian troops.

Duterte had threatened to quit the drills as part of his pivot away from former colonial master the US and toward China, but they have carried on after being toned down for a few years.

As Duterte has adopted a friendlier stance with China, the US has moved to shore up its ties with Manila and assert its presence in the South China Sea.

US Secretary of State Mike Pompeo pledged in March to come to the Philippines’ defence in case of an “armed attack” in the sea, a clear assurance Philippines leaders had long sought.

On Thursday a spokesman from China’s Ministry of Foreign Affairs re-asserted China’s claim to the island chain that includes Pag-asa, and said they had “consistently advocated the settlement of disputes in the South China Sea through negotiations with countries directly involved.”

Duterte has been criticised at home as being too eager to grow ties with Beijing, and giving up too much leverage on the South China Sea issue.

China has been reserved in its comments regarding Manila’s recent uptick in assertiveness over the Pag-asa island, saying that it was working with the Philippines and looking into the reports regarding Chinese ships.