Tens of thousands march in Australia for higher wages 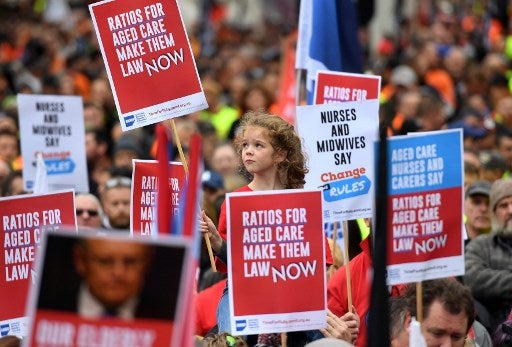 People take part in a march for better work conditions and higher wages in Australia, in Melbourne on April 10, 2019.  AFP

MELBOURNE, Australia — Tens of thousands marched for better work conditions and higher wages in Australia Wednesday, bringing the city of Melbourne to a standstill, ahead of national elections in May.

The opposition Labor party wants to make stagnant wages a focus of its election campaign, with its union allies claiming “Australians have seen the largest fall in their living standards in 30 years.”

The governing conservative Liberal-National coalition has argued the best way of boosting wages is through company tax cuts.

Many demonstrators wore fluorescent “hi-visibility” workwear and carried banners with “Change the Rules” written on them.

Some Labor supporters have argued for a slew of workers to receive higher minimum wages and a cap on the number of foreign workers entering the country. /ee